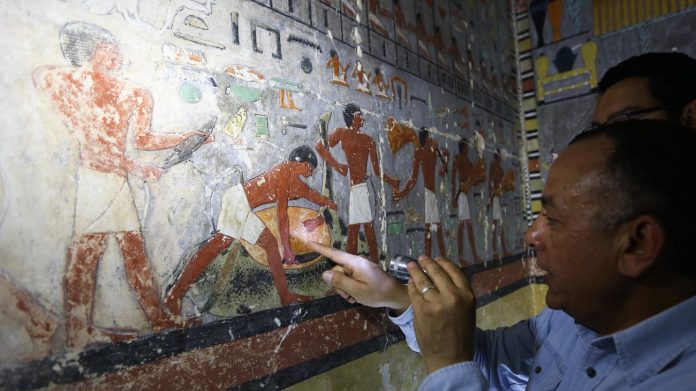 In the city of the dead Saqqara, discovered by Egyptian archaeologists a tomb, whose age is estimated to be 4,000 to 4,500 years. The ancient Egyptian burial ground, Saqqara is located about 20 kilometers South of Cairo. The well-preserved tomb of a high-ranking dignitary of the fifth dynasty, is decorated with colorful bas-Reliefs and inscriptions. Archaeologists of the burial chamber discovered in March, it was presented until now from the Egyptian Ministry for antiquities to the Public.

The Ministry called the discovery unique. Particularly, a richly decorated antechamber is well preserved, while a sarcophagus made of limestone robbers in the past, from the grave completely destroyed. The L-shaped grave begins with a small passage that leads down into an antechamber, and from there to the much larger burial chamber. The Reliefs show the tomb owner named Chuwi sitting in a table with the victim.

Chuwi lived according to the figures, probably at the time of the fifth dynasty, which ruled from 2500 to 2300 BC in Egypt. The ceremonial Opening of the burial chamber antiquities Minister Khaled al-Enani ambassadors and cultural attachés from more than 20 countries invited.

The team of archaeologists had discovered several tombs from the fifth dynasty. Recently, the scientists on a granite pillar were pushed in addition to the name of the Queen Setibhor, is likely to have been the wife of king Djedkare Isesis, the eighth and penultimate king of the fifth dynasty.