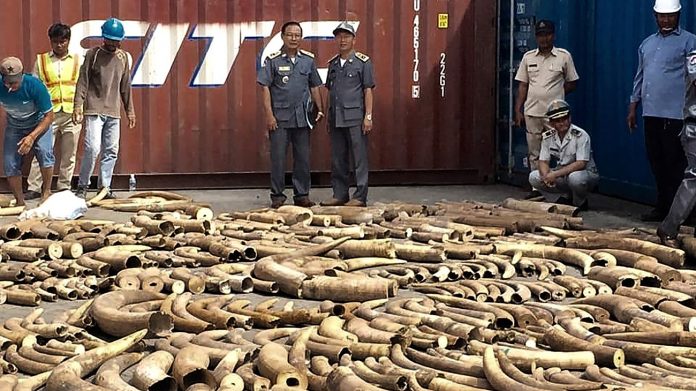 In Cambodia, authorities made the largest discovery of illegal ivory in the country’s history. 1.026 Elephant tusks weighing more than 3.2 tons had been seized in the port of the capital city of Phnom Penh, said the head of the customs authority, Sun Chhay, the AFP news Agency. Accordingly, the tusks were found on Thursday in an abandoned Container.

The authorities in the Southeast Asian country, had acted on a tip from the U.S. Embassy, said Chhay. Thus, the ivory from Mozambique arrived, and was already arrived in the past year in the port of Phnom Penh. The unknown owner of the container had not picked up the cargo. Chhay said he did not know whether the cargo was intended for sale in other countries.

in Spite of the prohibition, in accordance with the protection of species agreements and various protection measures poachers are killing each year, just 20,000 elephants and 1,000 rhinos, because of the Tusks and horns on the black market to bring in billions. Ivory is especially true as a piece of jewelry, while in the Traditional medicine, Rhino Horn and Pangolin scales as a supposed remedy against cancer, or as an alleged aphrodisiac are asked – completely unjustified. Neither of powdered bone or Horn or scales are effective.

Since 1973, is regulated by the CITES Convention on the international trade of approximately 5,600 of animal and 30,000 plant species. They are listed in three annexes, which discuss the States parties every two to three years:

Annex I contains endangered species. African elephants belong to it – except for those populations in Botswana, Namibia, South Africa and Zimbabwe – as well as rhinos and depending on the origin of the white rhinoceros. The international, i.e. cross-border trade in species or their products for commercial purposes is prohibited.

Appendix II includes those of African elephants, which are not listed in Annex I. Also, the Tibetan wild ass can be found here or the Argus pheasant, as well as thousands of other species. The trade is subject to strict conditions. The type must not be endangered thereby. Most of the species listed in this Annex.

Appendix III lists species that have been made by a country in its territorial area under protection.