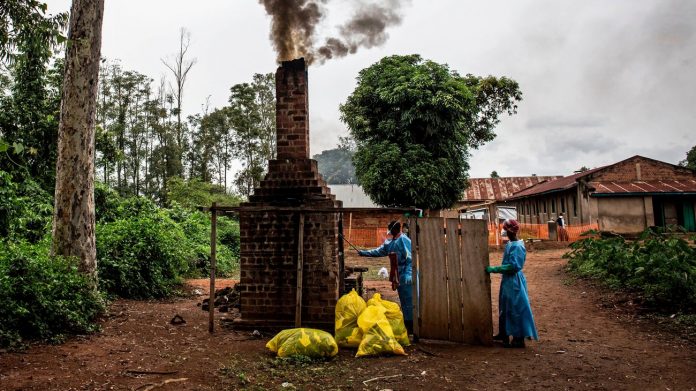 In the Democratic Republic of the Congo have died since the Ebola outbreak two months ago, 201 people of the consequences of the disease. As the Ministry of health, it was confirmed the Ebola Virus so far in 291 cases. More than 28,000 people had been vaccinated against the disease.

The latest outbreak is concentrated in the city of Beni and its surroundings in the troubled province of North Kivu. There are several militias and rebel groups are active, what is there helpers difficult, and patients quickly seek to isolate and to contact their relatives. In addition, there are in the population resistance to the vaccination, because the distrust of the government in the Region.

The UN had not invited the armed groups in the Region on Friday, to hinder the fight against the highly contagious disease. According to information of Minister of health of the Oly Ilunga, there are always threats of attacks and kidnappings. Two helpers had already been killed.

mid-October, the Ebola epidemic was about to become the global health emergency is declared. The crisis Committee of the world health organization, WHO, but then decided against it. Under the control of the epidemic is not, therefore, but still. The head of the Committee, the Zurich-based specialist in infectious diseases Robert Steffen, said at the time: “We are optimistic that this outbreak can be brought in the foreseeable future under control.”

The Ebola Virus is one of the most dangerous pathogens in the world. It causes fever and often massive internal bleeding; the Transmission occurs through direct contact with body fluids of an Infected. Often the disease is fatal. In the case of an epidemic in the years 2014 and 2015 have died in West Africa, more than 11,000 people. In the Democratic Republic of the Congo it is already the tenth outbreak, since the disease was discovered in the country in 1976 for the first time.