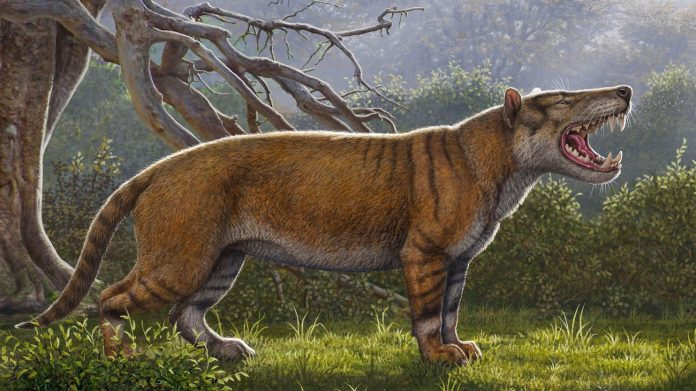 researchers at the University of Ohio in the USA have discovered in the total re-evaluation of older findings from Kenya, one of the largest meat-eating mammals. The lion-like animal was likely to have been up to 1,500 kilograms, and “may be larger than a polar bear,” reported the Team led by Matthew Borths. Therefore, it was the dominant carnivores in the area and could probably hunt animals, the present-day elephants and hippos resemble. It lived around 23 million years ago in Eurasia, North America and Parts of Africa and the Arab world.

The new species was called Simbakubwa kutokaafrika, the scientists write in the Journal of Vertebrate Paleontology. Simba means in East Africa language widely used Swahili for “lion”, kubwa means “big” and kutokaafrika “out of Africa”.

The animal was, therefore, on the basis of an incomplete mandible, as well as by means of teeth and bone fragments are identified. These have already been excavated decades ago, in the Fund Meswa point Bridge in the West of Kenya. The animal was, according to the researchers, not related to today’s cats, but belongs to an extinct mammalian group.

Long as one had believed that the Fund belonged to a smaller species. The new investigations at the Nairobi national Museum, showed according to the researchers, however, that it is a new species. The teeth and bone fragments were, therefore, probably of a young male animal. The age was determined, that the teeth are very little worn.

The scientists believe that the size of the Tiers had to do with the environment. Changes in nature during this time led to larger herbivores could live on the earth. This could, in turn, by larger meat-eaters hunted. Large carnivores, such as Simbakubwa kutokaafrika existed, therefore, for several millions of years.