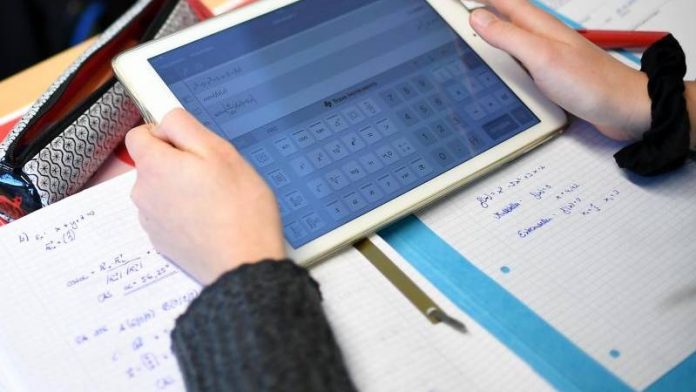 The planned digitisation of Germany’s schools have taken a more Central hurdle. The Bundestag voted by a Two-thirds majority in favour of a corresponding amendment to the basic law. This year, the first money to flow from the Federal to States and municipalities.

The law received in roll call final vote, a majority of 574 of 648 votes cast. With no 74 deputies voted. Thus, the necessary Two-thirds was achieved in majority as expected. Previously, all the groups had voted in addition to the AfD. The basis of an agreement in the mediation Committee of the Bundesrat and the Bundestag on the Wednesday evening. The chamber of States should be in mid-March the green light.

Then five billion euros, the Federal government can flow for the equipment of the schools with digital devices and learning programs, two billion for new social housing and a billion for the rail transport. The basic change in the law to allow the Covenant, or make it easier to attack the countries in those areas in which you are responsible, under the arms. The AfD had failed with a request that the vote to depose.

The first Federal funds will flow into this year, as a spokeswoman for the Federal Department of education announced. The head of the conference of Ministers of education, the state of Hesse Minister Alexander Lorz (CDU), said: “The digital Pact school must now come into the Running for the schools of planning have security and we can give the digitisation in our schools the necessary momentum.”

According to the amendment to the basic law of the already negotiated digital Pact must be signed. This is the pre-negotiated agreement of the Federation and the länder on the Federal assistance of five billion euros. Thereafter, the school Board, such municipalities, and, in the case of the countries, applications for funding, it said.

In Baden-Württemberg, for example, with the Federal funds, primarily Wi-Fi at the schools, such as the country education announced the Ministry. In purely mathematical terms, the country could benefit with 142.000 euros per school or 433 euros per child. From the Rhineland-Palatinate, it was said, would be involved, parents and student representatives.

Use of the medium, for example, for display devices such as Whiteboards, for personnel costs for system administrators and for end devices. Up to one of the five billion will also be used in Laptops, Notebooks and Tablets – every single school should be able to get up to 25,000 euros.

Lorz not pointed out that the countries start at the school with the digitisation of zero. “The Minister of culture of the countries have already been on the way to meet the challenge of digital change, which are General and vocational schools faced.”