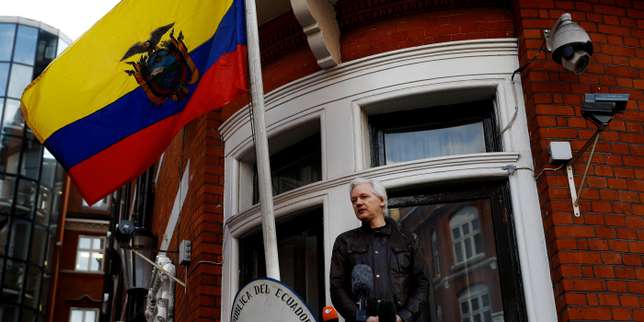 He accuses the government of Ecuador of violating his fundamental rights and freedom “. The Australian Julian Assange, a refugee for six years in the embassy of Ecuador in London, has launched a legal action against the government of Quito to protest against his living conditions, has announced WikiLeaks Friday, October 19.

According to the press release of the non-governmental organization specializing in information leakage, the action will be launched by the ex-judge Baltasar Garzon, who is leading the defence of the co-founder of WiliLeaks. This last, 47 years of age, had found asylum in June 2012 in the embassy to escape extradition to Sweden, where he was wanted for charges of rape and sexual assault that he denies. The procedure has since been closed.

“This is an inhuman situation”

WikiLeaks stresses that this action comes seven months after Ecuador threatened to withdraw his protection, and has cut off its access to the outside world, including by refusing to allow journalists and the organisations for the defence of human rights and by jamming its communications to prevent access to the internet and phone calls “. Quito has since partially restored these communications.

Baltasar Garzon has held on Thursday a press conference in Ambato, Ecuador :

” This is not a convenient location, it is an inhuman situation because the solution is slow, then it should have already been handled by the States involved, which are Ecuador, the United States and Great Britain. “

Quito was announced in march, having cut systems of communication with the outside of the Australian, stating that he had failed in his ” written undertaking not to publish messages constituting an interference in the relationship (Ecuador) with other States.” This decision came after a series of tweets posted by Mr Assange in which he denounced in particular the arrest of the ex-president and catalan independence leader Carles Puigdemont, or the sanctions imposed by London against Russia in the case Skripal.

If the prosecution in Sweden against Assange were dropped in may 2017, a british court has reiterated in mid-February with his refusal to lift his arrest warrant on the grounds that it had not met in 2012, the conditions of his bail. The Australian fears, if he leaves the embassy, to be arrested and extradited and tried in the United States for the publication by WikiLeaks in 2010, many secret military and diplomatic documents, u.s.