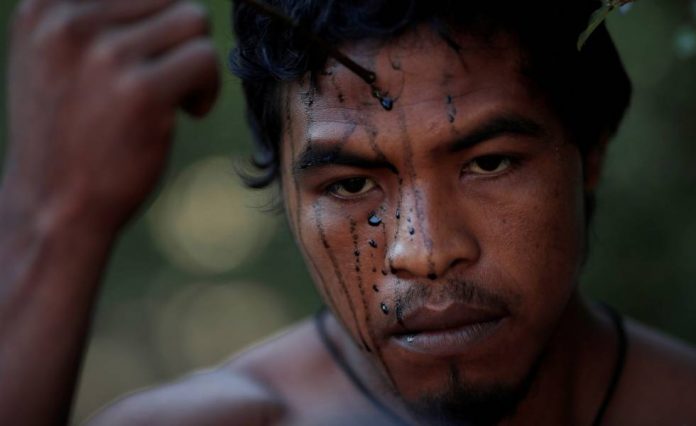 Paulo Paulino Guajajara, known as Lobo Mau (bad Wolf), was shot and killed Friday afternoon on the Indigenous Land Arariboia, in the State of Maranhão, northeast of Brazil. Pauline was one of the so-called guardians of the forest, commissioned to monitor and report on the illegal invasions of the jungle, one of the most dangerous in the country. It was at that time with Laércio Guajajara indigenous leader of the region, who managed to escape the attack, but was injured. Laércio was shot twice in the arm and in the back, and others that hit him glancing. The past year, died 20 indigenous leaders.

“Both of them were returning from a day of hunting when they met with an ambush, a few armed men, probably hunters or loggers”, says Carlos Travassos, funai who works for the Guajajara, and it was the best friend of Paulo Paulino. Travassos spoke this Saturday with Laércio, who was hospitalized, though his life is not in danger. The leader of Guajajara told him the details of the attack, which has also moved to the local authorities. “They were a little more of a day hunting to feed their families. Returned by a pond to catch water and when it filled up a bottle, heard a noise and were surprised by armed men,” says Travassos.

The Guajajara living in the jungle Arariboia, with 413.000 acres and is home to 14,000 indigenous of this village. There is also hide 60 uncontacted indians of the village of Awá Guajá. Are continually threatened by invasions, and to Pauline as he had been threatened with death. His murder caused a shock, and immediate between the entities of support for the environment. Paulo, a young man who dedicated his life to the preservation of the forest and their village, was married and had a son. “The father of Pauline is the greatest singer of traditional Guajajara, a spiritual leader,” says Travassos.

indigenous Maps of the Amazon 3D Amazon check pulses to the power to protect and care for the environment Bolsonaro: “it Is a fallacy to say that the Amazon is the heritage of the humanity”

The guardian had already begun to negotiate its entry into a statewide program of human rights to strengthen its security. “Unfortunately, this has not given time,” said Sônia Guajajara, coordinator of the Articulation of Indigenous Peoples of Brazil, and a member of the same village of Paulo Paulino. Ironically, Sônia is now located in Europe to participate in a meeting with leaders and members of the european parliament to denounce the deaths of indigenous people in Brazil, under the campaign “Indigenous Blood, not a drop more”. “There is a genocide institutionalized. There is a license to kill, to arm the people, even more so when the crimes go unpunished, and when the highest authority of the country says now that you do not mark the land, that seeks to exploit them, a speech that encourages opposition to indigenous peoples”, points Sônia, in reference to the speech of the president Jair Bolsonaro, clearly favorable to economic development on indigenous lands. “The invaders feel legitimized by the president”, he concludes.

however, the Justice minister, Sergio Moro, has announced that the murder will be investigated. “The Federal Police will investigate the murder of the indigenous leader, Paulo Paulino Guajajara in the indigenous territory of Arariboia, in [the state of] Maranhão. We will spare No efforts to bring the perpetrators of this serious crime to justice,” he said on Twitter. Despite the commitment, the support groups to indigenous peoples see the announcement of the minister with suspicion. “The terror that grows in these communities is the result of policies of the same Government that now says that it will do justice in this case. It is a contradiction that is huge,” says Christian Poirier, Amazon Watch, which follows several cases of vulnerability in indigenous communities in Brazil. In 2017, the 57 leaders were killed, and 20 others in the past year.

Arariboia has suffered attacks in the past few years. In 2018, was murdered the cacique Jorginho Guajajara, a crime which, as everyone in the that there is an environmental leader in Brazil, has not been elucidated. According to the police, Jorginho drowned alone, we hypothesized that the guajajara categorically deny. In 2015, the village also saw how incendiaba half of their forest, in fires considered suspicious. “This year we are also faced pockets of fire,” says Sônia Guajajara. The death of Paulino increases the tragedy.