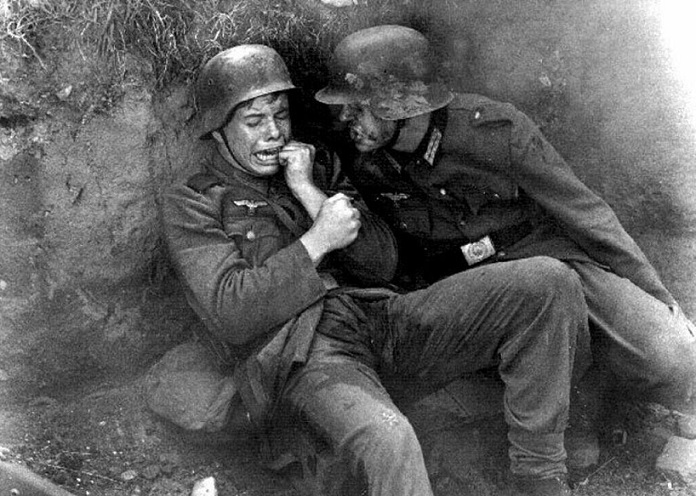 Many of the techniques of psychological impact on the enemy in the great Patriotic war were used by both warring parties. However, the Red Army sometimes used such methods of intimidation of the enemy, which the Germans never could have come.

First, the statistics of death, then tango

Like the Nazis, the Soviet troops often used fear-mongering loudspeakers or hand horns. Throughout the war, on the fronts of the red Army had about 500 of these “agitators”, they are broadcast to a distance of three kilometers. In particular, in the battle of Stalingrad to the position of the Nazis on our side could be heard classical music or pre-war German hits, which were to remind the soldiers and officers of the enemy of the good peaceful time without shooting and death. This musical idyll is interspersed with “news”: the Nazis were informed of the defeats of their armies on a particular front, reporting at the same time, how many soldiers and officers of the Wehrmacht were killed and wounded.

Surviving in the hell of Stalingrad, the Germans remembered that most of the horror they were putting the countdown metronome: after seven hits, a sinister voice 20 times repeated that in every seven-second period of time at the front killed one of Hitler’s military. And then red agitators included some nostalgic dance composition. Especially in Stalingrad suffered from the psychological impact on the Soviet side the already demoralized soldiers surrounded the army of Friedrich Paulus.

Armor is strong, and… tractors our fast

Special tricks in terms of the psychological impact on the enemy was used by the red Army during offensives. For example, when defended Odessa and there was an urgent need in the tanks, the engineer of the Odessa machine-building plant up to sheathe armor … crawler tractors. A group of such “tanks” equipped with light weapons and one of the September nights, turning on their lights and siren, started in full swing on the position of the Romanians. The enemy panicked. Upgraded tractors was given the nickname “NO-1” (“To fear”). Subsequently, the unit “supercar” was increased to 55 units.

Some types of mental attacks of the red army was not just shocked the enemy, and sometimes even drove the Nazis nuts. In November 1941 in the battle of Moscow, the attack went “Mongol” cavalry. She was flying lava, one stream after another. German artillery shot the riders at close range, but the regiment did not stop the offensive. From the point of view of strategy, such actions did not make sense. But the Germans once again realized that the Russian capable of any sacrifice for the sake of victory.

Another proof is similar to the heroism of our soldiers – the fierce battle for Sinyavino heights (1941-1944), in the Leningrad region. Thousands of lives of Soviet soldiers had paid for the capture of the strategically important strong point of defence of the German troops. The remains of a considerable part of the victims, if not most, are stacked in multiple layers, and to this day lie in Sinyavino swamps unburied.

the Nazi gunners had lost his mind, killing the assault of Soviet soldiers, lined up in a row, so there were many of them and so much of their tenacity. About those terrible attacks memories in the memoirs of survivors of the Germans. However, this is the case when receiving the “take no skill, and a number” can hardly be attributed to the varieties of intentional intimidation of the enemy – just the command sent soldiers into battle as cannon fodder.

Soviet agitators and the Germans during the war used such a demoralizing factor as leaflets, Newspapers and other printed products, throw-on position of the Nazis. It was developed a special Bureau of political-military propaganda. The Nazis and their allies were induced to surrender in captured. Especially effective is the effect on the allies – the Dutch, the Finns and the Spanish Blue division of the SS, who had a low fighting qualities, according to the Germans.

the Most famous of captive of Nazi field Marshal Friedrich Paulus. Besides him, during the war in Soviet captivity were three fascist General, Grand Admiral, two brigadeführer, obergruppenführer, and gruppenführer of the SS sturmbannführer. Captured, Lieutenant General Vinzenz müller and other high-ranking military officers have persuaded to surrender to the red Army, tens of thousands of soldiers and officers of the Wehrmacht.