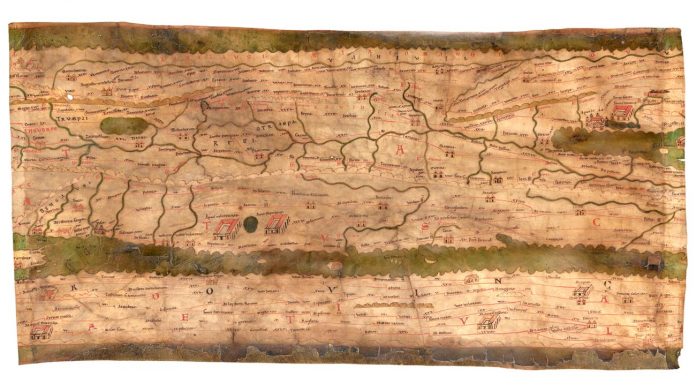 to the North of the Danube, the world is soon to end. Central Europe consists of no more than a narrow Band of the Mediterranean sea, as well, North Africa is still just a thin line: in ancient times the known world seems oddly distorted, if it occurs with the modern land maps are accustomed to look at the Tabula Peutingeriana. Numerous villages and cities of Europe owe the first written mention of it – but even more toponyms that are mentioned on the road map, work scientists are still working to make their situation.

The medieval copy of the single illustrated map of the world, which is handed down from ancient times, extends over a length of 6.7 meters and is only 34 inches tall. The road from Vindobona, so Vienna, to Claudium Virunum in the vicinity of the present-day Klagenfurt, acts as a stone’s throw, while the track to the Celtic Ivavo, is the name of Salzburg, seems to be at least ten times as long. How should we find out?

Codex Vindobonensis 324 is the Name of the unusual world map in the Austrian national library, in whose possession it has since 1738. There is now to be seen in the framework of the jubilee exhibition, one of the eleven parts of the former roll of Parchment in the Original: a rarity, the precious manuscript, which belongs since 2007 to the Unesco world document heritage, has carried out in the course of the centuries strong damage.

This may not be related to the Tabula Peutingeriana disappeared once without a trace and on nebulose kind of showed up again. They must be around the year 1200 as a copy of an ancient map. However, a first track of the tabs, there are only 300 years later. The German Humanist Conrad Celtis had discovered, in his own words “somewhere in a library”. Celtis it passed in 1507 to his friend Konrad Peutinger, after which it was named. After Peutingers death, she was suddenly missing. Only in 1714, she was found again and ended up in the collection of Prince Eugene of Savoy, who buys after the death of Emperor Karl VI. and in the Vienna court library was incorporated.

Exciting the puzzle is for the science behind their formation history. What are the ancient world map was the model, who has made the copy in the end? Which information – i.e. which geographical Knowledge, and what view of the world – in fact correspond to those of the Hellenistic era, which of the Roman Empire, and what was added by the copyists, or changed?

About the source of the Tabula, there are only speculations, as well as on the template. A similar cartographic representation of ancient times is simply not known. Nevertheless, it must have a Ur-tabs is given, which is probably formed between 200 and 330 after Christ and over the centuries, was gradually modified.

In the center of the Oikumene, of the once inhabited applicable world between Iberia and India, is on the Tabula Peutingeriana Rome, represented by a Vignette of the goddess of the city in the middle. In addition to the center of the Roman Empire and the cities of Constantinople and Antioch around 3,600 locations, cities, as well as raster – and pilgrimage sites, buildings or 38 baths and spas. Oceans, rivers, forests and mountains are characterized by iconographic symbols. The most important Element of the total 200,000 km long, in red-held road connections to form but. From stage to stage, the distance is given, adapted to the in each case in the area of conventional units of measurement such as the Roman mile, the Persian Paradise, or the round-the Laconic Gulf used the stadium.

This article dates back to the TIME no 47/2018. Here you can read the entire issue.

What’s missing today, is the first section of the map, Instead of eleven, the Tabula must have passed once, consisting of twelve Parts. The missing arch on the left side, probably the Atlantic ocean, parts of the Iberian Peninsula, West Africa and contained perhaps introductory information.

For well over 300 years, the Tabula Peutingeriana gives the researchers the puzzles – which is less the fact that its signatories would have created an impractical monster. Actually, you can even be quite easy to read – if they are regarded as a modern map. Rather, they work as those network plans that are today at the subways: You can see a route scheme, on which the traveller relevant stations are shown.

One of the eleven sections of the Tabula Peutingeriana is up to 29. To see November in the national library. 20. November held a lecture.