Home Breaking Driving bans in Germany: In Stuttgart, Diesel not allowed here since the... 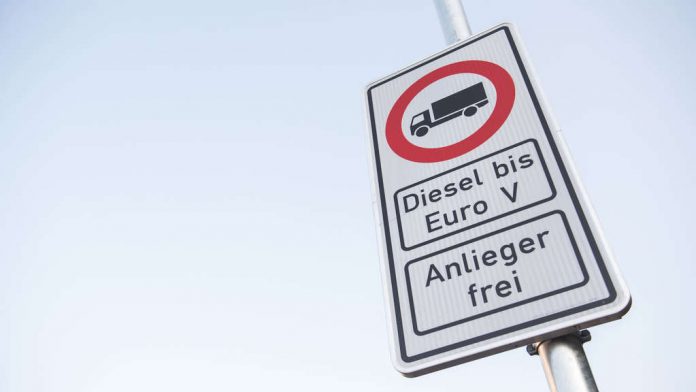 The list of cities and towns with driving bans for Diesel and the old diesel is getting longer and longer. The latest members of Cologne and Bonn. The Cologne administrative court imposed for the two cities, a ban on older Diesel. From April 2019 to certain streets or zones are not allowed to drive. But where bans are already in force and where threatening to what? We provide you with an Overview.

a driving ban in Hamburg

The first driving ban in Germany is in Hamburg, Germany. There are since 1. June 2018, the two sections of road in the district of Altona-North for all diesel cars not meeting the Euro 6 emissions standard, locked.

a 580-metre-long stretch on the Max-Brauer-Allee is Affected. In addition, a driving ban for Trucks to 1.6 kilometers of the stresemannstraße. The road is an important East-West connection in Hamburg is especially heavy traffic on the road.

The driving bans are valid however, not for the residents of the Max-Brauer-Allee and Stresemann street. In addition, customers of the adjacent shops and offices with older Diesel vehicles are allowed to drive in the prohibition zone. Also garbage trucks except for delivery vehicles, buses and Taxis.

also read: What is the emissions standard for my Diesel? So you figure it out.

threaten in Hamburg, Who is traveling in Hamburg, despite a ban the roads affected, must reckon with a warning or fine of 20 Euro for a Car and € 75 for the Truck. Checks by the police in the samples and the controls in the vehicle papers.

ban on driving in Stuttgart, Germany

In Stuttgart, Germany effective 1. January 2019, a driving ban for diesel vehicles with emission standards Euro 1 to 4. In contrast to Hamburg, the entire city is affected. The air quality should not be improved, there is the possibility that Diesel no longer are allowed to drive with Euro 5 by 2023.

Also interesting: These European cities have locked the Diesel already.

There are, however, exceptions: those Who Diesel upgrade its Euro 5 for two years of possible driving bans will not be affected. For residents of a transitional period of until 1. April 2019 to apply. Also of the delivery traffic, artisans and people in the layer of service, care services and micro-enterprises are excluded. A violation of driving 80 euros

a driving ban in Frankfurt

February 2019 Frankfurt has to introduce a driving ban for Diesel. The decision of the administrative court of Wiesbaden. Whether the prohibition relates to the whole city, or individual areas, has not yet been clarified. But the reality is that by driving diesel vehicles with the Euro 4 exhaust gas standard and the older prohibition are affected, as well as gasoline of the standard Euro 1 and 2. Starting in September 2019, and Euro-5 Diesel to drop the prohibition on driving.

a driving ban in Berlin

Berlin motorists will have to expect a driving ban. No later than June 2019 Diesel vehicles could face up to Euro 5 emission standard restrictions in the city centre. Affected are eleven sections on the eight roads Leipziger Straße, Reinhard street, Frederick street, bridge street, Kapweg, Alt-Moabit, power street and Leonora street. An additional 120 road sections could be added.

Learn here what will change in 2019 for motorists.

recently, the administrative court in Mainz, Germany, has asked the city, driving bans as a measure to improve the air until April 2019. Does not improve the air in the first six months of next year, to be introduced from September 2019 driving bans in Mainz. The extent is not yet known.

a driving ban in Aachen

, it Should not create the city of Aachen until the end of the year, to improve the air in the place, effective from 1. January 2019, a driving ban for diesel vehicles. Which vehicles and roads are affected, is not yet known.

a driving ban in Cologne and Bonn, Germany

In November, the administrative court has led to Cologne for the two cities of Cologne and Bonn bans starting in April 2019. In Cologne, then Diesel with the 4 exhaust gas emissions standard are no longer allowed to drive on certain zones in the city. Starting in September 2019, the ban will be extended to Euro-5 Diesel. The driving ban in Bonn is limited to only two busy roads.

Also of interest: hydrogen cars not electric at all in the future?