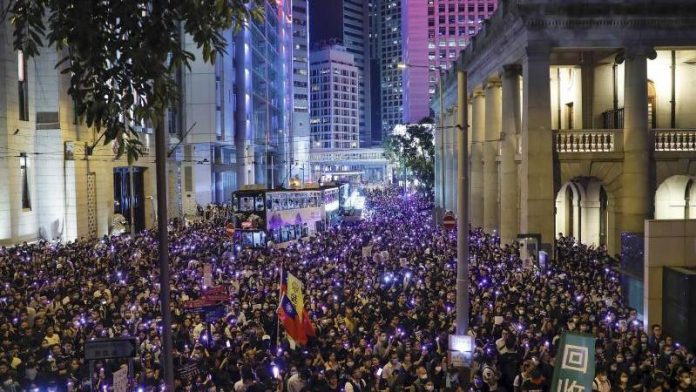 Hong Kong police has forbidden a for Saturday’s planned mass protest. Such a request by the organizers of the Protest Alliance, the Civil Human Rights Front was rejected, as the Hong Kong newspaper “South China Morning Post” reported on Thursday.

The group, which had brought in the past few weeks, several times, over a Million people on the road, wanted to stop on Saturday was originally a rally and a March to the liaison office of the Chinese government.

prohibitions of demonstrations had taken place during the for more than two and a half months of ongoing protests, again and again. However, many of the protesters were still on the road. According to Hong Kong media reports, it is the first Time that a March and an Assembly were prohibited. The police justified its decision that new riots were feared.

Since 9. June in the financial metropolis again and again to demonstrations which often ended with clashes between a small part of the protesters and the police. In the case of the protest movement, it’s fear of a growing influence of the Chinese government on Hong Kong. The protesters are calling for an independent investigation into the police violence at the protests. On Wednesday, thousands of demonstrators took to the streets accused the police of sexual Assaults on protesters.

By the prohibition of the government to show that it was not ready for the Public to listen to, cited the “South China Morning Post,” co-organizer Jimmy Sham, who wanted to insert, therefore, appeal against the decision. Sham, the newspaper reported, was on Thursday attacked in a Restaurant by two masked men with Baseball bats. While he bore no injuries, had to be brought a friend to the hospital.

the garrison of The Chinese people’s liberation army in Hong Kong, has completed, according to Reports in state media on Wednesday night with their annual “troop rotation”. The state news Agency Xinhua showed pictures of armored vehicles, which crossed into the darkness of the border in the Chinese special administrative region. Therefore, it was since the return of the former crown colony in 1997, the 22. Time the Chinese troops in Hong Kong is rotated. In neighbouring Macau, therefore, units were replaced.

Against the Backdrop of the continuing protests in the city are Chinese troops currently under close observation. In the past weeks had become loud, that Beijing could intervene militarily in the conflict.

stationed in Hong Kong, units of the people’s liberation army, however, is no secret. After the departure of the British in 1997, China’s military moved in officially with its own garrison in the city. Its strength is currently estimated to be 5000 to 7000 soldiers.

Beijing had built up, especially with units of the armed people’s police, which were stationed in the southern Chinese city of Shenzhen in close proximity to the border, a threat. State media spoke of the “Exercises”, which were, however, directly related to the protests in Hong Kong in connection. The presence of the units was “a significant warning” to the rioters, wrote the state-run newspaper Global Times.

Reuters topics in this article Hong Kong police mass protest South China Morning Post, the rally in Beijing, Jimmy Sham riot New policy +++ Trump-Ticker +++ Pence instead of Trump Trump’s journey says to Poland, due to hurricane “Dorian” from AFP display star travel worlds, American Football live – journey to the NFL in the USA Sayn-Wittgenstein To the right for the AfD: had to these politicians, the party already involuntarily leave government change in Italy, Salvini is (for the moment) out why Conte is now a masterpiece DPA that the UK must bring a No could-Deal-Brexit but CNN be prevented-Interview of the Moderator is stunned: Trump’s spokeswoman claimed that the President had never Defended a lie, By Marc Drewello outrage over Johnson’s plans for “democracy” – hundreds in London, on the road press force, house of Commons, “The head of government has been a military coup against the Parliament. So democracies” DPA analysis of voting in October, those Who want to, who will it be? The candidate for the SPD party chair of the Overview study on the culture of welcome, German immigration to help the economy – and yet you want less of DPA Brexit-armed “outrage to the Constitution”: the wrath of Boris Johnson’s parliamentary closure grows 40 new Levels of Mahjong – free to play! Play the Landtag elections in Saxony and Brandenburg in Triumph to the choice of the power struggle in the AfD is urns dramatically AFP report in the “Washington Post” wall tighten each price: Trump should have allowed subordinates to break laws, accusations of campaign spying, Austria is double: Which party talks for now, “our language”? PD and Five stars in New government in Italy – Conte, will the Prime Minister remain the DPA Vice-President of the regional Parliament Feminist, young and black: Aminata Touré is a Shootigstar of the Green Which party suits me? The Wahl-O-Mat to the Landtag elections in Saxony and Brandenburg, and his Alternative forced break for a Parliament No-Deal-Brexit is getting closer – this trumps the Queen (theoretically) in Front of “Brexit” Johnson Parliament in forced break process in New York send “I hope that he will tell the truth” – Alleged Epstein victim confirmed the allegations against Prince Andrew By Steven Montero’s analysis of the G7 conference Trumps most bizarre statements following the summit meeting in Biarritz By Marc Drewello