Home Breaking How many died soldiers of the red Army in attempts of breaking... 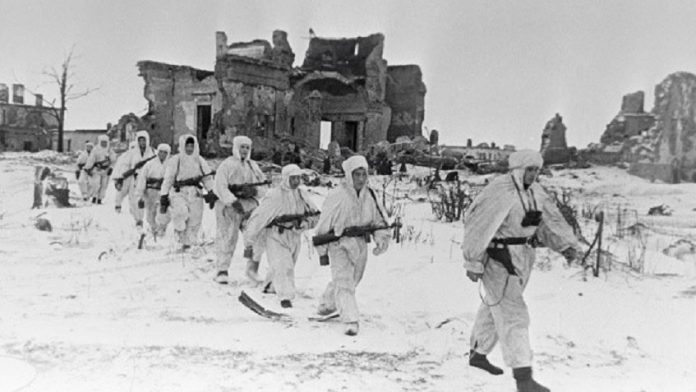 After September 8, 1941 German and Finnish forces had blocked all land routes to Leningrad, the Soviet command has repeatedly attempted to break through the ring and to supply the besieged city.

Even before the German closed the encirclement around Leningrad, the Soviet Stavka had set the goal of 54-th separate army to take the offensive South of lake Ladoga in the direction of the station mga and restore railway communication of Leningrad with the mainland. While the army concentrated, the Germans managed to seize the town. The task of the army now was to break the blockade of Leningrad. On 10 September began the offensive. In the first two days part of the 54th army has achieved some tactical successes, but on 12 September the Germans delivered a heavy counter-attacks and pushed her back almost to their original positions.
In the following days, 54 army, impelled by the Bet and commander of the Leningrad front G. K. Zhukov, repeatedly renewed the attack. Several times changed the direction of the main attack (in Shlisselburg, Sinyavino then). But significant progress was not. 24 September, the Rate laid on the commander of the 54th army of Marshal G. I. Kulik personally responsible for the success of the operation. But on 26 September, the operation had to stop. Kulik was dismissed from office.
the Commander of the Leningrad front, Zhukov believed that may not be sufficient forces to meet Kulik, as he feared to weaken the force of the front, directly defended Leningrad. However, he tried limited forces to break through the German defense. Part of the troops of the Neva operational group (NOG) failed with heavy losses to capture and hold a small bridgehead on the Bank of the Neva river in the Moscow district of Dubrovka, known later as “Nevsky Pyatachok”.
In October 1941, was a new attempt to break the blockade of Leningrad. It was conducted in essentially the same compounds in the same directions. Despite the fact that 16 October, the Germans East of the Volkhov river went on the offensive at Tikhvin, October 20, Soviet troops began the Second Sinyavinskaya operation in 1941. Persistent attack, not led to notable successes, continued here: on the site of the 54th army – until November 9, on a plot of 55-th army of the Leningrad front until the end of November, in the area of LEGS – until the end of December. Particularly heavy attacks were made with the “Nevsky patch”, where for 43 days was held on 79 attacks.
Total losses of Soviet troops in all these battles amounted to about 100 thousand people, including about 40 thousand killed. All the 18th the German army had lost during that time killed about 13 thousand, counting the Tikhvin operation and the fighting on the approaches to Leningrad (that is in the area of MGI and Sinyavino – hardly more than half that number).

In December 1941, the troops of the Volkhov front eliminated the herniation of the Germans at Tikhvin, and drove the enemy back over the river Volkhov. In January 1942, Soviet troops launched a General offensive on many fronts. The task at Leningrad has been supplied by the environment and defeat the 18-th German army South of Leningrad. Troops of the Leningrad and Volkhov fronts were to strike in converging directions toward each other.
on 7 January the army of the Volkhov front under the command of General of the army K. A. Meretskov launched an offensive, but only on 13 January, after repeated attempts, they managed to cross the Volkhov river North of Novgorod, near the Meat Bora. The breakthrough was introduced by the 2nd shock army, which in January and February drove in the enemy’s defenses, the wedge depth of 60 km. the Advanced part of the army came to Lyuban’. They had to pass to the junction with the troops of the Leningrad front the same distance.
But the success of the Soviet troops was localized actions of the Germans. The neighbors of the 2nd shock army have achieved success in their fields. Also unable to move in a counter-offensive of the Leningrad front. The Germans held the road junctions. The corridor linking the 2nd shock army from other parts of the front, remained very narrow. At the end of March the Germans managed to cut. All attempts by Soviet troops to restore the land connection with the 2nd shock army did not bring success. In July 1942, she died surrounded by.
in the Summer of 1942, the Soviet command made in the area of MHI and Sinjajevina, where the onset of the autumn of 1941, operation with limited purpose – to break through the corridor to link with Leningrad. The offensive of the Leningrad front commanded by General of the army L. A. Govorov began on August 19, but did not lead to success. However, it had a distracting character. August 27, went on the offensive the troops of the Volkhov front. They managed to pass half the distance separating them from Leningrad, but at the end of September, the Germans counterattacked in the base projection wedged Soviet troops and by October 10 the restored original position.
Soviet troops in the course of the operation lost from 130 to 160 thousand soldiers and officers, the Germans – to 35 thousand. It is believed, however, that sinyavinskaya operation 1942 thwarted the German operation with the aim of mastering Leningrad.

a Joint operation by the Leningrad and Volkhov fronts “spark” (12-30 January 1943), coordinated by G. K. Zhukov (received in the course of it the title of Marshal), led January 18, to break the narrow (8 km) of the corridor connecting Leningrad with the mainland. All attempts to expand were not successful. This operation is discussed in detail in the literature.
From 22 July to 22 August 1943, Soviet troops launched an offensive Mginskaya, the purpose of which was to expand the corridor to communicate with the Leningrad and restore communication with him by rail. Lasted a month of the attack only led to a slight skleneny Soviet troops in the enemy’s defenses. Our total losses in this operation amounted to 80 thousand, German – 49 thousand.

initiated on 14 January 1944 in Leningrad-Novgorod offensive in the Leningrad and Volkhov fronts led to the defeat of the 18-th German army and the final lifting of the siege of Leningrad. The enemy was driven back 200-250 km 27 January 1944 is the day of liberation of Leningrad lasted 900 days of the siege.
Thus, during 1941-1944, Soviet troops launched a total of seven offensive operations on the scale of the front and associations fronts (of which only two were successful) with the aim to lift the siege of Leningrad. This indicates that the liberation of the city on the Neva has consistently been one of the main strategic tasks of the Soviet command, and everything was done that was in his power.

Recommended statesalaska… Share: Comments Comments on the article “How many killed soldiers of the red Army in attempts of breaking the siege of Leningrad” Please log in to leave a comment! br>
Share on Tumblr