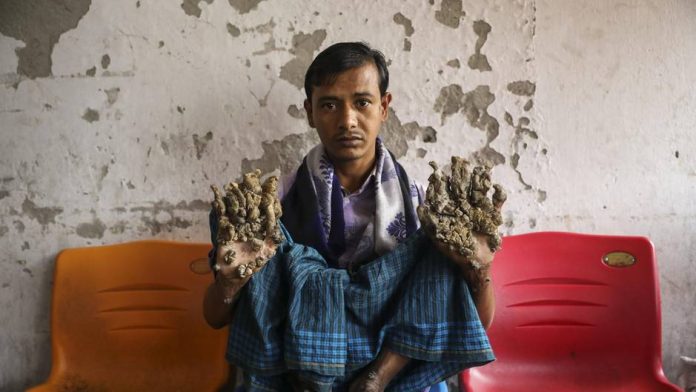 After more than 25 operations and a serious back-the case of Bangladesh “tree man wants to leave” his bark-like growths disfigured hands amputate. “I can’t stand the pain and can’t sleep at night. I asked the Doctors why, my hands are separated, which gives me at least a little relief,” said Abul Bajandar. His Doctors now want to advise on how to proceed.

Bajandar was 2016 in the world as “tree man” known. He suffers from an extremely rare skin disease, Epidermodysplasia verruciformis, causing severe bark-like growths. In a complex, but free treatment in the University clinic of Dhaka, the Doctors were freed at that time, the hands and feet of the former rickshaw driver, out of a total of five kilograms of excess tissue. After two years of treatment in the hospital he suffered a relapse and eventually escaped last may from the clinic.

The warts grew back to

Since January, he will be treated there again, after his condition dramatically deteriorated. Some of the warts on the hands were now several inches long, the condition of the feet, however, remained largely unchanged. The now 29-year-old father of a family would like to leave abroad to treat him the means to do so were missing.

The University clinic had treated in 2017, a then ten-year-old girl with a “tree man syndrome”. The Doctors managed to remove all of the growths on the face and the ears of the girl, but they grew back later even stronger than before. Then, the family completed the treatment and returned the girl back to her village.