Home Breaking Kurland boiler: where the Germans continued to fight after the fall of... 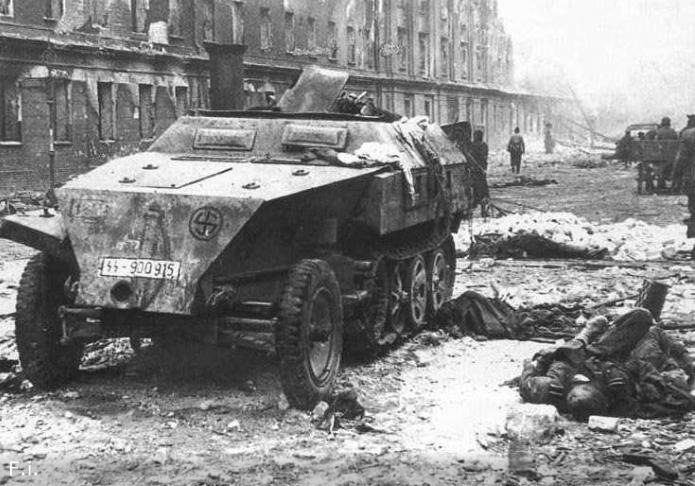 History 18/03/20 Courland cauldron: where the Germans continued to fight after the fall of the Berlin

may 7, 1945 was signed the preliminary Protocol of unconditional surrender of Nazi Germany. But, when the whole of Europe is at peace, in the Western part of Latvia – Kurland – still the shots were fired.

the Formation of boiler

German “Courland” the army, the last group of German troops in the USSR, was formed from the 16th and 18th German armies (army groups “North”). By 10 October 1944, they, and it was about 400 thousand people, was cut off from army group “Center” and is sandwiched between the two Soviet fronts of the Riga-Liepaja (200 km). From Germany they were separated by hundreds of kilometers.

After the capture by Soviet troops of Riga, Stavka set the task of 1st and 2nd Baltic fronts, to eliminate the “Courland” group. Two days later, on 18 October, the 1st Soviet shock army crossed the river Lielupe and captured the city of kemijärvi. But then could not move – were stopped by the Germans on the outskirts of the city of Tukums. The offensive was resumed only on October 27. Six field armies and one tank of the Soviet army tried to break through the German defense, with the aim to eliminate the Courland grouping, or at least dismember it. But, suffering heavy losses, October 31, 1944, he was forced to stop the offensive and instead of destroying the German army, to block it.

thus began the battle for Courland cauldron or, as he wrote in German propaganda sources, “the Kurzeme fortress”. When the whole world is already celebrating the victory, there still were bloody battles.

it is Worth noting that the Courland group was not completely blocked or cut off from Germany. The connection remained in the Baltic sea through the ports of Liepaja and Ventspils. That is, the group had constant access to food, ammunition and MediaCenter. Sea evacuated the wounded and, if desired, would be possible to transfer whole divisions on the territory of Germany.

Just before the surrender on a 200-kilometer front line troops were dispersed about 30 divisions of 10-15 thousand people each. One division accounted for about 6.6 km of the front.

It almost corresponds to the density of German troops during the battle for Berlin at Seelow heights. But it was battle for the German capital, and here behind the German soldiers were two minor seaport, and a few dozen hamlets and villages in wooded areas.

What is so zealously defended the former army group “North”? Even during the battle of Berlin, when in the Courland cauldron hope is was not for that, they continued to fight for the part of the Baltic territory. And in Berlin, meanwhile, was sent Maltsev did not know how to hold a weapon in his hands. As, for example, in the case of detachment of sailors of special purpose SS, consisting of sixteen cadets of Rostock.

“For the last piece of Russia”

According to the memoirs of Colonel General of the German army, Heinz Guderian, the battle for Courland cauldron wasn’t supposed to happen – the troops were ordered to withdraw from Latvia in the autumn of 1944. Planned retreat failed because of an error of the commander, Colonel General Ferdinand Schoerner, who “detained its armored forces in the center of Riga, Mitau instead of trying to get them to the area West of Siauliai, thereby enabling the enemy to make a breakthrough near the town of šiauliai. It finally cut off army group from the main grouping of troops.”

the defense Kurzeme (“Kurland boiler”) thirty divisions – an impressive number of soldiers, who formed the basis of the forces of the Eastern front. Meanwhile, Guderian repeatedly visited Adolf Hitler with a report on the withdrawal of troops from the boiler and transfer of divisions for the defense of Germany. As he recalled Guderian, in February 1945, Hitler almost beat him up for that presupply. He flatly refused to withdraw its troops from the Baltic States.

According to military historian Werner Haupt, Hitler did not expect his strength and held “the last piece of Russia.”

Soviet troops strongly contributed to this development, not giving the enemy “a moment’s peace”, taking the constant offensive, just to prevent the withdrawal of troops in Germany.

in the Spring of 1945, Hitler agreed to the transfer of troops, but it was too late. On removal of army group “Kurland” sea required at least three months. Thus, despite the partial lock and a message, Kurland was for the German troops boiler.

the Death sentence for the truth

the Spring of 1945 Hitler still hoped that the end of the war is that the Soviet troops would be able to recapture, and then the position in Kurland will be the springboard for a new attack on the Soviet Union. According to the memoirs of the German commander of the anti-calculation of Gottlob Biedermann, rejecting all reports of senior officers, Hitler found support in the General-Colonel Ferdinand Schoerner, who promised the impossible – to hold a front on the borders of 1944:

“Hitler once again began to build an idealistic plans for new attacks, using division and people who long ago defeated in the vastness of Russia.”

following his “promise”, the Schemer tried to deny, including myself, what is the situation for the German troops on the Eastern frontiers: he ordered the arrest referred to Biedermann, when he told him the real situation of Affairs on the front line. Last wrote:

“there were even rumors that any of the soldiers could be sentenced to death if to be heard about our hopeless situation in this “pot”.

the Official name of the trap was the “Courland bridgehead”. Until the truce on may 9, despite the hopeless state of the troops “Kurland” were instructed:”we hold position,” the delivery of which , de-facto, was only a matter of time.

the end of the Courland cauldron

Party bOEV for Kurland – Soviet pilot Ivan Vishnyakov in his memoirs told that may 8, 1945, the enemy still resisted, suffering heavy losses in manpower and technology: “the day destroyed more than a dozen enemy aircraft. The plans of the enemy for the evacuation of the troops completely collapsed”.
the night It happened. When everyone was asleep, climbed the firing of rifles and pistols. From the memoirs of Ivan Vishnyakov.

“he ran into the street, around hear jubilant cries of “Victory! Hurrah Nazi Germany has surrendered!”.

the next morning the long columns of German soldiers, officers and generals, to lay down arms and banners, were drawn to the rallying points, where they surrendered. So ended its existence Courland grouping, and stopped the Great Patriotic war.