Home Breaking Mehdi Huseyn-zade: why the Germans were afraid of “Soviet Terminator” and accused... 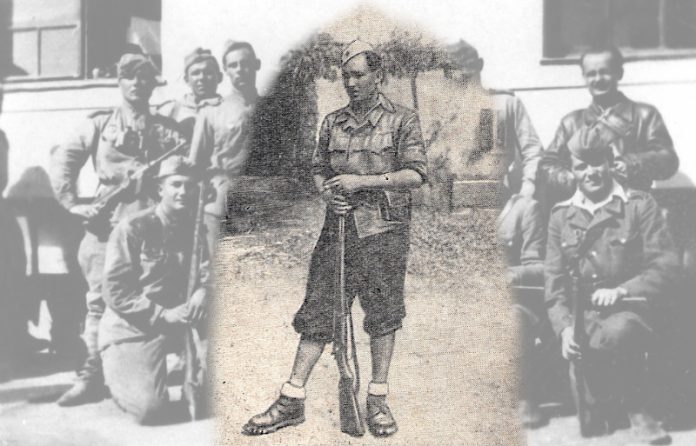 Heroes 29/01/20 Mehdi Huseyn-zade: why the Germans were afraid of “Soviet Terminator” and accused him of witchcraft

Slovenian writer and historian Cyril Zupanc in his book “Michael, intelligence officer and saboteur IX corps” called Mehdi Huseyn-zade, “the Russian Terminator”. And was probably far from the truth. Judge for yourself, who else compare this desperate Azerbaijanis, who fought in the red Army, escaped from German captivity, partisans in Yugoslavia and destroyed in his career of more than 1000 soldiers and officers?

From the red Army in the Azerbaijani Legion

According to information from the “Soviet military encyclopedia”, Mehdi Huseyn-zade, before the war lived in the suburbs of Baku and worked as an art teacher, in August 1941 he was drafted into the Red Army. After the Tbilisi school in 1942, he came to the front and immediately into an Inferno. As a commander of mortar platoon Mehdi took part in the battle of Stalingrad. But this experience for him was not the best. In August, he was severely wounded, he was captured by the Germans.

At that time the Wehrmacht was actively engaged in the formation of the collaborationist connections on a national basis. So, not really understanding and without requiring personal consent, Mehdi determined in the Azerbaijani Legion. The Muslim part is partially involved in the fighting on the Eastern front. Newbie still lack of well-crafted German propaganda tried to keep in the rear. Here and Gusein-zade both between Poland, Germany, Italy.

From captivity to the Yugoslav partisans

While in Northern Italy, Mehdi with a few friends founded an underground group, which was associated with the Yugoslav partisans and handed them the documents with the plans of the punitive expeditions of the Hitlerites. Caused by the Yugoslavs preemptive strike was a resounding slap to the Wehrmacht. Mehdi also with the assistance of the underground was able in 1944 to escape from captivity and joined the partisans in Slovenia.

Subsequently, Gusein-zade, under the name of Michael became part of the “Russian company” made up of former Soviet prisoners of war, and showed himself as a clever and courageous scout. A big plus was that he knew German. Handy and the habit of wearing the hated Nazi uniform. Using her, he first destroyed the German barracks, and later activated the explosives in the Nazi cinema. Several hundred killed and twice as many wounded — this was just the beginning “of the Soviet Terminator.”

it tells Harash Ali Madatov in the book “Azerbaijan in the great Patriotic war”, Mehdi was literally burning with desire for revenge for the injury and humiliation in captivity. So, every day when he didn’t kill the Nazis, believed lived in vain. His raids were built around one scenario: in the German tunic he entered the building that housed enemy soldiers, and, laying the explosives quickly removed.

On account of his several ambushes, which was destroyed by dozens of German trucks and derailed several trains. And one of the most desperate raids it is the murder of a Gestapo major N. Certner. Mehdi all in the same Nazi uniform just showed up to his office and shot on the spot. No less daring was the shooting from the machine gun training company located on the March without arms. Then Gusein-zade killed 20 Nazis.

shot Himself, in order not to surrender

of Course, the Germans have left sabotage activities partisan Mikhaylo without attention. His head was a reward of 400 thousand lire. But to her there was simply no one: all attempts to kill or take prisoner Mehdi ended in failure. Fellow guerrillas called him by a spell, and the Nazis considered even a sorcerer. Local and the same was seen in the dark moustache descendant of the legendary Vlad Dracula.

But death still caught a lucky dog. 2 November 1944, whenand he spent the night in one of the villages, there appeared suddenly a German patrol. To fight breaking out of the encirclement, Michael was severely wounded and, to avoid re-capture shot.

According to the gathered after the war, information, Mehdi Huseyn-zade posthumously in 1957 was awarded the title Hero of the Soviet Union. In fact, according to the documents, partisan Mikhaylo one destroyed manpower and equipment of the enemy more than the entire IX corps of the Yugoslav liberation army in which he served.

Featured articles Share: Comments Comments on the article “Mehdi Huseyn-zade: why the Germans were afraid of “Soviet Terminator” and accused him of witchcraft” Please log in to leave a comment! br>
Share on Tumblr