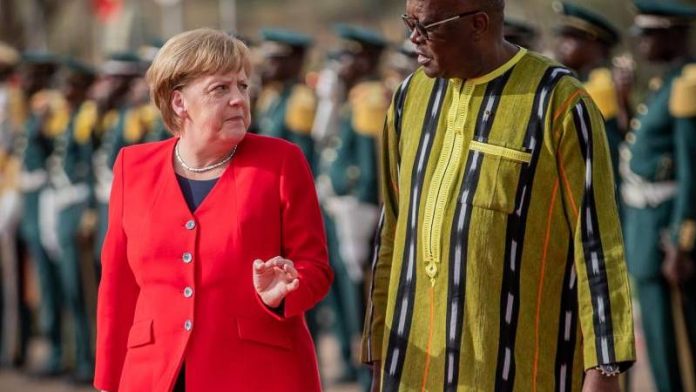 German Chancellor Angela Merkel (CDU) has said Burkina Faso and the countries of the regional organization of the G5 Sahel broad support in the fight against Islamist terrorism, and for more stability.

Burkina Faso stand in the face of a population growth of three percent, and the deteriorating security situation on the major challenges, said Merkel on Wednesday to kick off a three-day visit to West Africa after a meeting with President Roch Marc Kaboré in Ouagadougou, capital of Burkina Faso. To count the G5 group, Mali, Niger, Mauritania and Chad, in addition to Burkina Faso.

Merkel stressed after Meeting with Kaboré, civil unrest and the deterioration in the security situation have to do with the crisis in Libya and the development in Sudan. Kaboré demanded of Europe a common approach to the solution of the crisis in Libya. The Libyan issue should be resolved urgently, otherwise the threat will continue to worsen – for example, through the smuggling of weapons into the Region.

Germany’s stand at the cooperation in the security area on the side of Burkina Faso, stressed Angela Merkel. Weapons deliveries to the Chancellor, but refused. After she consulted with all five presidents of the regional organization of the G5 Sahel, such as the work of the group could be made more effective. This is especially the G5-Anti-terrorist-squad, with up to 5000 man the growing Islamist terrorism in the Region to fight. Experts believe that your approach is not very effective.

Merkel will visit this Thursday the German soldiers in Mali. At the end, the Chancellor will fly on Thursday evening to Niger, where you have to Friday to stay.

Germany will help Burkina Faso capacity development of the police and of the Gendarmerie and for their equipment for about 10 million euros, announced Merkel. The Federal government also offer counselling by the German armed forces to the extent of 7 to 10 million euros – the first negotiations are started. This also applies in view of the difficult situation in Parts of the country, with numerous school closures. In development cooperation, Germany will provide 5.5 million euros more than previously planned, in particular to cope with climate change, water management and improving soil quality.

Since the refugee crisis in 2015, Africa has become increasingly a focus of the foreign policy of Merkel. In the autumn of 2016 in the Region, visited at that time, in addition to Niger and Mali, also Ethiopia. Since then, there have been numerous other trips to Africa and the visits of African presidents with Merkel in Berlin. The location in the core-States in the Sahel has deteriorated, however. So in 2015 have been registered in Burkina Faso are still 4 attacks of Islamist terrorists, in 2018, there were already 160.

In the most recent development index of the United Nations is Mali ranked 182, Burkina Faso, on 183, and Niger, with 189 on the last rank. Terrorism is linked according to experts, in the countries with ethnic and social conflicts. Growth rates of between 5 and 6 percent are eaten by a population growth of between 3 and 4 percent. Niger has about 4 percent of the world’s highest population growth.

Germany is supporting the Sahel Region between 2017 and 2022, with 1.7 billion euros. A billion Euro is available for development aid, the Rest for the military, infrastructure, and training for civilian crisis prevention and humanitarian aid.

German soldiers are in Mali with the EU training mission EUTM and the UN peacekeeping force Minusma in use. The stabilization mission for the German armed forces, just behind Afghanistan, the second-largest deployment abroad; he is considered her the most dangerous. Merkel will visit this Thursday the Camp Castor in Gao, where the majority of the German Minusma-is stationed quota. The UN force of about 15,000 men strong, and Germany is nearly 850 soldiers. Minusma is to support ceasefire agreements, confidence-building measures and political dialogue.