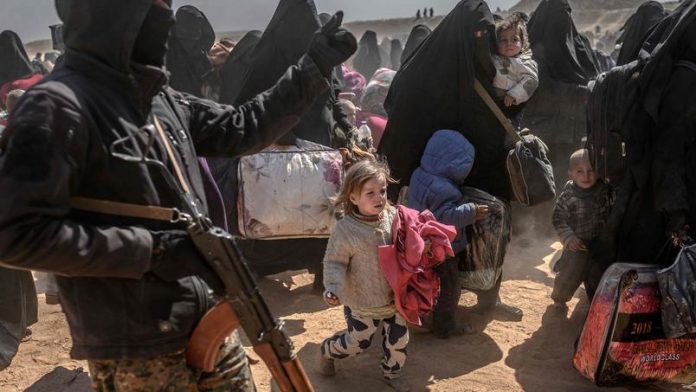 The decision was taken by the president of the Republic: five children of jihadists French have been repatriated from Syria on Friday at 13: 30. These orphans or unaccompanied minors under the age of 5 years were living in camps or in host families in the north-east of Syria. One of them, wounded, was in a poor state of health and may be hospitalized.

The operation of extraction of these children, complicated by poor weather on site has been accomplished with the help of the democratic Forces in syria (FDS) and of the political authorities of the autonomous region held by the Kurds in the north of Syria. It was carried out by military means, French. They returned on board of an aircraft of the French air force.

In the immediate future, the French authorities have concentrated their efforts, ” says a source at the Quai d’orsay, on “the children whose situations are the most dangerous and the most vulnerable”. The operation may be renewed in the near future if other children who lost their parents were in a similar situation. Three children of the jihadists had already been repatriated to Iraq, but this is the first time that the French authorities exfiltrent orphans of Syria. But it does not make a rule.

With the announcement of the american withdrawal from Syria and the imminent collapse of the last pockets of the “caliphate” of the islamic State, the thorny issue of the return of jihadists French arises the urgent need in several western capitals. Hundreds of them are in the hands of the Kurds in Syria, in addition to women, combatants or non-combatants, and children, that they came in with their parents or they are born on-site.

A headache for Paris

The case of the children of the jihadists is a headache for the european countries and especially for France. The society is divided between those who consider that it is necessary to refuse the return of these children to “war criminals” and those who consider themselves as “victims of war” could, if they had been abandoned to their fate in syria, to transform them into “time bombs”. Several families have filed a complaint before the Committee on the rights of the child united Nations on 28 February, in order to compel France to offer its protection to these minors. Emmanuel Macron defends for the moment – he said it again during his trip in Kenya – an approach “case by case”, a policy of “humanitarian” followed with “great care”.

If France agreed to repatriate the children isolated and without protection, its position vis-à-vis combatants, jihadists adults who have taken Daech in the Levant has not changed: “They must be judged on the territory where they are committed their crimes. It is a question of justice and security,” says a French official. And despite protests by several non-governmental organizations, the French doctrine, even if it still feels fragile, is not expected to evolve.

SEE ALSO – is it Necessary to repatriate the jihadists exfiltrés in Iraq?

Should we repatriate the jihadists exfiltrés in Iraq ? – Look on Figaro Live