Home Breaking “Pirates of the Edelweiss”: what German teenagers fought the Nazis 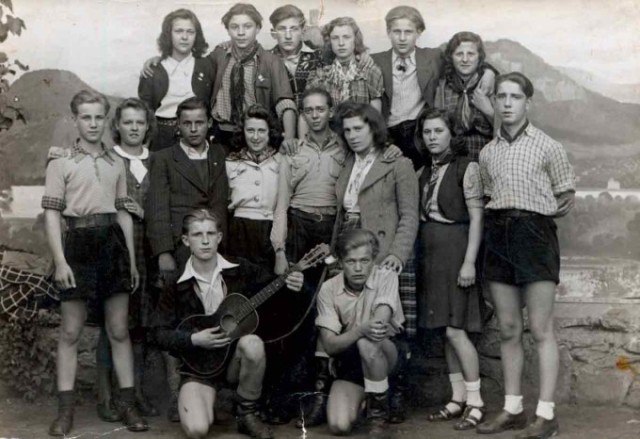 History 03/03/20 “pirates of the Edelweiss”: what German teenagers fought the Nazis

In the late NINETEENTH century under the influence of romanticism and the development of interest in nature in Germany was born, youth organization “Migratory bird”. As American scouts, the young Germans went Hiking, climbing, singing songs around the campfire. It is the “Migratory birds” became the basis of Nazi Hitler youth that joined more than 80% of German boys aged 10 to 18 years. Those who didn’t want to go marching off to the drums and praise Hitler, called themselves the “Edelweiss Pirates”.

In contrast to the “Kids swing”, the German counterpart of the Soviet “hipsters”, “pirates” was not limited to dancing and cultural protest against the existing in Nazi Germany about. The pirates liked to wear clothes in the style of American cowboys, to ride on nature, to travel and sing songs. On their own they wore badges with a picture of a flower, the Edelweiss, and to enroll in the Hitler youth left school at age 14. Thus, until they reach 18 years of military age in the “pirates” for four years did not apply to state custody.

the Pirates after the war began

With the outbreak of the Second world war, the movement became active and politicized. One German worker wrote that: “They are everywhere. More of them than Hitler. They know each other, they always stick together. There are so many that they beat patrols. They never take no for an answer.” For one night, “pirates” managed to paint the center of Cologne, with slogans such as: “Brown, like the shit brown this Cologne. Wake up finally!”, “Nazi heads will roll after the war!”, “Military high Command is lying”, “Medals for murder.”

the leadership of the Reich was called the “Edelweiss” parasites and social parasites, and to combat them, the authorities used the special patrol service of the Hitler youth, where he served athletes and strong men from wealthy families. Patrols withread the source of manpower for the SS. To punish the resistance 17 September 1940, was introduced a law, which was imposed disciplinary detention for a period of one month.

“pirates of the Edelweiss” after 1944

After the allies landed in Normandy German youth was attracted for the construction of defensive boundaries. The pirates did not want to participate in it and began to desert or to go underground, which led to another big of radicalism within the movement.

With the deterioration of the situation on the front of the pirates dare and began to organize the attack on the patrols, to help escaped prisoners of war, Jews, deserters. A frequent occurrence was the sabotage military production, attacks on the concentration camps and blowing up various objects. It was at this time among the “pirates” became a popular song with the lines: “we’ve got fists and we can fight. We have knives and we’ll get them”.

For the detention of young people, not hold Nazi views, the authorities had organized a concentration camp near the town of Moringen through which in 1944 passed 1386 people.

the Most radical among the “Edelweiss” was the detachment of the 23-year-old Hans Steinbruck, which was based in bombed out by allied aircraft the ruins of Ehrenfeld, one of the districts of Cologne. In addition to the Germans in movement was made up of Jews who escaped from concentration camps prisoners, and driven into forced labor people. According to the Gestapo, the squad was 130 people. They had not received ration coupons and grow food illegally. The most famous bloom of the “pirates” became “oil looting”, in which Steinbruck and his associates managed to steal 2.5 tons of this product.

the city group was named after the leader of the “Hans-Bomb”. “Edelweiss” in different ways got the weapon and used it to attack the Hitler youth, Gestapo and Nazi stormtroopers. By 1945 Steinbrueck has conducted 15 attacks, and a series of bombings, including the Cologne branch of the Gestapo.

the Chief of the Imperial security Ernst Kaltenbrunner declared youth gangs enemies of the people, then the “pirates” hunt began. On October 25, the Germans executed the Russian workers who collaborated with “Edelweiss”, and two weeks later the Gestapo hanged 14 detained during raids fighters against Nazism, among them six minors.

During the war, the pirates were executed, and to extract from them testimony, the Gestapo used torture. Despite this, in Germany members of the militant organization for a long time is not added to the Resistance movement. This was partly due to the insufficient number of information and strict control methods. Only 60 years after the war, “pirates of the Edelweiss” has received the official status of fighters against Nazism.