Home Breaking Reverse lend-lease: why did the Soviet Union sent salted herring in the... 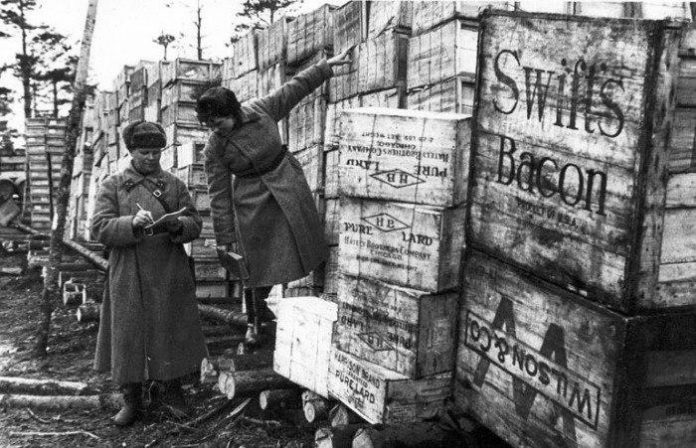 History 06/03/20 Reverse lend-lease: why did the Soviet Union sent salted herring in the UK

In the preamble of the agreement of the Soviet and American governments declared that they are engaged in a common cause with other States, whose efforts are aimed at creation of a durable common world. In Washington, noted that the war the Soviet Union against Nazi Germany is also important for the defense of the United States, and so they are, in spite of any difficulties, to fulfil their obligations to supply in the USSR, those defense articles that the US President was allowed to pass.

the First deliveries of lend-lease arrived to the USSR before the expiration of 1941 and continued until September 1945. Three routes — via the far East, through Iran and through the Arctic — provided in excess of 93% of all lend-lease. The fastest but most dangerous was the Northern sea route for ice-free ports of Murmansk and Arkhangelsk.

According to official data, from the US to the USSR via lend-lease was delivered goods to the total sum of $10.8 billion and a volume of 17 million tons. This is primarily planes, tanks, antiaircraft guns, small arms, ammunition, explosives, and goods for peaceful purposes – cars, locomotives, cars, communications, food, medicine. Approximately 1 million tons of cargo in the USSR never came – he was destroyed by the German fleet in the transportation process.

the Agreement on lend-lease with the American side included three important points:

Supplies are not free but without payment and fast calculation, in the form of long-term loan.TechnicalICA, weapons, and equipment that are deteriorating or are obviously faulty payment can not be.The only compensable to the property, which the USSR after the war decide to keep. All that is unsuitable, be returned to the supplier.

the issue of repayment of lend-lease the USSR and the USA started in 1948. Washington believed that the surviving civil equipment Moscow must pay $2.6 billion, the Soviet side insisted on the sum of $170 million, though later settled on $200 million in installments over 50 years. The Americans lowered the bar to $1 billion Managed to agree only in 1972: agreed on the sum of $722 million, including interest, however, to pay her the Soviet Union did not have time was started in 1991. The debts of the Union had to pay a modern Russia, with which it has successfully coped by 2006.

In the Soviet-American agreement on lend-lease written that the Soviet leadership because of their features also undertakes to provide United States financial assistance, to provide incentives and valuable information – in short everything that could contribute to the country’s defense. Immediately after the first flight of the Arctic transport fleet of the allies in the back was organized by the Soviet convoy carrying mainly woods and metals. These convoys went to the West throughout the war.

According to data submitted to the us Congress on 2 September 1945, reverse lend-lease from the Soviet Union to the United States amounted to about $2.2 million Amounts of Soviet supplies are considerably inferior reverse lend-lease and other allies of the United States. So, the British Empire (including Australia and New Zealand) during the war, was sent overseas goods in the amount exceeding $6.7 billion Delivery France amounted to approximately $867 million, Belgium $191 million, China – $3.6 million, Netherlands $2.3 million.

However, we must not forget that a significant portion of deliveries from the USSR to the United States were exporting and had no direct relationship to reverse lend-lease. According to the Handbook, “External trade of the USSR for the period from 22-VI-1941 to 31-XII-1945”., all exports from the Soviet Union to the United States for the period from September 1941 to December 1945, amounted to more than $ 223 million. What goods were American allies? It is quite an extensive range of:

Chrome ore and manganese ore, platinum, iridium, palladium, precious stones, petroleum products, timber, chemical concentrates. A lot of raw materials of animal origin: bristles, horse hair, fur, feathers, sheepskin, camel hair, cotton noils, lamb intestine. Is on the list and food products: the cask caviar, canned crab and yellow tobacco. It should be noted that a large quantity of goods was delivered above the norm prescribed in the agreement.

of Course Soviet shipments to the US had such a large value as the American lend-lease, which allowed to close some of the gaps in the Soviet military economy and saved the lives of many thousands of soldiers of the red army. American industrialist Edward Stettinius, who served as Secretary of state under presidents Roosevelt and Truman, in his book “lend-Liz — oruzhie Pobedy” noted that Americans don’t demand from the Soviet Union more aid than they send US because they understand that the Soviet Union fell the main burden of the struggle against fascism and above all the power to give victory over the enemy.

during the war of material assistance to the Soviet Union had the UK, albeit on a smaller scale. Only from late 1941 to may 1945 from the British Isles arrived in the USSR about 4 mln tons of cargo for defense purposes, including food and medicines. The total cost of the British lend-lease amounted to 428 million pounds.

unlike Washington and London demanded immediate settlement for the goods in payment of British supply was the same Arctic convoy, only this time in the direction of Albion. The Soviet Union paid for delivery from the UK mostly sRotom. According to some, the total amount of payments estimated in the amount of 55 tons of gold.

One of the ships carrying Soviet gold to the British Isles, was the cruiser “Edinburgh”. At the end of April 1942, he came from Murmansk, however, at a distance of 187 miles from the coast were attacked by the German destroyers. The crew decided to sink the ship with a valuable cargo, which received some serious holes, and go on accompanying the “Edinburgh” British military court.

while the technology is still not allowed to get to the surface of the gold at a depth of several hundred meters, so for a long time, “Edinburgh” was among the priority objectives of hunters. Only in 1986, a research expedition was released from the sunken cruiser its treasures – about 5.5 tons of gold bullion. Values were divided between Britain, the USSR and the firms rescue.

Payment by the Soviet side of supply on the British lend-lease occurred prior to June 27, 1942, when between London and Moscow signed an agreement under which a further British military assistance to the Soviet Union for the period of hostilities was carried out on a gratuitous basis. But the Soviet side has not stopped supplying goods to Albion, some of which were gifts to the British government.

In many memoirs there is a story that during the Yalta conference, held from 4 to 11 February 1945, Winston Churchill regaled Sosva herring, which he ate Armenian cognac. The treat supposedly was so pleased with the British Prime Minister that loved a fish, he began regularly to send home. Sosva herring, also known as tugun, is a freshwater fish of the salmon family. This endemic species is found only in Russian rivers flowing into the Arctic ocean. Gourmets assert that the most delicious tugun lives in the Northern SOS’va, a small tributary of the Ob, near the village of birch in the Khanty-Mansi Autonomous district.

Since SOS’va herring RelSilas to valuable species of fish she had caught and was supplied in limited quantities. Subsequently, the Soviet authorities have given permission in the UK for extraction of tugun trawler. But, according to the contract, this can be done only once a year and only for a limited time. The entire catch was weighed and checked out. At the time SOS’va herring is considered the most expensive fish in the world – the penalty for its illegal production accounted for 25 rubles apiece, while for sturgeon only 5 rubles.