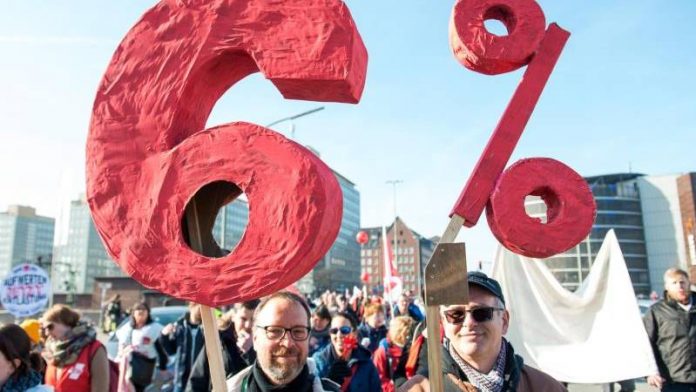 The collective bargaining conflict in the public service is coming to a head. With Strikes in several countries, trade unions have increased the mounting pressure on the employers ‘ side, as several trade Union spokesman of the German press Agency confirmed.

In the North of Germany began in the Morning all-day country-wide Strike in which Employees of numerous Hamburg authorities, as well as all the country administrations in Schleswig-Holstein are involved.

In several cities, rallies were planned. In North Rhine-Westphalia, Employees of the clinics in Aachen, Bonn, Düsseldorf, Essen and Cologne, laid down their work. In Thuringia, among others, teachers, and staff of the University hospital Jena were called for Strikes.

In the collective conflict the trade unions such as Verdi and the civil servants Union dbb for the employees of countries six percent more money, but at least 200 euros more per month. The third bargaining round is for the 28. February and 1. March planned. The opposite side holds the claims to be exaggerated. “I do not exclude at the Moment is also an escalation,” said Verdi head Frank Bsirske the Newspapers of the Funke media group. Hesse is not involved in the negotiations.