Home Breaking The default of Russia in 1998: what happened actually 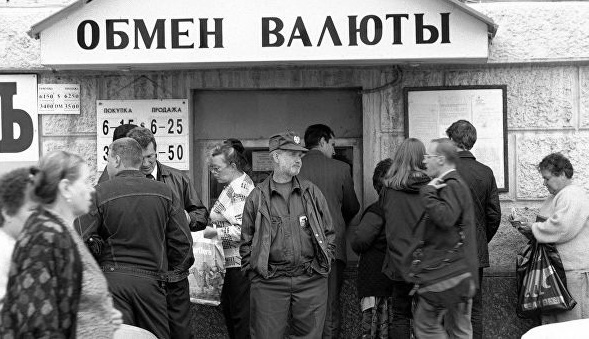 Many of the 1990-ies was remembered as a time of financial pyramid MMM, “Vlastilina”, Khoper-invest, Herbalife… But the great pyramid was organized by the Russian government, releasing state short-term obligations – Federal loan bonds, GKO-OFZ. Some believe guilty of default Sergei Kiriyenko, announced it. But he is no more than a messenger who brought bad news. Take a look in the engine room and understand how the mechanism that led to the default.

the Economic situation in Russia

I would Like to note that it is incorrect to define the crisis the word “default” as the term refers to nothing more than a refusal to meet financial obligations. But the default was the trigger for the ensuing crisis.
the Beginning of the 90s in Russia is characterized by hyperinflation, which reached hundreds of percent per year. The situation was complicated by the need for the payment of the external debt Russia inherited from the Soviet Union. The Treaty on succession to external state debt and assets of the USSR was signed in Moscow on 4 December 1991, it was determined the share of Russia in the debt 61,34%. As of January 1, 1992, the external debt of the Soviet Union was set at $123,8 billion, writes Yegor Gaidar in his book “death of the Empire”. It was in June-December 1992 he held the post of acting Prime Minister of Russia, so know that as a Yes.
Russia needed non-inflationary source of capital. Who and how proposed to issue of GKO-OFZ, is still unknown. But the financial instrument was accepted “on hurrah”, when it was launched in 1993. According to the newspaper “the securities Market”, investors in five years (1993-1998) earned on GKO-OFZ market of $28.9 billion, the Ball is ruled by foreigners.
State issued GKO-OFZ with the speed gun, from 80% to 100% of the market of government securities took this tool. The government has not thought about the consequences, making repayments from previous editions of money from the subsequent. Not counting the first year of circulation, the GKO-OFZ, in subsequent years, the average volume of bond issuance was $50 billion, which was higher than the annual budget of the country even in the course of those years.
macroeconomics began to improve. So much so that in 1997, the Central Bank of the Russian Federation held a denomination, and again put into circulation a coin of 1 penny. Inflation declined from 197% in 1995 to 14% in 1997. The financial deficit of Russia has fallen by half: 11% of GDP in 1994 to less than 5% of GDP in 1995.

But then Russia failed macroeconomics. Began to swoop down world prices for commodities and oil, the sale of which was the main source of foreign exchange earnings to the Russian budget. In the fourth quarter of 1997, market sentiment deteriorated sharply in the Asian crisis in July 1997, and seized not only all of Southeast Asia, but the waves dispersed around the world. As a result, foreign investors began to buy less of the GKO-OFZ market, the inflow of money has dried up. In 1994-1997 at the primary auctions usually housed 80%-95% emissions in 1998, about 20% -40%, according to the data of MICEX, CB and AK&M. had to cover liabilities from the state budget, and he was scarce. In November 1997, the Russian ruble has been speculative attack. The Central Bank of Russia defended the currency’s value, losing almost $6 billion in foreign exchange reserves, which fell from $23.1 billion in the third quarter of 1997 to $17.8 billion in the fourth quarter of the same year. It became clear that the music play for long. Did not save the situation even received in 1998 a loan from the IMF in more than $4 billion – money needed for many things, not only on the repayment of GKO-OFZ. And the Russian government went to the extent of over 80 years prior to that applied by the Bolsheviks, the failure of payment, declaring August 17, 1998 default. In August 1998, the GKO has frozen about $37 billion at face value, or $29 billion at the offering price. Foreign investors feverishly to withdraw capital from the Russian market, a major Corporation was shutting down the business. But to cut our losses and leave we had not all. For example, the hedge Fund Long-Term Capital Management stuck so deeply that declared bankruptcy. Did not save even the presence of the Board of several winners of the Nobel prize in Economics.
Kirienko resigned on 23 August, his place was taken by Chernomyrdin. Within a month he resigned the leadership of the Central Bank.
Natalia Orlova, chief economist at Alfa Bank, head of the Center for macroeconomic analysis finds that the default was imminent and the country’s economy teetered on its edge for 1991-1997: “the Fall in oil prices in 1998 just made it impossible to continue the extension of the debt pyramid, but the default was predetermined a huge amount of inherited debts and a deep economic crisis of the early 1990s”.
overall, the Russian economy shrank by 5%. The deep devaluation of the ruble increased the competitiveness of the Russian economy, and freed from the foreigners market niches given the opportunity to grow the domestic business. Orlova says that the severity of the perception of default stems from the fact that he became the final chord in a continuous economic decline of the 90-ies. Growth of 1% was recorded only in 1997, but the situation is not saved.