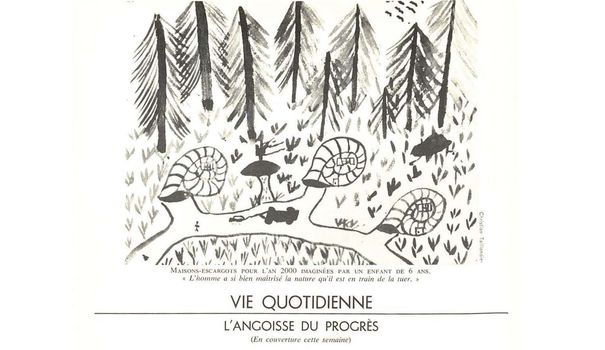 By sending three men turn around the Moon during the night of Christmas, America has demonstrated that the ambitions of the science and technology were now without limits. It was enough to want to be able to. But wanting what ? In this night when the peace was promised to men of good will, how many of them, while admiring unreservedly the feat of Apollo 8, have thought that the money thus spent might have been better used to cure cancer ? Or to feed the multitudes of hungry in India. Or even, simply, to enable the workers to the suburbs to make themselves more quickly to their work.

Because it is accepted that science is a good girl and gives what is asked : from atomic bombs or nuclear power plants, rockets, cars or hospitals.

“This is the error,” protested Mr. Guy Gresford. He is an engineer. Australian and expert to the united Nations. Since 1962, he has directed the department of Science and technology within the department of economic and social Affairs. “For six years, we’ve relied on science to ensure the economic development, to bring prosperity to the world,” he says. Today, we begin to ask ourselves if we do not play the sorcerer’s apprentices. Because science also has its logic, which does not always take into account the will of men”.

It is not the only one to be worried about. In the month of December, some of the greatest american scientists, under the patronage of the very respectable Association for the advancement of science, met in Dallas to denounce the evils of technology triumphant. On may 22, the Sweden, taking advantage of the 44th session of the united Nations, has formally requested the convening of an international conference to review the threats modern life poses to humanity.

The developing countries, eager to kilowatts and industrial investment, could lose interest in the case, or even consider the Swedish proposal as a manoeuvre of the country prosperous. The file was so convincing that the project, taken up by fifty-four countries, was unanimously adopted, on 4 December, by acclamation.

This conference on man and his environment must be held in 1972. Mr Carlos Chagas, a biologist at the brazilian, who chairs the committee responsible for preparing it, said : “It must be the opportunity to enact, for the first time, a true declaration of the rights of man in the face of progress”.

The Nineteenth century had been completed on the idyllic vision of a transfigured humanity through material progress. The universal Exhibition of 1900, in Paris, was entirely a hymn to science. The end of the Twentieth century, which has achieved and even exceeded the wildest dreams of the Belle Epoque, will she be marked by the condemnation of this same material ? A progress which have not yet become aware of the three-quarters of humanity, and who is hitting that the privileged of the major cities in North America, Europe and Japan. As the backdrop it is in the process of weaving is not the one imagined by our grandparents.

electricity, in 1900, meant the light at home. Today, it evokes the atmosphere irremediably polluted by the smoke of the central giant, that make New York one of the cities with the most sales in the world ; it brings in its wake the algae and the fish of the rivers rendered radioactive waste of the atomic. The car, it was the elation of riding 80 km per hour. Now, it is the road accidents, congestion inextricable in the heart of the capitals sprawling. The man in developed countries has increased his possibilities of happiness. But it pays. And in a currency that he had not imagined.

The first telephone, the first radio station were wonderful instruments. One could believe that the role of the science and the technique was only to facilitate life, to embellish it. And who would deny that they have embellished ? But as they spread their empire, we discover that there was a misunderstanding, that in reality they are life-changing. Radically.

The modern man – at least that of the developed countries – consume throughout the year, fruit coming out of cold storage, the meat under cellophane, frozen French fries. One pupil, for him, chickens, cows artificially inseminated, cereals corrected by the geneticists. Tomorrow, perhaps, we eat steak in oil.

Since 1900, life expectancy in the industrialised countries, increased from 47 years to 71 years. It is a progress, capital, indisputable. But the very concept of health is complicated. In the past, it was simply the absence of disease. Today, the man of affluent societies, who wants to remain healthy should be vaccinated against ten diseases, and soon against simple ailments such as the flu or the common cold. He needs to monitor his weight, the balance of its power, the fight against infringements of the age, suffer the bureaucracy inquisitorial social Security.

It was sleeping pills for insomnia, tranquilizers against the excitement, the highs against the cockroach. Soon, thanks to the air conditioning, he would take it the slightest variation of temperature as an assault against his intégrité physical. Everything comes from what science and technology do not solve problems such as the men involved. Following their own path, they meet up on the way, the deal from their own point of view and, hence, moving the issues.[…]

Since 1900, the income of the French has been multiplied by three. Science and technology have brought the abundance. But on their own terms. The progress has not allowed all the women to wear silk stockings : all of the mulberry trees of the world would not have been enough to raise enough of bombyx. He has created a novel fibre, synthetic, nylon.

The progress has not offered to every household at a particular hotel, or even a house in the millstone. To cope with the expanding population and the development of cities, it was necessary to invent beehives cement, steel and glass, the “machines for living” so dear to Le Corbusier. One of the essential reasons of the housing crisis is the failure of the technique, until now, to completely renew the traditional methods of construction.

Because the science is invention, the progress may not be that mutation, and the economists begin to measure it by this criterion. They have calculated that 14% of the profits to the american film industry were achieved on products that did not exist five years ago, products that were not added to the former, but that had been replaced, as the transistor has swept the lamp radio.[…]

A scale, any citizen of the industrialized countries is a kind of cosmonaut on-board strength in the rocket technology. Because it has not changed at the same time as the machines, objects, social habits. It remains that homo sapiens, appeared on earth some fifty thousand years ago, and of which the biologists teach us that it has not changed since, neither in its physical capacity nor in his abilities and legal entities.[…]

The construction of roads impacts on the environment, in L’express n°917 of the February 3, 1969.

that’s Because science, technology, progress, innovation, sometimes it takes time to see all of the consequences. […] Antibiotics have been used indiscriminately ; today, we do not know how to disinfect some hospitals, haunted by microbes that are resistant to all drugs. It has the force of hygiene, it has transformed of the disease, usually mild in childhood, such as polio, serious disease.[…]

The progress is no longer totally unpredictable. Between the invention and its passage in the daily reality, we saw that it always runs in a timeout, which allows time to reflect and, possibly, to act. To avoid, for example, to support, as in France, a powerful automobile industry, without providing at the same time the highways and the parking lots that it requires. […] In a few years, the development of computers will be hampered by the lack of lines to process information at a distance.

The Office of information and prediction économiques (Bipe) has recently carried out a study on the future of the textile industry, still in France. It shows that machines with mechanical control are still relatively rare, but that the job will be general in 1980. Now, however, we can anticipate that the machines electronic control system, connected to a central computer, their successors. For the moment, they exist only on paper. In 1980, they will be exceptional. However, their massive use, a few years later, will condemn them to unemployment, almost all of the 350,000 workers employed in the textile, or 5 % of the workforce in French.[…]

The butter or the guns

the control of The progress, which the governments are now trying to lay the groundwork, timidly, through the planning, it is in the scale of humanity has become a planetary that it becomes urgent to undertake it. It must go through the biology, natural sciences, geography, sociology, economic theory. It cannot be conceived even without the use of computers, which multiply and accelerate the work of the human intellect.[…]

It is not enough that the united Nations shout of alarm which could remain without echo. It is not even enough to ask the voters to vote for the butter or the guns, for the strike force or to the hospitals, to decide on an outcome when it is already too late to dodge the consequences. It is at its source it is necessary to seize the progress, and monitor day-to-day development if we claim to guide it.

only Then the problem will take its real dimension. Set at the foot of the wall, faced with the long-term consequences of his acts, the man will realize that the conflict is not between him and one knows not what mysterious power technology, but within himself.[…]

the goals of science are clear, even if they seem inaccessible. We can define them with precision, the exact means to implement to achieve them. But how to reconcile man with himself, put his gut instinct agreed with his intelligence ? It is easier to go to the Moon than to make a man happy.