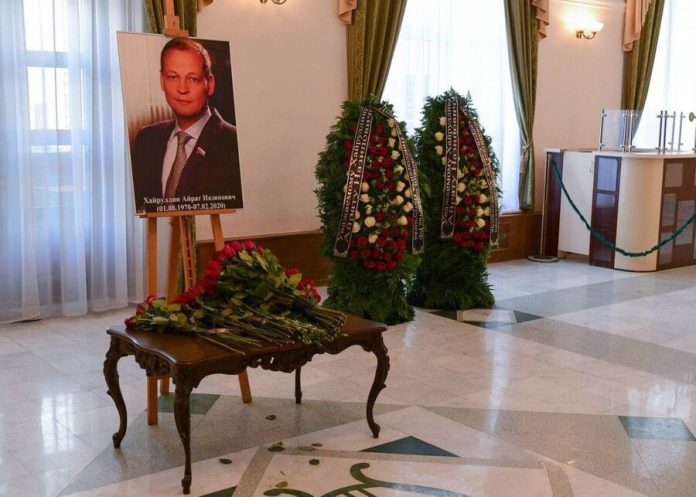 the funeral of the Deputy of the state Duma Khairullina in the Kazan village of peace ended. About it RIA Novosti reported, citing the Parliament of Tatarstan.

it is Known that the MP was buried at the Muslim cemetery.

“Ayrat Khairullin of Nazipovich buried in a Muslim cemetery in Kazan village of Mirny, near my mother’s grave,” – said the press service.

the Ceremony of farewell with Khairullin took place in the Tatar state Philharmonic society named after Gabdulla Tukay. Condolences to the family of the deceased was expressed by the speaker of the state Duma Vyacheslav Volodin, head of the faction United Russia in the lower house of Parliament Sergei Neverov, Deputy Chairman of the security Council, Dmitry Medvedev, and other officials.

the crash of the helicopter with Khairullin on Board became known yesterday. The result is a hard landing, injuring two people, one was killed. It was later revealed that he died the MP. A member of Parliament he was in IV, V, VI and VII convocations, represented the party “United Russia”.

According to the UK, the cause of the tragedy could be an error of piloting, technical malfunction and bad weather conditions.

the Volga transport Prosecutor’s office added that the helicopter Bell 406 is the property of the company “East TRANS”.