Home Breaking The secret war on the Soviet Union: many Soviet soldiers were killed... 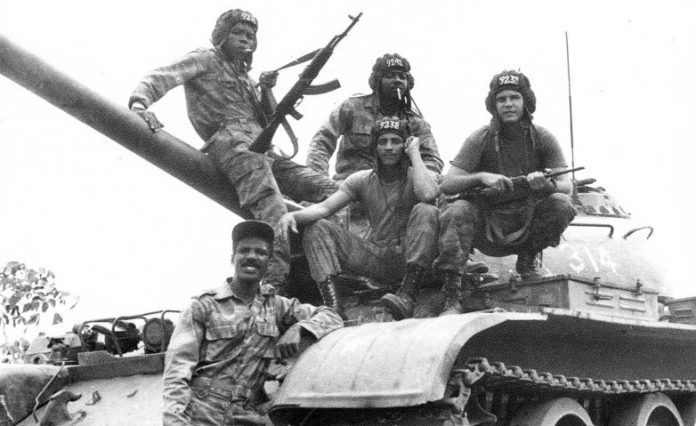 History 14/03/20 Secret war on the Soviet Union: many Soviet soldiers were killed in Angola

this little to say, but during the cold war, the USSR defended its interests not only in countries sotsbloka, but in the distant Africa. Our military took part in many African conflicts, the largest of which was a civil war in Angola.

that the Soviet military fought in Africa for a long time it was not customary to say. Moreover, 99% of Soviet citizens did not know that in the distant Angola, Mozambique, Libya, Ethiopia, North and South Yemen, Syria and Egypt were Soviet military contingent. Of course, heard rumors but not confirmed official information from the pages of the newspaper “Pravda”, were treated cautiously, as tales and fantasies.
meanwhile, on the 10th Main Directorate of the General staff of the Soviet armed forces from 1975 to 1991 through Angola passed 10 985 generals, officers, ensigns and privates. To Ethiopia during the same time was sent 11 of 143 Soviet soldiers. If we take into account the Soviet military presence in Mozambique, we can talk about more than 30 thousands of Soviet military officers and enlisted personnel on African soil.

However, despite the scale of this, the soldiers and officers performing their “international duty” were as if non-existent, they were not given awards and medals, their exploits did not write the Soviet press. Their like has not been for official statistics. In the military service of members of the African wars, as a rule, there was no record of the trips to the African continent, and just stood there inconspicuous stamp with the part number, which hid the 10th Directorate of the General staff of the USSR. This situation is well reflected in his poem military translator Alexander Pelevin, who wrote during the battles for the city of Kuito-the Cuanavale

“Where are we, buddy, you brought
Naverno, a big and important thing?
And we say: “You there could not be
blood And Russian Angola the earth was burning.”

Immediately after the overthrow of the Portuguese dictatorship, on 11 November 1975, when Angola got the long-awaited independence in this African country were the first military experts, the forty-person SWAT and military interpreters. Fifteen years fought with the colonial troops, the rebels were finally able to come to power, but this power still had to fight. At the helm of Angola was a coalition of three national liberation movements: the popular movement for the liberation of Angola (MPLA), National Union for the total independence of Angola (UNITA) and National liberation front of Angola (FNLA). The Soviet Union decided to support the MPLA. With the departure of Portuguese Angola became the scene of a battle for geopolitical interests. Against the MPLA, backed by Cuba and the Soviet Union were made by UNITA, FNLA and South Africa, which, in turn, supported by Zaire and the United States.

What did the Soviet Union, when he sent his “African forces” to distant lands, in distant Africa? The objectives were primarily geopolitical. Angola saw the Soviet leadership as an Outpost of socialism in Africa, it could become our first enclave in South Africa and was able to resist the economically strong South Africa, which is known to have supported the United States.

during the cold war, our country could not afford to lose Angola, it was necessary to help the new leadership of the country to make the country a benchmark of the African socialist state is guided in its political objectives on the Soviet Union. In terms of trade relations Angola was represented for the Soviet Union had little interest, the scope of export countries was similar: timber, oil and diamonds. It was a war for political influence.

On the significance of Soviet aid, simply said at the time, Fidel Castro: “In Angola there would be no prospects without politnical and logistical assistance to the Soviet Union”.

and what is war?

From the beginning of the military involvement of the USSR in the African conflict they were given carte Blanche to conduct military operations. Reported obtained from the General staff of the telegram, which stated that military professionals are eligible to participate in the fighting on the side of the MPLA and Cuban troops.

in addition to “manpower”, which consisted of military advisers, officers, warrant officers, privates, sailors and frogmen (USSR seconded to the shores of Angola and several of its military ships), Angola also supplied weapons and special weapons.

However, as he recalls the war Sergei Kolomnin, weapons still wasn’t enough. However, not enough and the opposing side. Most were, of course, Kalashnikov rifles, both Soviet and foreign (Romanian, Chinese and Yugoslav) Assembly. Also was a Portuguese rifle W-3, the remaining from colonial times. The principle of “how may I help you” manifested in the delivery in Angola remained since the great Patriotic war reliable, but somewhat outdated by the time the PFA, PCA and machine guns Degtyareva.

the military Form of the Soviet military in Angola was without insignia, the first time was taken to put on a Cuban uniform, the so-called “Verde Olivo”. She was not too comfortable in the hot African climate, but the military usually do not choose your wardrobe. Soviet soldiers had to resort to military intelligence, enjoy a more mild form tailors. To change gear at the official level, adding the insignia and to change the material once conceived, Lieutenant General Petrovsky, but his proposals were met with a command of hostility. On the fronts of the Angolan people were dying, to do in such circumstances, questions of form were considered to be frivolous.

Angola, as well as Lebanon and other African countries we missed. Now we can talk about it. COHYes the Soviet Union collapsed and the country has changed the political course, our troops were withdrawn from Africa. The Holy place, as we know, is never empty. The President of Angola, the same Soul Santosh (who, incidentally, graduated from Baku University and is married to a Russian) had to find new allies. And, not surprisingly, they turned out to be the US.

the Americans immediately stopped supporting UNITA and switched to aid to the MPLA. Today in Angola, working for American oil company, the Angolan oil is exported to China, has interests in Angola and Brazil. However, Angola remains one of the poorest countries in the world with a poverty rate of 60 percent, the epidemic of HIV and total unemployment.

Soviet Africa has been an unfulfilled dream, and several hundred Soviet military, who arrived there to fulfill their “international duty” back will never return.