Home Breaking The security forces are returning to using bullets against the protests of... 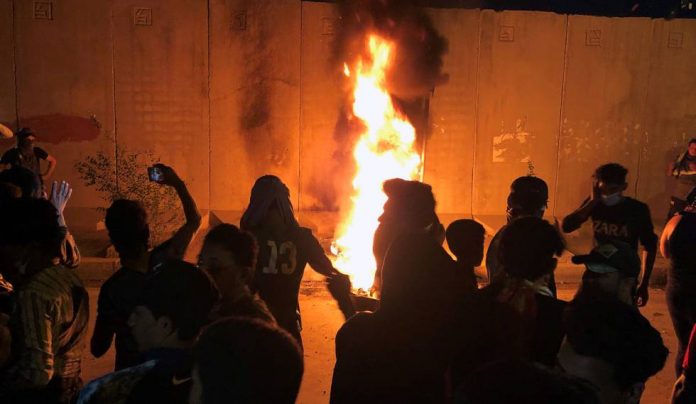 iraqi security forces have returned to use this Monday live ammunition to repress the protests in Baghdad, where they have killed at least five protesters. This hardening continues to a statement made last night by prime minister Adel Abdelmahdi, in which it requested the cessation of mobilization because they have already served a large part of the claims and has serious economic costs. In addition, four other people were killed in Kerbala, also by weapons fire, when they tried to storm the Consulate of Iran in that city.

The populist Al-Sadr tries to ride the protests of Iraq, the voices of the protest in Baghdad, The chaos in Iraq encourages the comparison with the era of Saddam

A photographer from the Reuters news agency witnessed how a man received a shot when the police opened fire on protesters in the vicinity of the bridge of Ahrar, one of the 13 that connect the two banks of the Tigris in Baghdad. In addition, he saw four other dead bodies. Also France Presse has picked up testimonies of people who claim that security forces fired live bullets against the demonstrators who were moving towards the headquarters of state television, which is located very near the aforementioned bridge.

however, medical sources and security encrypted victims to 4 dead and 34 wounded, but only confirmed dead by gunshot wounds; two others, they say, were struck by rubber balls and cartridges of tear gas, and does not provide data on the death of the fourth. Apparently two of the dead, including one police officer, were killed when the special forces that protect the Green Zone and shot at the demonstrators. 22 other people were injured.

According to a spokesperson of the prime minister, a group managed to cross the bridge to The Yumhuriya and set fire to a restaurant, which led to the reaction of the agents. However, the Efe news agency quotes a source in the Ministry of the Interior which rises to seven the dead and attributes it to the stampede which led to the use of tear gas and water cannons to disperse protesters who were trying to go through that step that connects Tahrir square, the epicentre of the protests, with the Green Zone, where are located the main headquarters of the political power against which they have raised the iraqi people.

Be that as it may, it is the first time that police used live fire in Baghdad since resumed their protests on Friday 25 October. In the first week of October, 157 were killed, 149 of them civilians throughout the country. The official report thereon concluded that 70 % of the deaths had been caused by gunshot wounds in the head or chest, and he blamed the security forces for excessive use of force. At this point the fatalities exceed 300.

The prime minister broke his silence on Sunday night to claim “back to normal”. In a televised said that “they have already satisfied many of the claims”. Abdelmahdi said that he was willing to resign if the political parties came to an agreement to succeed him, something that for now seems far away. However, the protesters do not want to simply replace one politician by another, or trust in the promises of early elections, a change in the system of access to the civil service and review of pensions.

it Also became to use live ammunition in Kerbala, where four protesters were killed after confronting the police officers guarding the Consulate of Iran in that city. Around ten on Sunday night, several hundred people gathered in front of the diplomatic representation. According to the High Commission of Human Rights of Iraq, the crowd was trying to enter the Consulate and haul the flag of Iran that flies over the building. According to police sources, tried to burn it down.

it Is the second similar incident that takes place in Kerbala, a hundred miles south of Baghdad and site of one of the main mausoleums shi’a, in a week. In both cases, and also in the protests in the capital, Iran is at the center of the criticism. The protesters reject their influence on the political class, iraqi, and, above all, the militias they sponsor. Even though two-thirds of the 39.5 million iraqis share the shi’a islam is the official religion of Iran, have finished fed up with the islamist parties (most of them linked to the neighboring country) and want to leave the sectarianism out of politics.

a week Ago, at least 18 protesters were killed in the same city of Kerbala when the security forces and, according to some witnesses, “men dressed in black” not only shot them, but they chased through the alleys to those who tried to escape. The incident, denied by the authorities, occurred shortly after an influential leader of the Forces of Popular Mobilization ordered his men “to oppose the disagreement” as a result of the participants in the protests burned a portrait of the iranian supreme leader, ayatollah Ali Khamenei, and attacked offices of political parties and militias associated with Iran.