Home Breaking “The white God of war”: why is it called the Baron Ungern 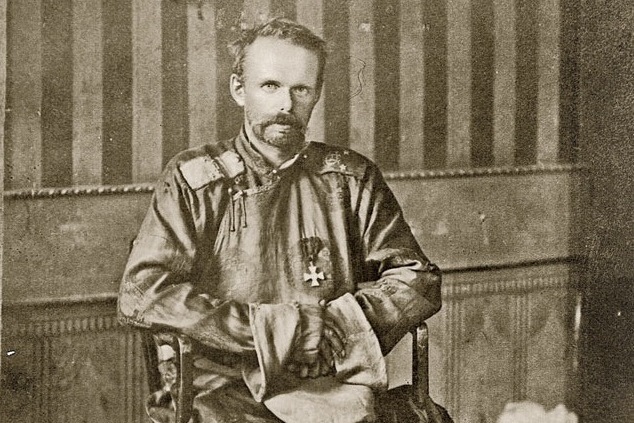 the Mongols called the Baron Ungern’s “white God of war.” He wanted to restore the Empire of Genghis Khan and to save the monarchy in the world. In their aspirations Baron was paradoxical and courageous, but he was betrayed by his own officers.

the Heir of Attila, pirates and Teutons

the Full name of the Baron Ungern – Robert-Nicholas-Maximilian (Roman Fedorovich) von Ungern-Sternberg. Birthplace of “the white God of war” in Austria, during one of the parent trips.

Rod Ungerne came from the Hans von Ungern. In 1269 he was a vassal of the Riga Archbishop.

About their ancestors the Baron Ungern said, “I come from an ancient family of Ungern von Sternberg, it is mixed German and Hungarian — from the Huns of Attila’s blood. My warlike ancestors fought in all the major European battles. Took part in the Crusades, one of Angerno fell at the walls of Jerusalem under the banner of Richard the Lionheart. In tragic crusade of the children killed eleven-year-old Ralph Ungern”.

Also in the family of Baron was the Teutonic knights, and, as he assured, knight-errant, nicknamed “the Axe”, the knight-robber Ralph Ungern and alchemist of the seventeenth century, Wilhelm Ungern, who was referred to as the “brother of Satan”.

To matters of faith Roman Ungern came with his characteristic originality. In the interrogation of Baron Ungern he calls himself a man of faith in God and the gospel and practicing prayer. This is indirectly confirmed by the letter of Ungern, they often quotes from the Scriptures.

However, during a conversation with the writer-occultist Ferdinand Ossendowski, Ungern said: “His life has been spent fighting and studying Buddhism. Grandfather was introduced to Buddhism in India, my father also recognized the doctrine and have confessed it.”

the Baron Ungern professed Buddhiste philosophical teachings of the Chittamatra, one of the branches of Mahayana, spread among Tibetan lamas. One of its provisions States that reality is a game of mind and imagination.

Another Baron Wrangel, Ungern thought about, detached from reality: “Ragged and dirty, he always sleeps on the floor among the Cossacks their hundreds, eating from a common pot, and being well-mannered in the face of cultural wealth, gives the impression of a man completely detached from them.”

On the part of Buddhism Baron Ungern managed to achieve high status among the Mongol lamas in February 1921, after the capture of Urga, Ungern, they recognized him as the avatar of Mahakala, six-armed God of war and destruction.

looking for a war,

Military career of Roman also was non-trivial. In 1902, his stepfather gave him the Naval cadet corps in St. Petersburg. Ungern also differed from childhood willfulness and absence of all concepts of the discipline.

after three years of uneven study, it expelled from the body, but the outbreak of the Russo-Japanese war does not give the 20-year-old Baron to sit still – he receives a volunteer of the 1st discharge in the 91st Dvinsky infantry regiment, which never appears on the front.

Ungern literally wants war, she beckons him. The Baron goes to completion in the 12th Velikolukskiy regiment, went to Manjuria, but by the time of his arrival the fighting is over there.

In November, 1905, Ungern received the rank of corporal. From 1906 to 1908 – studies in the Pavlovsk military school, after which is credited in 1 Argun regiment of the Transbaikal Cossack army with the rank of cornet. In the regiment he again chudit: pari arranges, participates in duels. In 1910, over it still is the court of honor, Ungern transferred to the 1st Amur Cossack regiment.

two years later, it is produced in the captains of hundreds, but the Baron makes another “trick”: resigns and goes to Mongolia. Riding alone, without supplies and out of bed. The formal goal of Ungern – join Mongolian the rebels in their struggle against China. After debate and assurances in the Dobronravov Ungaro allowed to serve only as supernumerary officer in the convoy of the Russian Consulate. The First world war, the future “white God of war” is racing toward her.

the First world, Dorval, finally, to the front, Roman Ungern shows miracles of courage, bordering on the fanatical fatalism. It was said: “he Either wants to die or absolutely sure bullets can’t harm him”. For his exploits of Baron Ungern was awarded five medals, including St .. George 4-th degree with the inscription “For bravery”.

In September 1916 Ungern gets a boost: of the centurions it is produced first in podesaul, and then to captains. Then to him will cleave one of the nicknames of “captain-Baron”. It would seem – serve, but Ungern can’t just serve, he falls into a scandalous history (drunk beat up the commandant), the result of which gets sent to the Caucasian front. According to one version, he was poisoned there nedolyublivavshiy “Cossack-Buddhist” Wrangel.

On the Caucasian front Ungern took the initiative. Together with his friend Georgy Semyonov it creates the volunteer corps of the Assyrians. A major impact on the course of the war they had: the First world slipped into a Civil war. Ungern and Semenov go back to Baikal.

Ungern was a “warrior of peace”. And a staunch monarchist. For him the idea of the monarchy was an obsession.He dreamed about the upgrade of Eurasia under the monarchist banner, believed that the Asian peoples it is best to awaken and guide against the “decadent West” and the leprosy of the revolution.

Black Baron dreamed of creating power, which would have United the nomads of the East from the shores of the Indian and Pacific oceans to Kazan and Astrakhan. Her first fraction was to become Mongolia support in China, the ruling dynasty – the house of China that the Chinese have overthrown during the Xinhai revolution 1911-1913-second period. The revolution, Baron Ungern the hatel as much as believed in the monarchy.

In Dauria, Ungern established a strict regime of personal power. The former bully, now he believed in discipline, a recovering alcoholic, he introduced in his division “dry law”. Any violator of the law, regardless of rank or grade, were subjected to the most cruel punishments. In Gusinoozersk datsan for robbery of baggage Ungern whipped all the lamas (from the interrogation Protocol).

Ungern was torn between love for the monarchy and hatred of the revolution. Already having decided the liberation campaign at USU, he in the autumn of 1920 comes into collision with the troops of the far Eastern Republic. The forces are unequal, Ungern hiding in the Mongolian steppes, again cobble together a squad and twice trying to storm the USU, but in vain. He again retreats, but for the purpose of collecting reinforcements.

Under his banner are Russians, Buryats, Mongols, Buddhist priests and monks. The Lord of Tibet – the Dalai Lama XIII called Ungern fighter for the faith and sent to help the regiment of guards. This arrangement of the Dalai Lama was due to the fact that the Chinese have arrested “living Buddha” – urginskaya high priest and ruler of Mongolia Bogd Gegen. The Mongols believed in the power of the Baron. From the end of 1920, 35-year-old Roman Ungern was called Tsagan Burkhan, “God of war”.

the University was released on 2 February 1921. Before that, during the siege, Baron Ungern led the Chinese people from his agents in broad daylight, managed to rescue from captivity Bogd Gegen, and Ungern himself without the protection and cover visited in the city, and finally moved away to his bamboo cane sleeping time. Then one of the Chinese generals, Guo Songling, considered a good luck sign and Ungern fled the besieged Urga, together with 3 thousand select cavalry corps.

Ungern took USU, courted fame, got a lot of gold and titles to the Qing-Wang, Prince of the 1st rank and higher, Khan, with the title “to Revive the state great Bator, commander”. Even released Bogda-Gohan gave Ungern the right to wear Mongolian robe-the kūrma the sacredwow yellow. In it, he on the most famous of his pictures.

“the White God of war” in the spring of 1921 went with the Asian division to the North to fight with the Bolsheviks and to revive the Empire of Genghis Khan. He hoped for the support of Semenova, but an old friend at this time no interest in the mission of the Baron is not shown, since this is recognized Ungern guerrilla squad and went with the Baron ideologically.

the Reds became increasingly stronger. The Baron again had to return to Mongolia, but he understands the insufficiency of his resources to fight and decides to go to Tibet to join the Dalai Lama.

These plans will not come true. Officers of the Asiatic division organize a conspiracy against your commander. In August 1921, Ungern is captured by the Reds. On 15 September, immediately after the trial in Novonikolaevsk (now Novosibirsk), his shot, although on January 17, 1920 issued a decree of the Central Executive Committee and SNK on the abolition of the death penalty against enemies of the Soviet power.

it is said that before the shooting, Robert-Nikolai Maximilian von Ungern-Sternberg gnawed his Order of St. George, that he has not got enemies.

Recommended statesalaska… Share: Comments (1) Comments on the article “the”White God of war”: why is it called the Baron Ungern” 15.02.2020 at 21:09 Collegiate Assessor writes: