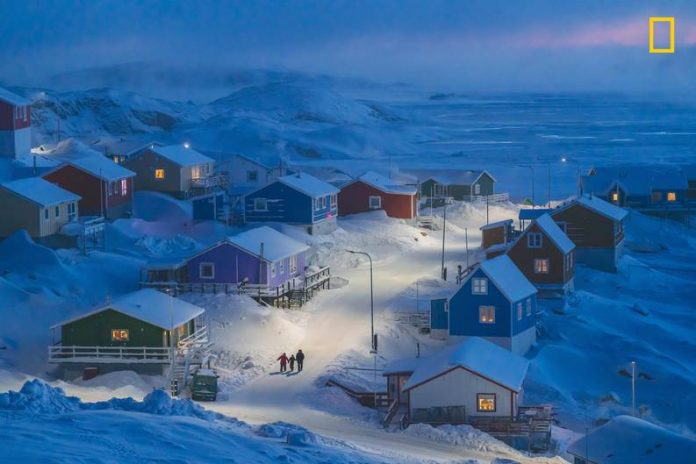 Chu Weiman has the best picture of all of the shot. The Chinese won the first prize in the prestigious photography contest “National Geographic Travel Photographer”, which is endowed with 7500 dollars. His image shows a wintery scene of a village on Greenland. Upernavik, the Name of the fishing village, which is located on a tiny island in West Greenland is. Through the lantern-lit street, three lonely people stroll.

“This photo was taken during my three-month personal photography project to showcase the life in Greenland,” says Chu Weiman. “Historically, Greenland buildings were painted in different colors, different functions, red display Windows to blue fishermen’s houses – a useful distinction when the landscape is covered with snow.”

in Total were submitted for this year’s competition, several thousand photos. Requirements for participation in the National Geographic Travel Photographer of the Year is that the photos were taken within the last two years.

#thatpinkdoor in Palm Springs Instagram-Hype: this is the pink door has received poses of the tourists to the bet By Till Bartels

in addition to the “Grand Prize Winner”, the Chu Weiman for his photo “Winter in Greenland”, received the Second – and third-ranked a cheque for 1500 and $ 750.

the winner in the nature category Tamara Blazques Haik with a fascinating recording of a flying Griffon vulture, which shows only the head and part of the wing. In the category of people Huaifeng Li was awarded the first prize for a photo behind the Scenes of an Opera performance in the Chinese Licheng County.

the glass hut: Beyond SchwedenIn these villas take a holiday as a Pop-star lost Places: These spooky places are right in the middle of Germany