Home Breaking What are the salaries were the soldiers of the Wehrmacht during the... 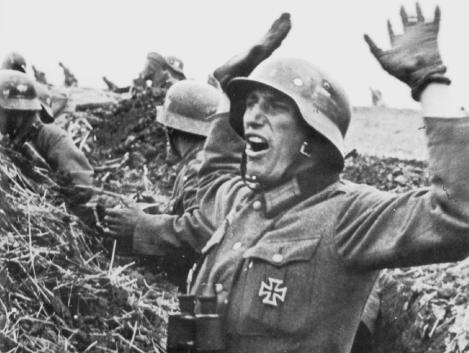 In the German army during the Second world war, the supply was treated very thoroughly. It concerned including salaries. Until 1944 the soldiers of the Wehrmacht received properly put their money.

On the income of German soldiers during the Second world war, we learn from various sources, in particular from the memoirs of soldiers. So, a veteran of the Wehrmacht Armin Scheiderbauer, got to the front after the military College in 1943 at the age of 18 years, noted that he was immediately given the rank of Lieutenant and a salary of 220 Reichsmarks (RM), which was transferred to savings account Bank Stockerau.

Even without a front overhead it was a significant sum, especially for yesterday’s students. In addition to the monetary allowance of Scheiderbauer received a lump sum sewing allowance of RM 750 which you could buy a very decent outfit.

In early 1944, a monthly salary of Scheiderbauer that were still in the rank of Lieutenant, and was for 300 RM. By this time his savings account has accumulated 4 000 the RM, as in the period of constant fighting he had no opportunity to spend money. But the officer at any time could go to one of the branches of the Bank and withdraw the necessary amount.

By the end of the war, the Lieutenant was taken prisoner and after his release, he learned that his Bank has burst, and with him gone and all his money, which he was going with the bride to build a new life. However, according to Scheiderbauer, it was then more concerned with is not money, but their own safety.

Predictable, what is best financially things were the German generals. To his closest associates Hitler, not pitied. According to some information, the best lived Reichsmarschall Hermann Goering, whose total monthly income reached 30,000 RM. No wonder it was called the second man after the führer.

Very generous, Hitler was given to senior army officers at their next anniversary. So, in the spring of 1941 grossadmiral Erich Raeder on the 65th anniversary bonus was paid in the amount of 250 000 RM. The same year later on its 65th anniversary and received field Marshal Wilhelm von Leeb. Considerable sums were also issued to the anniversaries of von Rundstedt, V. Keitel, and von Kluge, and von Kleist and Guderian G. Fuhrer bestowed extensive estates.

with regard to constant monthly income, the high command of the German army field marshals and grossadmiral, they hovered around 4 000 RM while their pay even in the prewar period only partially taxed. During the German generals were able to save enough money to secure a well-fed and carefree old age.

during the Second world war, all the soldiers of the Wehrmacht could count on salary, free of tax (wehrsold, it was called the front cover). However, for a large part of the military wehrsold frozen for the entire period of their stay in captivity.

Salaries were paid either in advance once a month or after equal time intervals, e.g. every 10 days. If a military family had dependents, his family could claim an allowance from the civil authorities, regardless of whether he was acting in part or in captivity.

Professional military in addition to wehrsold received and freidensbesoldung – regular salary, put in peacetime (during the war it was issued including the period spent in captivity). This stipend consisted of a main part of quarterly premiums and benefits for each child.

My salary, the soldier could receive in the form of a check in the commandant’s office at the place of stay, cash was transferred to one of the German banks. Until 1945 freidensbesoldung were normally paid two months in advance, in the closing period of the war – in just one month.

Notmilitary personnel ranging from the rank of chief corporal had the opportunity to ask freidensbesoldung in the commandant’s office, provided that the refuse benefits for dependents. However, there were occasions when the amount of payments to the dependents exceed the regular salary, and then this exchange has become pointless.

Financial support for the soldiers of the Wehrmacht also included additional payments for participation in hostilities (frontzulage) – RM 0,50 a day regardless of rank. Each German military in addition to monetary allowances could count on free meals, housing and uniforms. Food stamps could be exchanged for its cash equivalent up to 3 RM per day.

Below are the salaries of some categories of servicemen of the Wehrmacht in the translation into modern US dollars, excluding taxes ($1 or 0.40 REICHSMARK 1945 year, roughly equivalent to 17 us dollars in 2018). The first digit represents regular salary freidensbesoldung, the second front premium wehrsold:

In military units of the Wehrmacht, the salaries received also legionaries. For the average mercenary until 1945, this amount is equivalent to 30 RM. According to the memoirs of poles who fought in 352-th artillery regiment, his salary was $ 52,50-54,50 RM per month.

the volunteers of the Wehrmacht, the so-called “Jivi”, making depending on ethnicity. So, Russian “hiwi” received 24 RM per month, the poles 45-55 Moldova, the Baltic States – 72 RM + 30 RM front.

About the level of salaries in other branches of the German troops almost no information. However, the Luftwaffe pilot Wolfgang Dirich in his memoirs, wrote that for every flight “crew of destroyer” for attacks on dangerous targets (for example, the British factories) in excess of the normal salary relied hazard pay in the amount of 400 RM.

For comparison, the average salary of the German worker per month during the war years was approximately 190 RM; a pack of cigarettes Eckstein (12 PCs) cost 3,33 RM; the price of daily food rations of the German soldier of 1.35-1.50 is RM; the card to a soldiers ‘ brothel can be purchased for RM 2.

Recommended statesalaska… Share: Comments Comments on the article “What are the salaries were the soldiers of the Wehrmacht during the Second world war” Please log in to leave a comment! br>
Share on Tumblr