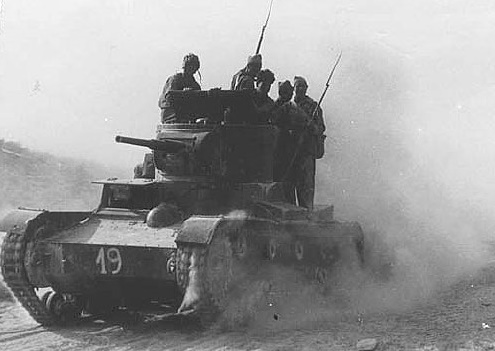 the Forerunner of the spread of the ideology of fascism on the planet, as we know, was the civil war in Spain. On one side of the scales was the rebel General Franco openly supported by Italy and Germany, and on the other the Soviet Union, secretly supporting the Republicans.

the Middle of the XX century went down in world history as the time of the armed struggle of the developed countries of the world, professing the opposite of moral principles for power on the planet. The war in Spain, which began on 18 July 1936, became one of the most important episodes of this confrontation. Officially the Soviet Union, expressing solidarity with the position of Britain, France and the United States, declared a “policy of non-interference”. In reality, immediately after the outbreak of the civil war to support the Republicans in Spain began operation of the Soviet military with the conditional name “X”. A plan of interventions was developed on 14 September 1936 by experts of the General staff of the red Army and approved by the members of the Politburo of the Central Committee of the CPSU(b) on 29 September 1936. The events in Spain, was so important to the Soviet leadership that the operation “X” by telephone from Sochi personally supervised Stalin, as evidenced by archival recordings of his telephone messages. Despite the fact that the country itself was badly in need of arms to Spain was sent about 100 tanks, “Vickers”, a foreign name which has been assigned specifically to have a Soviet factory. In fact, Spain went Patriotic T-26 tanks. For the conspiracy through Mexico also has sent more than 50 high-speed bombers with pilots. The cost of the supplied equipment, as follows from the letter to Voroshilov, Stalin was around 50 million dollars. In addition, in the framework of operation “X” in Spain but a few hundred military advisers wereabout smuggled many volunteers.

it is Noteworthy that the experience of sending to a distance of 3.5 thousand kilometers of large consignments of military equipment has significantly assisted in organising transport logistics during the great Patriotic war. Only in the period from September to November 1936 in Spain were sent to 17 cargo ships with special cargo. Subsequently to the shores of the country took another 25 Soviet ships. It is noteworthy that if the operation received the name “x”, the transport ships were designated as “Y”. During the years of the civil war in Spain to aid the Republicans from the Soviet Union left 66 “Y” – ers, loaded with 648 aircraft 400 armored vehicles, 1186 guns, 340 mortars, 20,000 machine guns and 500,000 rifles and a large quantity of ammunition. While military advisors regularly reported to Moscow that the Spanish commanders is extremely experienced in combat. The management of the fighting actually had to fight the Soviet specialists. And quite often there were contradictory situation, when the Soviet troops illegally present in Spain, at the same time orders were given Voroshilov from Moscow and the leadership of the Republicans in Spain, which contradicted each other. Military advisers had to act like “a snake in the pan” to comply with the orders of both command centers. It should be noted that the number of Soviet military personnel in Spain was quite impressive: 772 351 pilot and tanker, as well as many translators, communicators, engineers, technicians, artillerymen and sailors. In the fighting 59 of them were awarded the title Hero of the Soviet Union, while more than 200 people remained forever lie in Spanish soil.

Helping one of the parties in the civil war in Spain, the Soviet leadership pursued several goals. The most important of these was the training of Soviet soldiers to the coordinated actions during combat operations, and test real fight the latest Soviet weapons. The experience was extremely useful a few years later during the great Patriotic war. As you use tanks and aircraft during the fighting in Spain, the Soviet Union immediately sent recommendations for necessary design improvements. Unfortunately, they were made before the Second World war. In particular, were not improved cockpit of fighter I-15 and I-16. At the same time the Germans also “obratyatsya” his technique in Spain, took into account its own shortcomings and made the necessary changes in the Messerschmidt Me-109. By the end of the fighting in Spain the German aircraft could reach speeds significantly higher than similar indicators from Soviet fighters and more powerful weapons. It should be noted that the Soviet Union helped the Spanish not free. Operation “X” is generously funded by the Spaniards. USSR had brought to the state Bank of the country a substantial part of Spain’s gold reserves, which pays out deliveries of weapons and military experts. When all the gold legally became the property of the USSR, Spain was granted two loans at 70 and 100 million dollars for three years. But it is evident that the operation “X” has been extremely beneficial to the USSR from all sides.