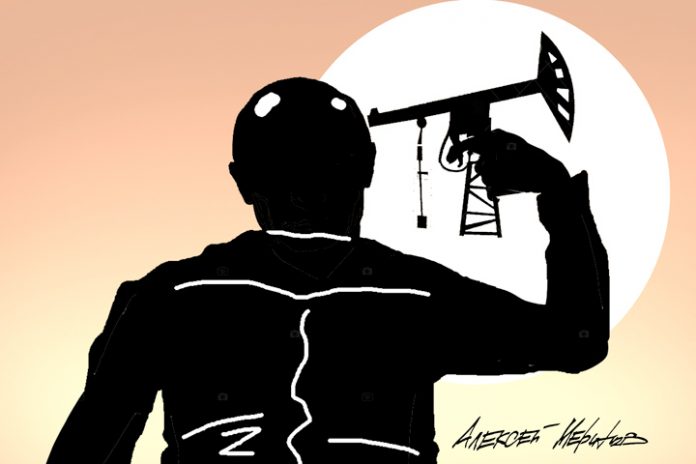 Oil is so entrenched in our lives that we sometimes do not realize its value: without oil collapses global agriculture without oil not to drive in cities food, without oil the military equipment is drawn in a simple iron. We can say that saturated with the energy of oil has accustomed mankind to the “easy life”. Today, oil is the mass of the product and the source of wealth of many countries, including Russia.

In recent decades, world oil production has barely increased. There are several reasons: the growth of outdoor oil reserves is lagging behind the rates of its production; importing countries are pursuing a policy of energy conservation and increase the use of more environmentally friendly natural gas. Output in the middle of the twentieth century on the world commodity market of new players has contributed to an overflow of the market and lower oil prices. In order to protect the prices of the countries-exporters of oil established in 1960, your organization OPEC. In 1973, OPEC used the “oil weapon”, significantly reducing production. At the same time, Saudi Arabia has completely stopped deliveries of oil to the United States, after which there was a fourfold increase in the price of a barrel. Caused by the effects of the embargo shock for a long time embraced the whole social structure of industrialized countries.

Today we are witnessing an almost similar picture: caused by the same oil weapon is economic crisis, reinforced by the surplus production and decline in world demand for raw materials due to pandemic coronavirus. It is difficult to say what guided at the beginning of March in Vienna, the Russian negotiators with Arab Ministers when he refused to reduce oil production and thus maintain prices at the level of 50 dollars per barrel. If Russia had accepted the terms of the OPEC countries+ and decreased production by 400 thousand barrels per day, up to the end of this year would have lost only $ 7 billion. The decision of the Russian oil diplomacy “do not reduce” instant caused a twofold decrease in oil prices.

as a result, this year alone, Russia’s oil exports will lose about $ 35 billion. It turned out the proverb: “went for wool and came back shorn”. Currently, Russian oil companies to the best of their capabilities of increasing production, heavily draining the bowels, and can say, nothing’s oil supply to the West. A hostile country where we pump crude oil brand “Urals”, thank you for this generous gift.

According to the Energy strategy, by 2030 Russia will produce 540 million tons of oil per year. Of these, only half is expected to process, and the second half in the form of crude oil to be exported. It turns out that our country even in the future is not going to change the structure of the commodity economy. For many years we hear the mantra: “Russia needs to come off the raw needle”. Indeed, to sell crude oil of more than 200 million t a year is wasteful and stupid. 140 years ago the founder of the Russian oil refining Viktor Ragozin said: “the Export outside the country of oil is equivalent to the deliberate ruin of the country, taking away the earnings of the Russian people”.

unfortunately, the Russian exporting resources in raw form is growing from year to year: crude oil, natural gas, timber, logs, aluminium and Nickel in ingots, rough diamonds. While the proceeds of capital, usually flowing into Western banks. Russia has become the world’s supplier of raw materials and financial capital. Such squandering doesn’t make us look when the wealth of Russian mineral resources do not find employment at Home.

And yet we can come off the raw needle, not substituting under blow to Russia’s interests. It seems that we don’t need to produce oil more than 500 million tons/year, and gas — more than 600 billion tons/year. Reasonable quotas on production, as do Arabian monarchy. Indeed, why are we rapidly Deplete our mineral resources in order to satisfy the hydrocarbon appetites of the West? Makes a lot of sense “not to use notes”, and to rapidly develop the petrochemical industry. Deep processing of oil is the most sensible strategy! Oil in integrated processing gives rise to a class of products, income from which exceeds the cost of the oil. For example, the export shipment of high value added products obtained from the 4 million tons of oil, allows to gain the same amount of currency as the export 24 million tons of crude oil.

the License for subsoil use shall contain a clause, binding to process a major share of crude oil in synthetic fiber, rubber, mineral fertilizers, plastic. In the mining license, it is necessary to indicate the preferential use of domestic appliances. It will revive our machinery, and it lived up to what in China, buy drilling rigs. Photographs taken at night by satellite, is seen as Western Siberia is illuminated by burning torches of associated petroleum gas, which is burned up to 20 billion cubic meters per year. This is a direct economic and environmental damage! Here priority should be to invest.

Such an approach would not only create millions of needed jobs, but also radically improve the environmental situation. In recognition of the Ministry of natural resources, in Russia there is no mining company in the fields of which everything is done in accordance with environmental legislation. The Ob river each year makes in the Kara sea up to half a million tons of oil products. For every 5 km of the route field pipelines have one accidental release per year, because the company timely update of the old pipe. On-site fishing typical oil content reaches two tons per hectare. In Western Siberia there are more than 5 thousand Unliquidated sludge pits. While profit is privatized, and the damage from pollution is responsible for all Russian society and the Russian nature. I remember Indian wisdom: nature is not what we received from the ancestors, and the fact that we are in debt to our descendants.

as a positive example, called the start-up oil company “Rosneft” Tuapse Europe’s largest installation for deep processing of oil, as well ase a start-up company “Tatneft” modern petrochemical complex “TANECO”. If our country is to build 15-20 of these plants, the Russian budget will receive surplus value, is 5-8 times greater than the export price of crude oil. Then the country’s budget will not depend on the vagaries of the world economy and the Russian ruble will cease to be “wooden” and return to the level of 30 rubles per dollar.

Norway annually produces 100 million tons of oil. In the North country on oil revenues provision of free education and medicine, housing and communal services, high pensions and benefits the poor. Moreover, this Northern country supplies Europe with cherries and strawberries. There are 200 thousand farms fully provide its citizens with meat and dairy products. As you can see, the country may not be the “oil curse” if the authorities are the people who know how to dispose of natural wealth given from the above.

Oil has always been a popular product: today it is produced in nearly 100 countries around the world. It has been almost 40 years since futures contracts have undermined the power of OPEC in the field of pricing of crude oil. Currently, the price of oil is set instantly on the open market in the trading hall of the exchange. Ahead of oil production and reduced demand for this product in the world infected with the coronavirus led to a glut in the world oil market. Some companies to get rid of oil, are forced to sell it at a negative price. In this situation, only coordinated actions of OPEC member countries+ would not to bring down the price of oil. However, this did not happen, resulting in the Russian oil sector leaves the budget without a lot of money, and its depths without a lot of oil.