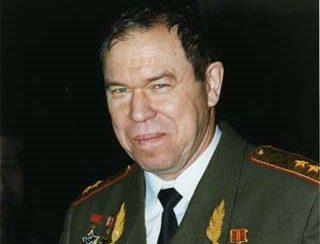 Lieutenant General L. Rokhlin, Y. during the war in the Chechen Republic had its own way to manage entrusted to him the unit in a combat situation, he often showed independence, defying the orders of the higher command, and the result was worth it.

Rokhlin in Chechnya two months he commanded the 8th guards army corps, participating in the end of December 1994 assault on Grozny. As told himself Lev (his memoirs published in the book “Lev Rokhlin: the life and death of General” writer Andrey Antipov), the capture of the Chechen capital, he undertook a workaround: one of the regiments of the corps seized and held the bridge over the river Oil industry, and the main force moved into the area of the Russian cemetery in Grozny.

the Minute the tide of battle corps Rokhlin recorded in “worksheet for task force command and control center” of this unit. Lev said that the hardest thing in war is to thoroughly develop a strategy for future battles, all the calculate and take into account.

Rokhlin argued with the commander of the joint group of Russian troops in Chechnya A.V. Kvashnin regarding the appropriateness of the placement of the forward command post of the Northern group in Tolstoy-Yurt, as it was believed that he had to be behind the battle formations of troops. The General also repeatedly drew attention to the lack of combat training of troops participating in combat. Obstinate temper Rokhlin did not like many superior commanders.

according to Alexander Antipov, Rokhlin preferred to every platoon commander had a clear idea of the aims and objectives of their unit to the upcoming operation, otherwise the success she will achieve. Corps under the command of General had entered Grozny very carefully in the city, according to Rokhlin, previously carefully studied, each busy abroad strengthened the roadblock. However, the Minister of defence Pavel Grachev, the commander hurried, demanded to accelerate the pace of advance.

During the storming of Grozny suffered heavy losses 131st separate motorized rifle brigade, which, as claimed by L. Y. Rokhlin, don’t even set the fighting tasks. Lev stated that the capture of the city was organized bad, between the troops was not consistency, and subsequently this has resulted in the death of a large number of soldiers and loss of military equipment. Rokhlin’s reconnaissance battalion was unable to break through to the location of the 131st brigade, then the General put the blame.

the night of December 31, corps General was the only unit of the Russian troops, who managed to approach the center of Grozny and to gain a foothold. According to the testimony of Rokhlin, the higher command had no reliable information about the readiness of the militants and underestimating their power. As then calculated, for each Russian soldier had up to a dozen fighters, Aslan Maskhadov. Rokhlin claimed that his body is not broke just because he was in no hurry to carry out orders of the higher command and was received at its discretion, consistent with the current combat situation.

the Assault on Palace Dudayev

In a TV interview L. Y. Rokhlin recalled that in the battle for the Presidential Palace, our aircraft attacked, which killed Russian soldiers stationed in the building of the Council of Ministers. Before the seizure of the Palace Rokhlin spoke with Maskhadov and offered him to surrender. The General has rejected proposals by the command to bomb the Palace from planes and shot from the tanks, he insisted on his assault razvedrota. Then without loss of its body occupied the area Minute. Later the city was abandoned by our troops, that Rokhlin called for outright betrayal on the part of the command.

In February 1995, the corps L. Y. Rokhlin returned to place of dislocation in Volgograd. Lev began dobivatSya representation of its soldiers and officers to the awards – this process was hampered in every possible way upstairs. The General of the title of Hero of Russia that they were about to give, refused, saying that the civil war generals to such awards is unacceptable.