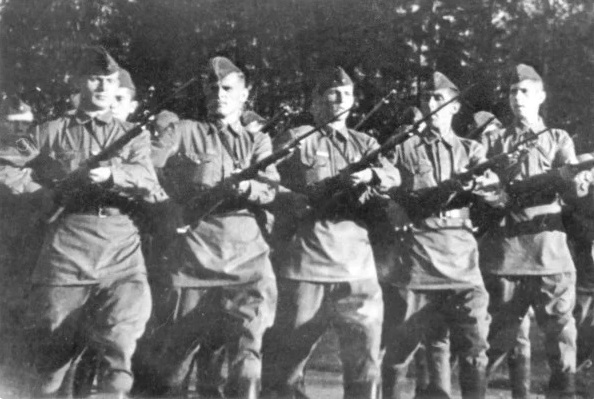 About the feat of Podolsk cadets is much written in books and shown in different films. As is often the case in descriptions of the different events of the great Patriotic war of information seems to be a lot, but it is controversial and vague. Briefly, it all comes down to the following. The Podolsk cadets detachment numbering about 2,500 people, poorly armed and had only two 45-mm guns (according to other versions were also some very ancient, almost from the Museum, guns), more than a week kept the defense on the direction of Maloyaroslavets, confronted with greatly superior forces of the Wehrmacht, in particular, the 19th Panzer division. The students who were 18-19 years old (all boys), destroyed hundreds of German tanks and several thousand soldiers of the Wehrmacht, but they almost all died. With their lives they arrested the Germans and won the time to prepare for defense.

In all the presentations of the Soviet time, and repeat now, as usual, there were few real facts and a lot was speculation.

After the red Army came in Vyazemsky boiler, to the front was thrown (in particular) and cadets of military schools. In the Podolsk infantry school at that time was about 2000 students, in the Podolsk artillery is about 1,500.

5 October was formed a detachment of infantry company of Podolsk infantry and artillery battalions (battery of 45-mm and a battery of 76-mm guns) Podolsk artillery school. The unit was sent to the area of Yukhnov, where he entered the squad captain Starchak (430 saboteurs, trained to be dropped behind German lines). Later there were sent two companies Podolsk infantry school. A detachment operated as part of the 17th armored brigade, also jointly fought with them some more units.

the SS Division “Reich” 5th Oct took Yukhnov, but instead to strike at Maloyaroslavets, the road was actually open, turned North to Gzhatsk. This allowed the troops of the 43rd army to organize the defense, relying on the 37th Maloyaroslavets fortified area. The main fighting took place to ensure the combat area, which overlaps the Warsaw highway on the approaches to Maloyaroslavets.

For action in this area, according to the combat and numerical composition of the Soviet army in 1941-1945, and the help of the staff of the Western front from 14.10.41 were concentrated (except for the consolidated units Podolsky schools) the following parts and connections: 312-I and 110th infantry divisions, fully equipped, 108th reserve infantry regiment, and two separate machine-gun battalion, a company of cadets of the Moscow VPU, three RGK howitzer regiment and a rocket artillery regiment, a separate artillery battalion of 76 mm guns, four anti-tank artillery regiment, seven separate flamethrower mouth. Armed with the 37th Cheers was 70 76.2 mm guns in 1900 and 5 75-mm French guns.

In the course of these events took place on the episode when in one battle was immediately destroyed 14 German tanks, which saved a lot of documentary evidence, including a lot of pictures. 16th Oct battle group 19th Panzer division tried to go to the rear of the Soviet positions, but came under fire from 85 mm anti-aircraft guns that made up the main armament of anti-tank regiments of artillery. Of 15 tanks, only one survived. Usually the destruction of these tanks is credited Podolsk cadets, but the majority of German machines destroyed artillery of the 85-mm guns, which the cadets were not.

Despite their small numbers compared to other troops of the 43rd army, who fought on this front, a detachment of Podolsk cadets has played an important role. The cadets were well-trained, have all had the experience of military service in the army, mainly the age of the fighters was 23-25 years. In fact they were a luxury, especially in comparison with other compounds. For example, the soldiers of the 312th infantry division, at the site which were of Podolsk cadets, not only had no training, but a significant part of them didn’t even know the Russian language (the division was formed in Kazakhstan). As a result, this division suffered huge losses. Was connection, even worse show itself, for example, advanced to Maloyaroslavets 53rd infantry division and the 17th division of the national militia. In a report to the commander of the 43rd army said: “the Infantry of these divisions fled under the onslaught of a battalion of infantry and a few tanks. I think that the 17th and the 53rd division demoralized, and the perpetrators should be brought to justice. Unit boom shoot all fleeing from the battlefield.”

Nothing similar about Podolsk cadets not mentioned in military documents, on the contrary all States that they fought bravely and competently.

Accurate data on the losses of the cadets of both schools never published, called the numbers 2,500 and 3,500 casualties, and that had survived only 500 students, based on nothing. The total number of consolidated units, according to the documents, does not exceed two thousand people. Died not all fought in the 37th fortified, since, according to the combat reports preserved, notwithstanding heavy losses, the fighting capacity of a summary froma number retreated to the line of the river Nara. After surviving the fighting cadets were withdrawn in Ivanovo oblast, where it created a new shuyskoe infantry school. Podolskoye artillery school was evacuated to Uzbekistan.