Home Entertainment As police struggle with the violators of the quarantine: sticks, paint on... 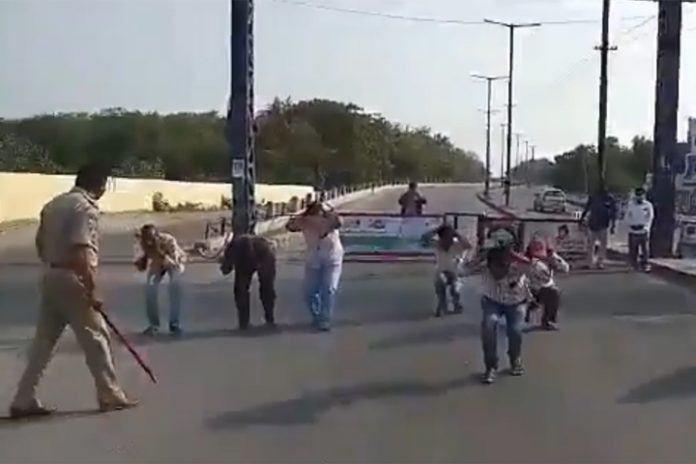 Obviously, the new quarantine rules in Moscow and the Moscow region is addressed primarily to those who chose to use a “long weekend” in order to spend leisure time in the company of friends or in a public place. For example, in India, where the locals initially ignored the introduction of the universal regime of self-isolation.

People went to the markets, thousands of people continued to work in the construction industry. In this situation, the authorities went to extraordinary police measures. The police got the authority to severely punish all violators of the quarantine.

In several Indian States introduced a system of “branding” offenders – it on his forehead leave point indelibly. However, this measure led to abuses. According to local media, police began to leave on the faces of the detainees abusive inscriptions.

Such measures, however, are not only used in India. In the web you can see a video which the police of Spain engaged in the whipping of offenders. In Spain, together with Italy, the epidemiological situation is one of the worst in Europe.

In India, the main source of information about violations of the sanitary regime are the locals. There has launched a social media campaign on public awareness of police officers. Typically, the Network published photo or video of the violators, specifying the time and place of the crime.

In more technologically advanced countries, the police went even further. According to the Washington Examiner, in the US, police began patrolling the city streets with the aid of drones equipped with facial recognition.

In California, police drones is additionally equipped with speakers and night vision devices. Assoobshaet edition, citing police officers, the task of the drone is to find a group of offenders and to encourage her to leave. In the most serious cases, the police use drones spraying tear gas.

Another “smart” way of tracking actively adopting police structures in Israel. In fact, every mobile phone in the country turned into a tracking device that sends a report about the presence of the owner, thanks to geolocation functions. The police know where in spite of the ban going group of people. This address leaves the police.

law enforcement authorities in Russia until recently in dealing with violators of the quarantine restrictions were limited mainly to preventive conversations and distribution of information material. What measures they will adopt in connection with the tightening of quarantine measures, time will tell.

Watch the video on the topic: “the Inhabitant of China gave the advice for the coronavirus: “the Clothes on the balcony!”” 18:19