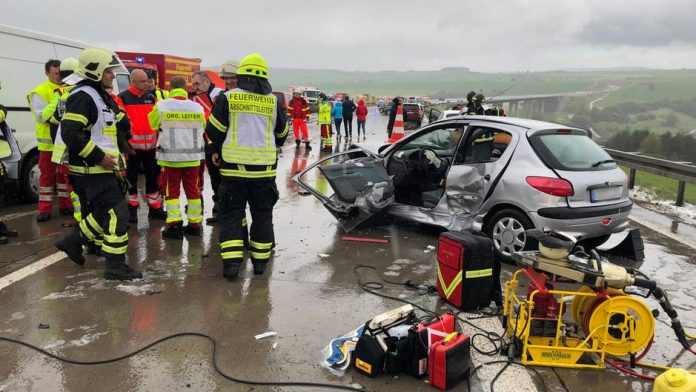 In the event of accidents on motorways in Thuringia, Bavaria and Saxony-Anhalt came on the weekend, two people were killed and more than 35 have been injured. The most serious accident happened on Sunday afternoon on the A71 in the German state of Thuringia. There are two people died, the police announced. Six vehicles were involved in the accident between Sömmerda and Erfurt. A vehicle went up in flames. There are also four slightly injured, a spokesman said.

In the case of a pile-up 25 people on a Sunday afternoon on the A71 in the South of Thuringia have been injured, four of them seriously. In the event of ice and hail drove between Suhl and Meiningen on the roadway in the direction of 50 cars into each other in Schweinfurt, according to police. On the opposite lane, there was another accident with five cars. The A71 was closed between Meiningen and Suhl for several hours in both directions.

In the case of freezing, there was also on the A7, close to Nesselwang in Bavaria within a few minutes several accidents. As the police announced, were injured on Sunday evening, two people and ten vehicles destroyed. The damage amounts to around 100 000 Euro. Trigger two cars that were separated come apart on the smooth highway into a Skid. After that, it came in both directions of travel to further accidents.

In a pileup on the A2 were close to Bornstedt, Saxony-Anhalt, six people were injured. According to police sources, five vehicles collided early Sunday. Trigger a rear-end collision in heavy traffic on the A2 was here. The injured came in for treatment in a clinic.