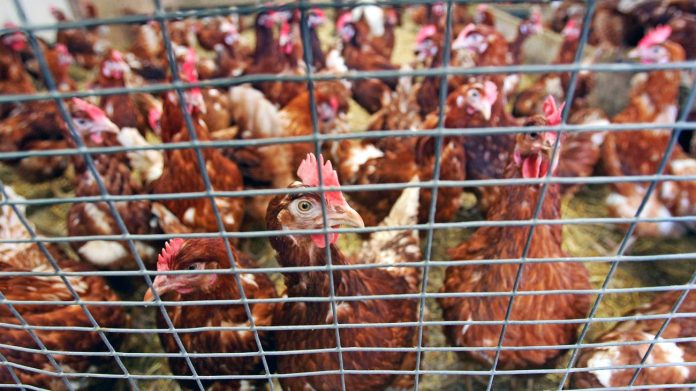 dozens of farms in Germany appear to have been with contaminated poultry feed supplies. Especially in lower Saxony and North Rhine-Westphalia, therefore, as a precaution, many businesses locked. Alone in North Rhine-Westphalia, 41 farms were affected, said a spokeswoman for the state office for nature, environment and consumer protection (Lanuv). Also, the lower Saxony Ministry of agriculture reported more than 27 farms affected. A court has been locked in Saxony-Anhalt, Brandenburg and Thuringia.

Already in October, we had veterinarians for routine checks in a mast measured operating in the County of Paderborn conspicuous values, in the case of a poultry meat sample: In the fat tissue of the animal they had found too high values of toxic PCB mixture. It is now clear that, nationwide, several Hundred tons of PCB-contaminated poultry feed are in circulation.

According to information from the North Rhine-Westphalian land office, it is in the case of PCBS (polychlorinated biphenyls) toxic substances. An acute health hazard is not according to the authorities of the impacted products. A Veterinarian from the district of Paderborn said, the detected PCB values were in the nanogram range: “roughly The size of a sugar cube in lake Constance,” it said in a statement.

“Who charged products is eating, not sick,” said the spokesperson of the Lanuv. The mixture of substances but in the body and in nature is very difficult to degrade. “That’s why we want in no case that the substances enter the Food chain,” it said. Contaminated poultry and eggs were withdrawn from circulation, before they got in the trade. This could go on for large amounts: Alone in an operation in the lower Saxony Nienburg, for example, were found to be at 4,000 turkeys exceeded maximum values.

dates back to Several Hundred tons of poultry feed in circulation

The contaminated feed from the feed manufacturers, Air conditioning. According to the information of the lower Saxony agriculture Ministry was chipped in two loading cells in a branch in Minden in East Westphalia lacquer. In this case, the poultry feed was contaminated.

the Total came to several Hundred tons of poultry feed in circulation. The company confirmed to the German press Agency. Of the company, they said they regret the incident. Already delivered goods had been destroyed, replaced with safe food, contaminated food. The affected loading cells would not currently used by a reviewer examines. “As soon as possible remediation will be prepared,” it said. Was affected but only a small part of the total production at the site.

The lower Saxony agriculture Minister Barbara Otte-Kinast (CDU) informed the state Parliament in Hanover over the case. Thus, lower Saxony is at the 2. November, in North Rhine-Westphalia had been informed that in the investigation of a broiler sample Exceeded the Maximum level established. Only seven days later, the authorities from the neighboring country had reports more, feed deliveries to farms affected. “This has increased the total number of affected farms in lower Saxony,” said Otte-Kinast.