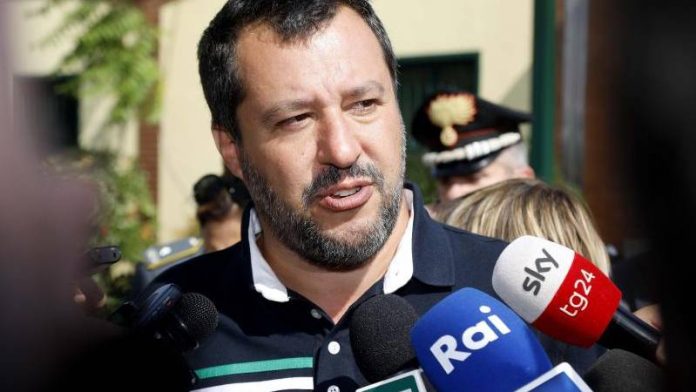 In Europe, announces a new tough struggle for dozens in the Mediterranean sea rescued migrants. Around 130 people have been stuck on a ship of the Italian coast guard.

The government in Rome wants to let the Land go, when their distribution is resolved to other EU countries. Meanwhile, the balance of a new boat drama intensified off the coast of Libya. According to the aid organization red Crescent, it could have up to 200 people cost the lives of.

The Italian coast guard had taken, according to the Ministry of the interior, in the night of Friday, 135 migrants, which was previously an Italian fishing boat had helped. In the night of Sunday, the “Gregoretti put” in the port of the Sicilian city of Augusta, as the Italian transport Minister, Danilo Toninelli said. “The EU must now answer, because the question of immigration goes to the whole continent.”

On Saturday could only leave a Pregnant woman with her husband and two children to the ship, the interior Ministry said. The case of the “Gregoretti” is reminiscent of the coast guard vessel “Diciotti” last summer. On Board 177 migrants were a majority of the Refugees were forbidden to Minister Matteo Salvini at the time, almost a week to go to the country. The head of the right-wing Lega for its rigorous Anti-immigration policy. Since his arrival, the rescue ships are always blocked with migrants on Board in the Mediterranean sea. Particularly hard Italy takes action against private Maritime search and rescue.

Pope Francis called on the international community before the faithful in St Peter’s square, to act quickly and decisively in order to prevent tragedies in the Mediterranean sea. He reacted shocked on probably the most serious boat accident in the current year. 67 bodies had yet been recovered, said Osama al-Fadhili, head of the Red Crescent in the port city of Al-Chums, the German press Agency on Saturday. 138 people were still missing.

The accident had happened last week, about five kilometers from the Libyan coast. Al-Fadhili, according to the 360 people were aboard a boat that was broken in the attempt to travel to Europe in two parts. 160 of the occupants had been rescued. The exact number of victims could probably only find if the corpses had been washed up on the coast.

in Terms of the number of Missing there was conflicting information. The Libyan coast guard that were missing after the disaster, 115 migrants. The International organization for Migration (IOM) and the UN refugee Agency (UNHCR) spoke of some 150 Missing. According to Libyan coast guard 250 people were on Board.

In the Mediterranean sea died this year, the IOM suggested that 686 people, more than 400 of them in the Central Mediterranean between Libya and Italy. The escape route is considered to be the most dangerous in the world. Private Maritime search and rescue not currently in the Search – and-rescue zone in Libya on the way. The ship of the German aid organization, the Sea-Eye, the “Alan Kurdi”, but on the way there. On Sunday the ship North was located to the West of Lampedusa.

Reuters topics in this article, migrants, Mediterranean sea, Europe, ship, boat, drama, Italy, Libya, EU Augusta, Tripoli, red Crescent, Rome Ministry of the interior Danilo Toninelli Moscow police took a New policy, More than 1000 solid beat on protesters – the call: “Putin resign” display star travel worlds Sicily in the spring with flight and half Board from € 899,- took hundreds of anger in Russia: the truth behind the mass demonstrations in Moscow, DPA +++ Trump-Ticker +++ attack on politicians from Baltimore, “disgusting, rat infested shit-hole”: Congressman Trumps back to experiencing the full wrath AFP-climate change Why we Tweet hands away from meatballs and Ikea-Fans of ASAP Rocky call to Sweden – rotates without prohibitions no longer Idlib are living with Three children struggling to Survive: A photo shows the misery of war in Syria, AFP To Trump-Boycott to AFP the death penalty in the USA Trump the clock: USA re-executions at the Federal level, from Niels Kruse Bizarre Tweet heat wave in the USA – but Melania Christmas is already in front Of Florian Saul Under a false seals such As a “stupid joke” the perfect Protest against Donald Trump Dieter Hoß Gymnasium in Leonberg Neuntklässer Nazi symbols via Whatsapp, head of the school to send the play stunned 40 new Levels Mahjong – for free Now! Play Facebook-Post-FPÖ youth advertises for pork cutlet – with a picture of fish fillet British Prime Minister is in election campaign mode, What Boris Johnson really want? There’s a theory … “Not the most urgent question of” in Spite of hundreds of thousands of domestic flights of officials: Green-chief Habeck ministries defended in Bonn AFP To Trump Initiative, U.S. Federal authorities to allow the re-Hinrich incident sightings in the Strait of Kerch On the Danube: Ukraine puts Russian Tanker fixed Broken rails, dilapidated bridges, the railway plans restoration offensive – for 86 billion euros, DPA