Home Breaking False pages of Facebook in favor of PP spend up to €... 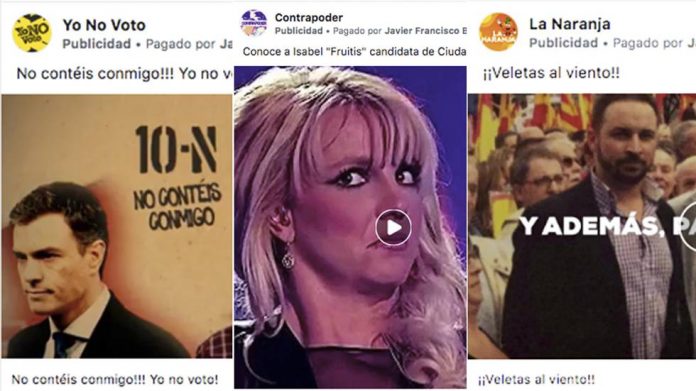 An obscure plot of nine pages has paid up to 40,000 euros to make political advertising on Facebook since the municipal elections. Your ads are critical of the PSOE, Citizens, Vox, and United we Can and in their titles include references to some of these parties and to promote abstention: Retrieve the PSOE, With Rivera, Not The Orange, countervailing power, or I don’t vote. Among the 59 ads have added close to nine million views. The manager of eight of these pages is a young man from Murcia, Javier Ager Solano, whose Twitter account is full of positive references to the PP. The eight pages controlled are suspended from a few days ago, shortly after this newspaper contacted him.

In two of those pages, Retrieve the PSOE and counter-power, there are ads paid for Javier Francisco Barralo Vicente, which has no reference with that name on the Internet. The e-mail that uses Barralo on Facebook belongs to the domain of another page that is allegedly linked with the network called Association for the Defense of the Interests of Spain (Adies).

The Party denies knowing nothing of all this: “we do Not have knowledge. We will not do advertising on the networks until the start of the campaign. You’ll have to speak with its authors,” say sources in the party, without explaining where you may have taken out so much money a “follower” as Ager. Barralo has not responded to contacts by e-mail or Ager to two messages on LinkedIn and Twitter.

Adies is registered in the register of the Ministry of the Interior in a direction of Madrid, dated September 30, 2019, months after I have started to pay for advertising on Facebook. The ads on your page, which has changed three times of looking at Facebook in a few weeks, messages appear on all of the PP, one of Vox and critical Citizens, the PSOE and the independence. Some of their messages will also be distributed by Instagram, network, property of Facebook.

The ads are a mix of aggressive advertising with news that favor a line near the PP. Pedro Sánchez and Albert Rivera are the two politicians who are more critical, receive. Rivera is called “weather vane”, “turncoat” or are you related to Groucho Marx (“if you don’t like these principles, I have others”, says one of the ads with the picture of Groucho Marx after a speech of Rivera).

The page I did not vote managed by Ager has versions abstention of United we Can, PSOE and Citizens. In all cases, including Albert Rivera, the music that sounds while painting a graffiti that says “10-N Don’t tell me” is the famous song of partisan Italian Bella ciao.

This Wednesday the journal.is running a campaign titled I with Íñigo where he encourages abstention with the same graphics and the same song Bella ciao the page I do not vote, managed by Ager. I with Iñigo is managed by Joseph Lanuza, an employee of the consultant Sanmartin Politics, says the journal.is that what do with your money and personal capacity. Aleix Sanmartín worked on the campaign that made president Juanma Moreno in Andalusia, and now has signed for the Paul Married in face of the general.

In the page to Retrieve the PSOE also there is a video with screenshots of the news about the mayor of Móstoles, Noelia Posse, which carries the message “¡¡So not!! ¡¡Don’t tell me!!” and concludes with a “10-N Don’t tell me” also with the same resource graph that the videos on the site I do not vote.

A representative of Adies responded by telephone to questions from this newspaper: “it is Not a question of party. Will any ad with people of Vox. We did not ask for the vote to anyone,” says Manuel Onrubia, computer for 41 years and was a member of Adies. How many members has the association? “Undetermined,” she responded. The members are the ones who pay for the ads, according to Onrubia, who confirmed that Barralo is one of the partners.

About how or where they met the members of the association, Onrubia does not give any detail, beyond phrases to diffuse: “it has No mystical origin. We have come to know and we have been growing modestly. We are all who have wanted to be,” he says. Nor does it seem to have a lot of forward growth in members: “if you want to contact us, we can see”, he says. And that the work of the association on Facebook going for long: “it is Not something linked to the elections. We want to have campaigns permanently. It will continue because there are many topics that are going to continue to be concerned about the people: Catalonia, Brexit”, he adds. A later message to clarify the possible relationship between Ager and Barralo, did not respond.

in Addition to the coincidence of two administrators, there are ads equal between those paid for by Ager, Barralo and Adies. Counter-power, which is a reference to an ideology closer to United we Can, and Adies published both the same video about Pedro Sanchez with a title similar to: What kind of Pedro Sánchez are today? In the images out statements without contextualizing of the president in the functions where it seems to be a contradiction.

The page of Adies has also paid at least four media ads in Andalusia. Are news against the PSOE regional about an alleged purchase of votes, or about how they have inflated the statistics of vaccination. None of the two cases has a lot to do with the interests of Spain.

After receiving several questions from this newspaper, Facebook opened an internal investigation which, after several days had yet to be completed: “Thank you for calling our attention to this. What we are investigating,” said a spokesperson for the social network. All information about the directors, the investment and the type of ad is preserved in the Library of the Ads of Facebook, despite the fact that the pages have been deleted or suspended.

The pages also had activity linked to the local elections in may. In a video clearly outsmarted, he speaks about the “three questions to which Aguado does not want to confront,” on the inheritance tax, possible pacts with the left and “if you are going to let the left destroy Madrid”. In fragments cleaved, Aguado responds to what the authors of the ad they want, but not what he actually said. It is a example crude fake news that were between 200,000 and 500,000 users of Facebook in Madrid.

All pages are of recent creation, unless a: I will Not eat octopus if Spain wins the world!, created in the summer of 2010, shortly before Spain won the World cup. The name is a reference to the octopus Paul. This page alone has spent about 30,000 euros between the campaign of the city until 25 September, when it was called the November elections. At that stage no one appears as administrador. Ager has been assumed to be the visible face of I will Not eat octopus and already with his name, page has released five ads with € 1,000 spending. The other seven pages of Ager have been launched from September 25, 18 ads of up to 5,000 euros of investment.

Next to announcements about national affairs, appear specific interests murcia, as a link to this news in the newspaper The Truth: “A report discards discharges into the Mar Menor before the episode of mass mortality of fish.” Two of the pages, with less weight of Ager are called and United by the Mar Menor and Murcia to the Day.

When Facebook starts to block the advertising socio-political issues without information of the administrator, is when a page that wants to advertise should come to light. It is therefore extremely likely that these pages will participate in the elections in andalusia or in the April general under the protection of anonymity.

In September, Facebook announced from its headquarters in California, which had suspended 100 accounts of Facebook and Instagram linked to the Popular Party. Some of these sites had invested in advertising to promote them: “despite the fact that the people behind this activity were to hide their identity, our investigation found links to individuals associated with the Partido Popular”, said a company release. “While the greater part of the activity [of the pages] was focused on amplifying the content of others, some of the owners of the accounts published on local and national news and issues related to elections, the Popular Party and criticism of opponents”, he added.