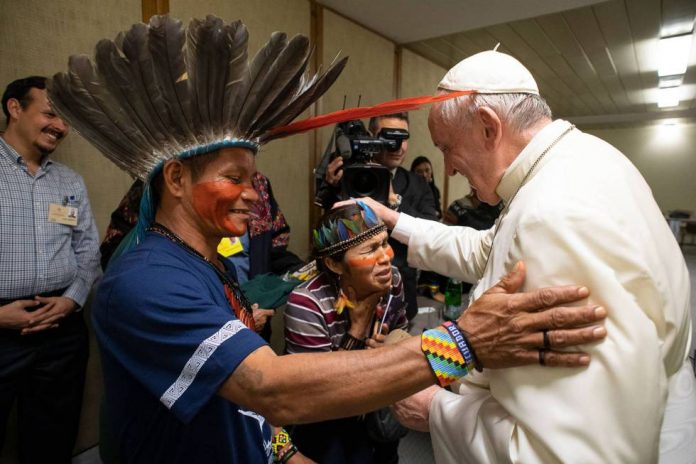 Something has changed in the Church: for the first time in a synod has spoken explicitly of women, and what is more, the need to find a way to recognize the commitment made by them in the evangelization of the Amazon. Naturally, the application -more than legitimate – have the right to vote is presented by the nuns who have participated in the synodal assembly, has not received a reply, and the question of the recognition of the diaconate to women, dragged from years ago, it has been referred once more to a new commission.

But they first addressed the problem, which is considered closely linked to the amazonian context, the fundamental role played by women in two-thirds of the christian communities, despite the fact that have been devised contradictory solutions. In the first place, to recognize these women with two minor orders, such as the offices of lector and acolyte, which do indeed carry practicing from decades ago; but, above all, to create a new ministry, the “Community Guide”. This last proposal would be fine if it were accompanied by a campaign of nagging about the need to increase the number of priests, a necessity deemed so urgent as to justify even the proposal of ordaining married men.

If one were to accept this proposal and really significantly increasing the number of priests, the women currently lead the communities, even though they recognized the new special ministry, they would lose their role for the benefit of the priest, because the Church does not acknowledge the equality between women and men, and much less between the laity and the clergy; the superiority of the priest, as such, remain unquestioned. We are very far from acknowledging any christian, man or woman, as the subject of the priesthood given by baptism, and for this reason, worthy to play a role of a guide, provided that it has the capacity to do so.

In a way, therefore, the possibility of ordaining married men can become, in fact, in another way of denying the authority of women, not to recognize the great work that you have done, and not even the effort invested in the work of evangelization.

The synod amazon has brought to light a fundamental question, the delay of the ecclesiastical institution to recognize the dignity of women, which has reached levels truly serious, such as denying them the right to vote in an assembly of which they formed part, and in which it has been continually spoken of synodal process, that is to say, in common. But, of course, the proposal of a common path is directed to only men, preferably priests. Nothing has been done to counteract the clericalization of the Church that pope Francis denounces with so much frequency.

And even when you think about a new recognition, such as the Ministry of guiding the Community, it immediately looks for a way to remove women the opportunity to play a leadership role, although they have conquered on the ground, as in this case.

in Addition, there is still a great vagueness: each new project seems to refer only to the Amazon, and its problems are so special. But it is not only this enormous territory, which laments the lack of priests and claimed the role played by women, and it is clear that each of these measures will be extended to the whole Church. But how can a synod for the particular, dedicated to a part of the world’s exploited and marginalized, to become the model changes so decisive?