Home Breaking Hell 1953: what happened in Ulan-Ude after the Amnesty Beria 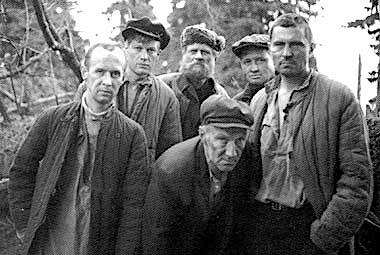 the Capital of Buryat-Mongolian ASSR (now Republic of Buryatia) became a transit hub for criminals released from the camps in the result of Beria’s Amnesty. In the summer of 1953 in Ulan-Ude dramatically increased the number of grave and especially grave crimes committed by former prisoners.

the First “thaw” after Stalin’s funeral

Mass Amnesty of prisoners that began in the spring of 1953, was initiated by Lavrenty Beria, after the death of Joseph Stalin less than a month. The corresponding decree was adopted by the Presidium of the Supreme Soviet of the USSR and dealt with more than a million prisoners, mainly those whose sentence was less than five years. Under this category fall and especially dangerous criminals, for various reasons, were sentenced to short terms of imprisonment.

According to the memoirs of witnesses of these events, honored lawyer of the Russian Federation N. N. Korchevoi, Ulan-Ude in the spring and summer of 1953 became a kind of transit point for thousands of amnestied released from Kolyma, Magadan camps and places of detention, located in the North of modern China (in Inner Mongolia). In the Mongol camps were serving their sentence the most dangerous criminals, for whom the capital of Buryat-Mongolian ASSR was the first major Soviet city on the way home.
As told Nadezhda Nikolaevna, due to the influx of “criminal elements” in Ulan-Ude in June 1953, sharply increased the level of crime. State institutions were transferred to the barracks. The Ministry of justice building, where he worked for N. N. Kursheva, was guarded machine gunners, the Windows of the rooms of the first floor was filled with sand bags. People were afraid to walk through the city, because the bandits kill and Rob everyone. In Ulan-Ude for a few days amnestied emptied almost all the shops andchki catering, they organized mass rape in factory dormitories, at the slightest resistance was strangled and cut people all that came to hand.

the Usual police measures to overcome the barrage of crime that swept the capital of Buryat-Mongolian Autonomous Soviet socialist Republic, was impossible, and the city authorities were aware that we were not ready for such developments. In Ulan-Ude hastily tossed soldiers of located in nearby towns and military units. At that time, the USSR acted a decree banning the execution of criminals, but in this case it had to be ignored in Ulan-Ude in the early summer of 1953, the military and the police received the order to kill amnestied on the spot and during the Commission of their crimes.
With 22 and up to 6 hours in the city was under curfew, and the patrol was able to shoot any passer-by if he was not in a military or police uniform. Orders were to shoot cars, if the driver did not stop on demand.
the Case of Ulan-Ude encouraged to review the provisions of the decree on Amnesty. Since July 1953, it did not apply to persons convicted of robbery, repeat offenders and hard-core hooligans. Through the year the death penalty was re-introduced for murderers who commit their crimes on purpose.
All documents relating to events in Ulan-Ude early summer of 1953, still classified, so it is unknown how many and what crimes, if this city was committed, the number of victims and executed criminals is also not disclosed.