Home Breaking How he fought under ground in the Great Patriotic 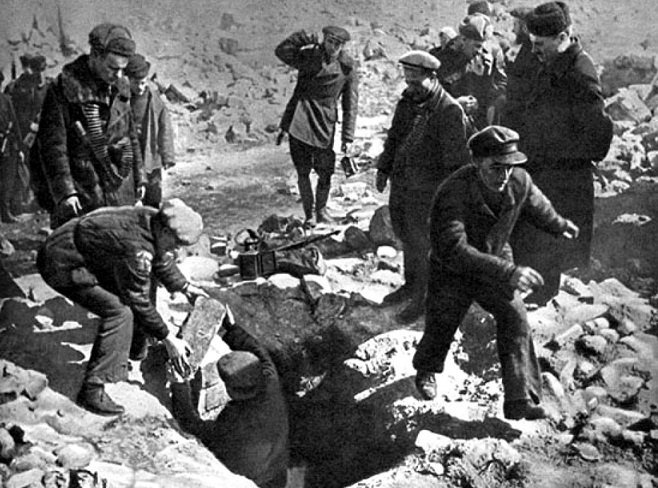 History 18/03/20 fought under ground in the Great Patriotic

the Fact that you can fight not only on land, sea and air, but under ground people have understood for a long time. Even in ancient times, the troops used the catacombs, galleries and caves in order to hide from the enemy and replenish the supply. Everywhere, destruction and burning of the walls in the capture of cities was used by a tunnel.

Sapa and the trenches

If you remember our history, a huge role in the assault of Ivan the Terrible of Kazan in 1552 was played by miners running Litvin of Rozmysl (Erasmus) and the English Butler. They did dig under the wall, laid the barrels of gunpowder. Explosions of powder charges destroyed the wells feeding the city with water. In the end, that blasting contributed to the demoralization of the Kazan army, which was unprepared for such a massive and planned attack.

in the early twentieth century the underground war is largely decided the outcome of the First world war and Russo-Japanese wars, when troops started to use mines deep dive. The experience of these conflicts clearly showed the need to develop special equipment for the construction of shafts, galleries and Sapov. During the First world war was recorded 40 ground attacks, the most famous of which was the attack of the Russian troops under Ilukste in 1916.

During the Second world war, the underground space developed not less active than land and air. So, the allies used the famous underground fortifications of the Maginot line. An extensive network of defensive structures, which housed the ammunition stores, weapon points, power plants and communication centers had special underground road, which, with the assistance of trains and supplies of the troops. Was also built entire underground fortress. The largest of them can be called a six-story fortress of Metz, depth in the ground for 50 meters and has an area of two with a half a square kilometer.
However, admittedly, the underground fortress was not justified. Lock outs, the deprivation of underground facilities ventilation quickly turned the outposts in the vast grave in which staff found themselves literally walled in.
greater efficiency was achieved in the catacomb war. The most famous are Odessa catacombs. They are up to the present day recognized as the longest artificial underground network in the world. Their length is two and a half thousand kilometers. They were used during the guerrilla war. Complex gallery moves to this day unexplored, has allowed the guerrillas to wage a subversive war.

Equipped for independent living, Odessa catacombs served as a hiding place for troops of the regular army and forces of the anti-fascist resistance. Here, in the underground city near Odessa, there was even a kind of record: the team of the Moscow office of the NKVD, locked in the catacombs of Moldavanka, was in the maze of more than 13 months.

a Large and very poor experience of the underground war was acquired by the Americans in Vietnam. Vietnamese guerrillas had dug a network of underground utilities that had successfully been hiding. To deal with them in 1966, U.S. forces have even created special units, called “tunnel rats”.

It was a very difficult task to smoke the Viet Cong out of the ground. In addition to fire and lobusek “tunnel rats” could have waited also snakes and Scorpions, which the guerrillas specially incited. Such methods have led to the fact that among the “tunnel rats” was a very high mortality rate. The holes returned only half of the whole.

Surprisingly, a system of underground tunnels was built by Viet Cong with such diligence that in these kind of underground cities people waited American bombing entire villages. Here even held school showed theatrical performances and “cool movie”. For low-growing natives tunnels was a convenient means of communication, while the “Yankees” often could not even turn around in the winding passages.

to Deal humanely with this “scourge” of American troops could not. Cu Chi, the “iron triangle” – the area where you had dug the catacombs, the Americans in the end just destroyed by bombing B-52.

Practice the use of underground space has gained a new urgency in our time. An extensive network of underground tunnels with well-developed infrastructure, electricity, communication, sometimes running water and even prayer rooms are still used today by Hamas militants in armed confrontations with the Israeli army. The underground tactics of the war although it has ancient roots, still have not developed a clear system of countermeasures. This is already today concerned, including the Pentagon.

About the existence of entire underground cities that are built in the U.S., said former Pentagon official Philip Schneider, James Casbolt and Tim Weiner. This project is called DUMBS and develops yet in the 40-ies of the last century.

In December last year, the Pentagon on one of its official websites posted a query about existing at the time the technology for conducting an underground war, from PPE to special drilling rigs. The most likely opponent in this hypothetical war is Russia, because our country’s strategic storage, command posts and communications of the state Reserve is under the ground.