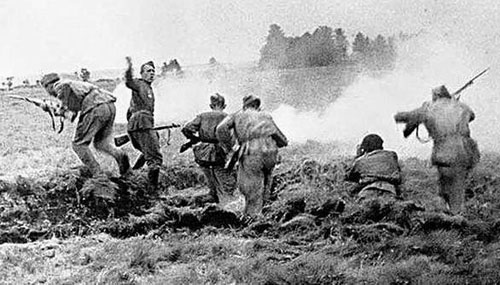 Counts the number of missing Soviet soldiers during the great Patriotic war is still underway. However, given the lack of information and inconsistency of some information, and it will not be easy.

the Complexity of the calculation

Almost every Russian family has relatives that went missing during the great Patriotic war without a trace. To learn the fate of many of them is no longer possible. So, still missing is considered to be a talented military pilot Leonid Khrushchev – the son of the first Secretary of the Central Committee of the CPSU (1953-1964 gg.), Nikita Khrushchev.

from 1966 To 1968, calculation of human losses in the great Patriotic war was conducted by the Commission of the General staff, in 1988-1993 mixing and testing of materials all the previous commissions had engaged a team of military historians. Despite this, we still don’t know exactly how many died in the war Soviet soldiers and officers, moreover, there is no accurate data on the number of missing.

Today, the official acknowledged data loss, which was published in 1993 by a group of researchers under the guidance of the consultant of the Military memorial center of the Armed forces of the Russian Federation Grigory Krivosheev. However, the doctor of historical Sciences Makhmut Gareev does not consider these final data, finding estimates Committee many flaws. In particular, some researchers figure the total losses of the Soviet Union during the war at 26.6 million called incorrectly.

Writer Rafael Grugman points to a number of pitfalls, which drew the attention of the Commission and to represent the difficulty for any researcher. In particular, the Commission did not consider such category of persons as policemen and Vlasov, killed partisans killed in battles with the red Army. What types of losses they attributed to the dead or missingm missing? Or even attributed to the camp of the enemy?

Often in front-line reports of missing persons were United with the prisoners that are currently making a considerable confusion in their calculation. For example, it is not clear who ranked not returned from the captivity of the soldiers among them were killed, and joined the enemy, and the remaining abroad.

Very often missing were added to the list with the total number of losses. So, after the Kiev defensive operation (1941) missing attributed to killed and captured – a total of more than 616 thousand people.

today, there are a lot of unmarked graves, buried Soviet soldiers, and it is unclear how many of them are missing. We should not forget about the deserters. According to official data, about 500 thousand mobilized disappeared on the way to the military.

Another problem – the almost total destruction in 1950-ies of registration cards for reservists and enlisted personnel of the red army. So we don’t know the real number mobilized during the great Patriotic war, which complicates the calculation of real losses and the allocation among them of the category “missing”.

the results of the fundamental research group Krivosheeva personnel losses of the Soviet Armed forces in hostilities for the period from 1918 to 1989 were published in the book “grief secrecy lifted. Losses of the Armed forces in wars, combat operations and military conflicts”.

In particular, it says that during the years of the great Patriotic war (including during the campaign in the far East against Japan in 1945) total irrevocable demographic losses (killed, missing, captured and never returned from it, died from wounds, disease and accidents) of the Soviet Armed forces together with the border and internal troops 8 million 668 thousand 400 people.

But there are researchers who bring the scale of the Soviet losses to unimaginable quantities. The most impressive figures gives the writer and historian Boris Sokolov, who estimated the total number of deaths in the Armed forces of the USSR in 1941-1945 26.4 million while German losses on the Soviet-German front 2.6 million (a ratio of 10:1). All victims of the great Patriotic war of the Soviet citizens, he counted 46 million.

However, the official science calls such calculations are absurd because in all the years of the war including the pre-war number of troops were mobilized no more than 34.5 million people, of which direct participants in the war were about 27 million. Based on statistics for Sokolov, the Soviet Union finished off the enemy forces just a few hundred thousand military, that does not fit with the realities of war.

Not returned from the war

Group Krivosheeva has carried out a statistical study of a large array of archival documents and other materials containing information about casualties in the army and Navy, border and internal troops of the NKVD. Initially, the number of irrecoverable losses of soldiers and officers during the war, was determined to be approximately 11.5 million people.

Later, from this number were eliminated 939,7 thousand troops, posted in the beginning of the war as missing, but again enlisted in the army in the liberated from the occupation of the territory. Deducted from their calculations, the researchers and 1 million 836 thousand former soldiers who after the war returned from captivity.

After long calculation, reconciliation with different sources, in particular, with reports of troops and the repatriation of bodies of the category of irretrievable losses bought the figure of 8 million 668 thousand 400 people. The number of missing and in captivity, the Commission has estimated in 3 million of 396.4 thousand.

it is Known that in the first months of the war was a substantial loss, the nature of which is not documented (for information about them gathered afterwards, including the German archives). They made 1 million 162.6 mln thousand. Where them to take? It resolved, military personnel, missing and in captivity. In the end it turned out 4 million 559 thousand people.

Russian writer and journalist Leonid Radzikhovsky calls this figure is too high and writes his 1 million 783 thousand 300 people. However, it is not all the prisoners, and not only back home.

Many Soviet citizens in the first months of the war were on the occupied territory of the USSR. According to German sources, by may 1943 70 thousand Soviet citizens, mostly from among prisoners of war, served in the Military police administration and about 300 thousand – in police teams. Only representatives of the Turkic and Caucasian peoples in the German military formations, there were about 150 thousand people.

After the war, part of Soviet citizens who sided with the enemy were repatriated and removed from the category of losses. But some part was missing, dying or not wishing to return home. This raises methodological problem faced by researchers. If getting captured Soviet soldiers rightly counted our losses, therefore, after enlisting in the German army and the police can be credited to the account of the enemy? While this is a debatable issue.

Even more difficult to qualify given up for missing Soviet prisoners of war, some of which are deliberately moved to the side of the Reich. Among them, including about 100 thousand Latvians, 36 thousand of Lithuanians and 10 thousand Estonians. Can it be considered an irretrievable loss? The clarification of this issue will have a significant impact on the results of calculation are missing.

Return the names of the

In January 2009 in Saint-Petersburg at the meeting of the Russian organizing Committee “Victory” in the data on the number of missing persons was announced by the President of the Russian Federation. Those who were not able to find neither among the dead nor among the former prisoners of war, was 2.4 million people. Also remain unknown IME6 million soldiers from 9.5 million, which was 47 thousands in mass graves on the territory of our country and abroad.

it is Curious that data on the number of missing Soviet soldiers coincide with the number of those in the German army. In the German radiotelegram coming from the Department of accounting of the losses of the Wehrmacht on may 22, 1945, in front of the category “missing” is marked by a figure of 2.4 million.

Many independent researchers believe that the real figure of missing Soviet soldiers is much higher than the official. This is evidenced by the analysis of books of Memory, where approximately half of the citizens, drafted into the red Army and never returned from the war, marked as missing.

Candidate of military Sciences Lev Lopukhovsky believes that the official data the results of the group Krivosheeva underestimated by 5-6 million people. According to him, the Commission did not take into account the huge category of servicemen, militia, dead, missing and captured, and that at least 4 million.

Losses in the category of “missing” Lopukhovsky encouraged to compare data narcoticcontaining archive of the Ministry of defence. Only the number of missing sergeants and soldiers there are more than 7 million people. The names of these servicemen are recorded in the reports of commanders of military units (1 720 951 people) and credentials of the military (5 435 311).

All of this suggests that a more or less exact figures showing the number of missing Soviet military, no. Today missing soldiers and officers, as well as unburied properly, but takes into account the losses of the military and are the main object of activity for Russian search movement. It should be noted that to date, the Russian search teams returned the names of about 28 thousand soldiers previously missing.