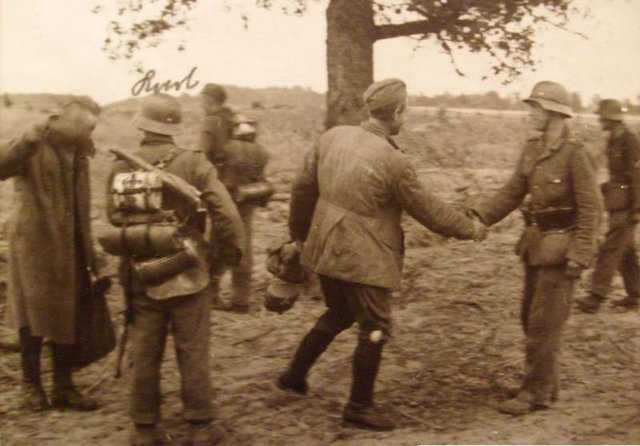 the Great Patriotic war became the great test for the country and for each person individually. Not all of it survived. This is evidenced by the phenomenon, which has long preferred to remain silent – desertion.

the Law during the war provided a clear punishment for desertion – the highest measure (article 193, paragraph 7-10 of the Criminal code of the RSFSR). However, the threat of execution and confiscation of property was not always a barrier to breaking the law.

Only in the period from the beginning of the war until late 1941, the NKVD arrested more than 710 thousand deserters and more than 71 thousand draft Dodgers. The first case of desertion was recorded on 1 July 1941 at the Orenburg railway, when the rookie jumped off at a moving military transport.

it is Very difficult to count the total number of deserters of the red army for the entire period of the war, so it is not possible to establish what number of dead soldiers chose to leave the arrangement of parts, without regard to or missing. However, Degtev and D. M. Zefirov, in his book “All for the front?” cited similar statistics: the number of deserters 1.7 million, Dodgers – 2.5 million. These figures are generally confirmed by other sources. During the war for desertion was convicted nearly a million people were executed, more than 150,000.

not willing to Fight!

What made the Soviet soldiers to evade the sacred duty? One of the main reasons historians call the split in society brought about by the October revolution.

“For the Communists will not go to war to protect reptiles will not!”, – said the resident of Ryazan region M. Volodin. Ideological opponents or victims of the Soviet regime obviously did not want to die for the interests of their enemies. And some of them openly hope for a drop nanovisenjoy your regime.

“Dear son, bread is not given for a month, assistance is not provided, firewood is not allowed. Do not pay attention that you three a decorated <...> what are we fighting?”, – the words of the mother of one of the soldiers imbued with a grudge against local authorities.

Indeed, the difficult environment and bureaucratic abuses have set the stage for the anti-Soviet sentiment, not only in the rear but at the front.
Shied away from serving the military service for ideological or religious reasons. Deserted, seeking to join their relatives in the occupied territory. However, though the majority did not want to defend the Fatherland did it made a mundane reason – out of fear for his own life.

in order For the reservist could legally stay in the rear, it was necessary to the reservation – a document exempt from sending to the front. First book has given highly skilled professionals in strategically important defence industries and the economy – the country as never needed them. The reservation was also extended to some representatives of science, culture, art and sports.

Often due to unscrupulous officials your booking was received by the people without any right to it, but with sufficient amount of money, or position. Last time received wide publicity “the Case of the brothers Starostin” – known players, who thanks to his connections bought from the front of about 60 people.

More than just “booked” it was in Moscow – about 45% of the total number of conscripts. For comparison, in the cities of Western Siberia, their number does not exceed 28%, and in rural areas – 5%. Such figures have led some researchers to claim that the main merit of the great victory belongs to the peasants, almost all of them sent to the front.

not on the front!

Exemption from military service and received the right condition. That’s all you did was etched, forwere raised by self-harm, shoot, simulating a wound. First the sick and injured were sent to the infirmary, and there, if you’re lucky, demobilized.
To obtain the coveted reservation, some went into a huddle with the doctors. The amount of 5 thousand rubles helped to get life-saving diagnosis, for example, “schizophrenia” or “tuberculosis”, which was permanently exempted from military service.

documented cases for the money, the staff introduced to the objector under the skin injection of gasoline: it raised a tumor, and this allowed a long time to be treated.

But the Dodgers could do without medical help: having the right amount of money or forging official stamp, they received a bogus document. Often passed variant of the “loss” of military ID. Believe in the word: instead of Dodger received a new document a different name and an unblemished reputation.
Money or food aid were readily accepted by some employees of military-registration tables. They are referring to the confusion of the account, destroy the card for military service or just shifted their records from one filing to another.

Supreme power seriously is only a problem 18 Nov 1944 when Beria in his report to Stalin said that “uncovered the illegal release by the military enlistment office and employees of the military-medical commissions of military service in the red Army.”

Ways to avoid getting to the front were varied. They sometimes gave rise to absurd lengths. For example, in April 1943, during the inspection of the barn in one of the Uzbek villages, the police spooked a flock of sheep, except one, are wrapped in a sheep’s skin deserter.

a short distance was discovered a Inamov, which is more years hiding from law enforcement in the stork’s nest.

the Desertion has become a favorable environment for the prosperity of the robbery: 56% of all robberies and robberies at the hands of deserters. A huge number of armed groups acted on not occupied territorystories of the Soviet Union, robbing of peasants, attacking food convoys and warehouses. In Saratov for 2 years could not cope with the gang lugovskogo-Bizyaeva, which has carried out almost daily burdened with murders of daring raids on government offices and shops.

In connection with the emergency wartime departments of the NKVD and later the “SMERSH” was endowed with special powers, including the right of execution of traitors on the spot. The large-scale operation on search and capture of the deserters had been conducted during the summer and early fall of 1944. Then the result of the efforts of the NKVD, NKGB and “SMERSH” were arrested 171 thousand fugitives. Nearly 104 thousand poisoned to the front.

Contrary to popular belief the Soviet government in relation to deserters and draft Dodgers trying to be the most loyal. For example, in relation to the thief, automatic razlagova she was too humane. After conviction with a 10-year suspended sentence he was sent to the front to “atonement”, but he escaped. The offender was caught a second time and after the pronouncement of the new sentence again sent to fight. The story of the escape and the condemnation was repeated twice! In the end, in bitter Proportions cobble together a band, and traces of it disappear.

This seemingly strange case due to the elementary lack of manpower in the great Patriotic war, and the authorities preferred to send deserters to the front than to keep them in prison. Moreover organs of “SMERSH” stopped deeds of those soldiers who distinguished themselves in battle and thereby confirmed their courage and loyalty oaths.