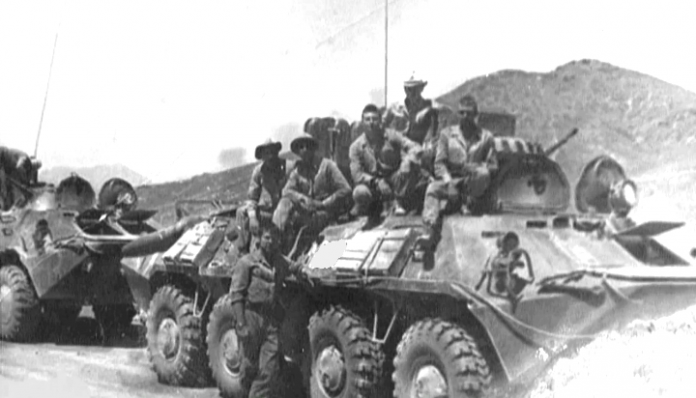 Participation in the Afghan conflict has resulted in our country tens of thousands of dead and maimed soldiers. But there is also the economic side of the war. Her numbers are impressive.

Today, in the eyes of most experts the decision about participation of the USSR in the internal Afghan conflict was completely unnecessary step. The sacrifice of ideology in the war had brought thousands of young lives. Irretrievable human losses (killed, died as a result of wounds or disease missing) amounted to about 26 000 people. But the Afghan war brought losses and other plan – economic.

March 19, 1979, Brezhnev, summing up the three-day Afghan discussion topics, noted that “we now ought not to get involved in this war.” But, according to the Secretary General, the country could help the Afghan comrades “everything you need”, in other words, to allocate as much material and financial resources, how many would require a solution to the Afghan problem. In the end, the Soviet Union was involved in this war in full.

Many experts believe that the Afghan war has become “an unbearable burden” for the Soviet economy, triggering the country’s deepest crisis. In foreign publications wrote that “a comparatively low price was able to force the Soviet Union to go to the huge expense of the Finance and material resources.”

American political scientist Zbigniew Brzezinski argued that “the protracted war in Afghanistan 1979-1989 greatly undermined the capacity of the USSR”. A Russian economist Yegor Gaidar believed that this war was one of the decisive factors “the death of the Empire”.

note that the economic Soviet aid to Afghanistan began long before the war. By 1979 the Soviet Union free of charge built in Afghanistan 73 of the object and continued the construction even 638. In addition, assistance was provided by the lines of the party and the security services, which on the Afghan side payment is not provided.

With the beginning of the war burden on the financial resources of the Soviet Union significantly increased and continued to increase every year. Moreover, there were unexpected losses in the budget. So, the United States, as sanctions embargo on the deliveries from the USSR of grain in 1980 deprived our country $ 2 billion.

However, the Soviet Union in the late seventies had a powerful enough economic reserves to withstand the increased burden on the budget. Major General in reserve, PhD Vladimir puffins came to the conclusion that the “Afghan factor could not cause destabilization of the Soviet economy and the subsequent collapse of the Soviet Union”.

the Turn of 1970-80-ies was marked by abnormally high by historical standards, the prices of oil, which reached $ 35 per barrel (adjusted for inflation, of $ 93 for 2000 years). For example, in 1970 the price per barrel of black gold fell to $ 3. Thus, the annual revenue from the export of Soviet oil to the States of the OECD (an international economic organization of developed countries) at the turn of the 1979-1980-x reaches impressive figures – over 25 billion.

Yegor Gaidar in this occasion wrote: “the Flow of monetary resources from the sale of oil allowed to stop the growing crisis of food supply to cities, to increase purchases of equipment and consumer goods, ensured a financial basis of increasing the arms race to achieve nuclear parity with the United States and helped to launch such foreign adventures as the war in Afghanistan.”

“there was no chance that the arms race can exhaust Soviet material and intellectual RESARVI”, – adds Vladimir puffins. Despite the fact that by the end of the Afghan campaign spending on the maintenance of the Soviet troops has increased manifold, General Boris Gromov (at the time commander of the 40th army) said that “the absolute value of costs not accounted for any significant portion of the Gross National Product, neither the national budget nor the deficit of those years”.

In the American encyclopedia “War in the middle East” States that to support the Kabul government of the USSR budget annually spend $ 800 million. Thus the content of the 40th army and the conduct of combat operations of the Soviet budget allocated annually from 3 to 8.2 billion dollars, – says the publication.

According to the testimony of Alexander Mayorov, who served in 1980-1981 as chief military adviser in Afghanistan, “the war cost the Soviet Union 1.5-2 million rubles a day.”

But there have been attempts for more detailed study of the financial losses of the country in Afghanistan. First of all we are talking about the report of the group of economists under the leadership of Prime Minister of the USSR Nikolay Ryzhkov, “On the costs of running the Afghan war in 1984-1987”, which was compiled on the orders of Mikhail Gorbachev.

Ryzhkov’s Economists group in conjunction with specialists from different ministries and departments painstakingly calculated “how much it cost us Afghanistan.” In their calculations, economists included literally everything: training of Afghan students in Soviet universities, the cost of the travel of civilian experts in Afghanistan, the number of civil and military equipment transferred to the government of this country. Was even included all flights of “Aeroflot” in the Republic of Afghanistan after the victory of the April revolution 1978. Experts also calculated expenditures on food limited contingent of Soviet troops and the costs of various types of ammunition.

However, Ryzhkov didn’t manage to bring a large-scale work to its logical conclusion. The political situation in the Soviet Union had suddenly changed and the materials collected by the Commission for whatever reason was unpublished. According to Boris Gromov, “probably incomplete statistics were so shocking that it decided not to publish. Obviously, currently no one is able to give an exact figure, which could characterize the costs of the Soviet Union for the maintenance of the Afghan revolution”.

At the end of 1980-ies authentically known only to the size of humanitarian assistance, delivered by our state to Afghanistan. In the report it was reported that in the period from 1978 to 1990, training costs national professional personnel of Afghanistan, to help in the acquisition and use of new technologies, on concessional lending of the Afghan government, and to grant aid amounted to 8 billion 48 million convertible rubles.

And yet more detailed statistics of expenditure of the USSR in the Afghan war there. Military historian Alexander Lyakhovsky, in his book “Tragedy and valor of Afghanistan” gives a certificate, signed by Ryzhkov addressed to Gorbachev, in which are some of the results mentioned in the report.

According to the certificate the total financial costs of the USSR in the war in Afghanistan has steadily increased: in 1984 they amounted to 1 billion 578 million rubles in 1985 to 2 billion 623 million in 1986 to 3 billion 650 million, in 1987 – 5 billion 374 million on Data for 1987 may be confirmed by a certificate of the state planning Commission “On the material expenditure of the USSR in Afghanistan”, but there is this figure less than 4 billion 116 million.

the Lion’s share of total spending was for maintenance and security of the Soviet troops. So, in 1987 it was spent 3 billion 955 million. Statistics of spending on the maintenance of the Afghan army looks modest – 703,8 million RUB over the same 1987. The total average daily costs of the war peak of 1987 year on average is estimated at 14.7 million.

In General, over the period from 1984 to 1987, the group reports Ryzhkov spent over 30 billion rubles. Marshal Sergei Akhromeyev, former chief of the General staff, based on its sources, cited statistics of expenditure of the USSR for 10 years of war. In his opinion, the final figures could reach 36.7 billion rubles.

it is interesting to compare the figures of expenditure of the USSR in the conduct of the Afghan war with some of the costs of the United States to participate in the same conflict. So, according to American researchers, total expenditure of U.S. support to the Afghan armed opposition during the war can reach 3.7 billion dollars, and on the arms of Pakistan from the budget of the United States has spent at least $ 12.2 billion.

the Annual cost of the Afghan conflict in the United States corresponds to approximately 0.2% of GDP in 1990, while the share of the Soviet cost of the war amounted to about 3% of GDP for the same year.