Home Breaking Mexico loses another battle for 44 pieces of pre-columbian art that was... 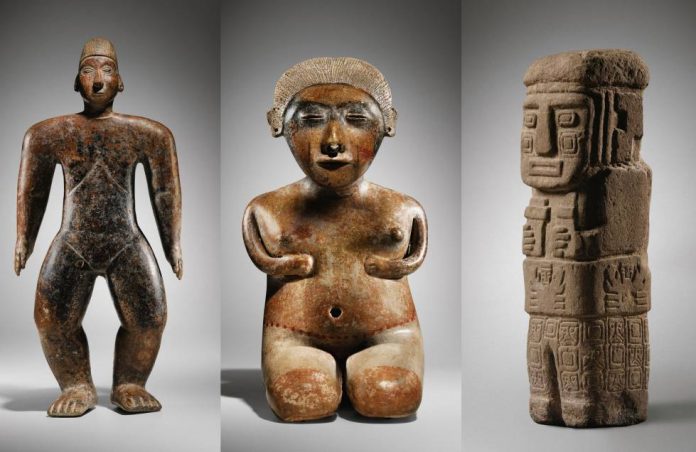 Mexico seems to be defeated in the struggle for the recovery of pre-columbian art. The us Government has lost a new battle over the sale in France of a collection with pieces from the cultures mayan, olmec, aztec, zapotec and teotihuacana. Sotheby’s has auctioned off the night of Wednesday, 44 objects, only 60% of the collection that was offered in Paris. Sufficient to intensify the gap diplomatic open between the two countries from the dispute by allowing the marketing of pre-columbian objects. The secretary of mexican Culture, Alejandra Frausto has described the French legislation as “very hostile” to the recovery of cultural heritage and it has emphasised the need to convey to the international community the message that “the value of property to expropriate, it is not economic, but cultural”.

Mexico fails to curb an auction in France of pre-columbian art Chimalli, shield aztec who returned from Austria to A foreign god in the heart of the mayan world

A spoon olmec sold at $ 8,400, a vessel maya 110,000 and a stone mask of culture teotihuacana to a 153,000, were some of the pieces auctioned. The catalog contained statues until a funeral urn. “This great set of pre-columbian art is a testimony to the refined taste of a French collector whose life was defined by the aesthetics and the integrity of the art,” said Sotheby’s, that he would not broadcast the name of the former owner.

The collection was composed of 74 items from most of the cultural heritage of mexican, as they say, the authorities of this country. Some had been placed under suspicion. Of the 57 parts that Mexico has been claimed as one’s own, 35 have been identified as authentically pre-hispanic. 22 were judged as imitations of recent manufacture. In spite of this, the sale has left a fund of $ 1.9 million. “This collection embodies the beauty and soul of these two great civilizations”, promoted the british home.

The inaction of the French authorities before the marketing of these objects generates little sympathy in the mexican Government. “The Embassy of Mexico in France and the ministry of Foreign Affairs reprove the auction of pieces of pre-hispanic art organized by Sotheby’s in Paris,” published this Wednesday by the foreign ministry in a statement. The ministry of Foreign Affairs made the request formally to the british company not to auction the pieces, but the response was negative.

“Those cultures are not dead, their heirs are alive,” said Frausto on Wednesday. Simultaneously to the auction, the secretary of Culture was appearing in the Senate on the progress in your area since the arrival of Andrés Manuel López Obrador of the Government. One of the points to discuss in the Congress was that the Executive has been referred to as a “fight against the smuggling of historical heritage”. “There are 85 pieces in the process of repatriation. We acknowledge the close collaboration of the united States, Italy and Germany, which are in line with this policy, but unfortunately all is not well,” she said before announcing what was happening in Paris. “It’s one of the things that hurt us,” he insisted.

The mexican authorities still relamen the wounds left by a similar episode last September on the that could not stop the auction, also in France, 120 pre-columbian pieces. As well as they did on that occasion, the National Institute of Anthropology and History, it raised the issue and filed complaints with the French Ministry of Justice. In none of the two cases, Mexico received a reply.

The possibility of Mexico to reclaim the heritage that is located on the outside he is shipwrecked in the absence of agreements that facilitate the transfer of goods between different countries. A limitation that reduces the number of achievements of the mexican Government. “It is necessary to proceed to the ratification of international conventions that strengthen the mechanisms to claim the recovery of the pieces,” said Frausto.