Home Breaking Move inland a beacon in Danish to avoid being swallowed up by... 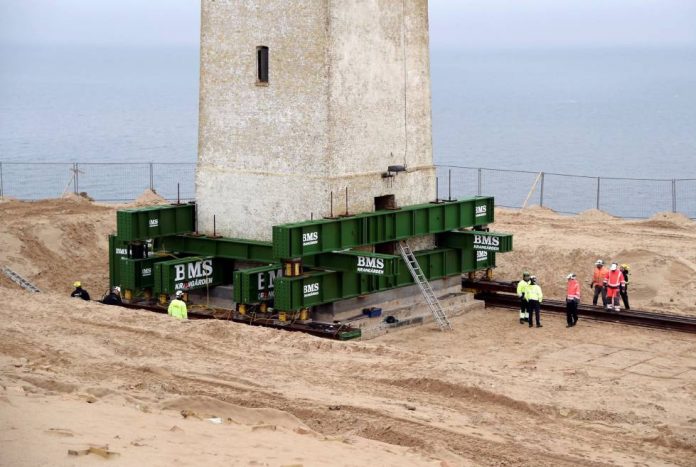 The centennial lighthouse of Rubjerg Knude, located in the northwest of Denmark, has begun to be moved inland Tuesday in a complex operation of engineering to avoid being swallowed up by the sea in a few years by erosion.

The operation started this morning with the rising of the construction, of 700 tons of weight and who will be displaced through a few rails placed beneath the lighthouse to complete a transfer of 80 meters, which is estimated to last about ten hours.

The lighthouse, which is located to the north of the peninsula of Jutland between the towns of Lønstrup and Løkken, was built in 1899, 200 metres from the North sea coast and came into operation a year later.

The local authorities decided, however, in 1968, to stop using it by the advancing dunes and the museum opened years after the building was abandoned in 2002 to be swallowed up in part by these.

According to the calculations of engineers, the lighthouse was located just six metres from the edge of a slope above the sea, and, not having made the transfer, could have fallen into the water in between five and ten years.

The operation has gathered thousands of onlookers and is being broadcast live by various means of digital danes, among them public television, DR.

The lighthouse of Rubjerg Knude is one of the major tourist attractions of the area and annually receives about 250,000 visitors.