Home Breaking Of Vietnam to the United Kingdom: 36,000 euros for a long journey... 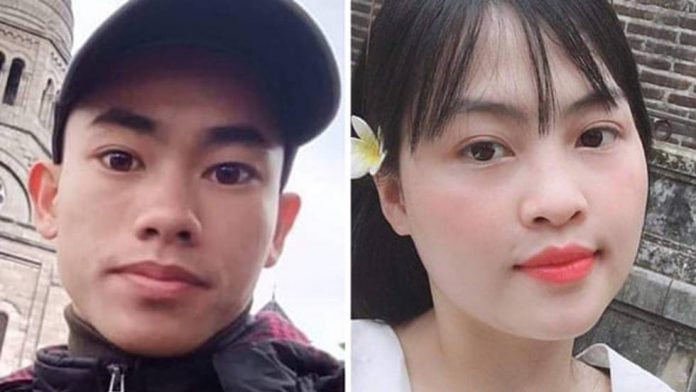 “The transportation of your child to England suffered an accident. I’m sorry.” The male vietnamese who telephoned to the house of Nguyen Dinh Gia, in the rural province of Nghe An, last Thursday, gave no further details before hanging up. Has not called again; the son of Nguyen Dinh Luong, 20 years, has not given signs of life, although the family tried to contact him frantically. Since then, his father assumes that the boy is one of the 39 victims of human trafficking that the british Police found that day, dead in the back of a truck, frozen in Grays, 31 kilometres from London.

“sorry, mom. I have not had success in my journey. I am dying because I can’t breathe,” The british police found 39 bodies in a truck in an industrial area of Essex

has not Yet been possible to confirm officially the identity of any of the victims (31 men and 8 women), although each time there is more certainty that the majority were vietnamese. According to the media of this country, there are already 24 families in the provinces of Nghe An and Ha Tinh which have denounced the disappearance of loved ones —the youngest, a boy of 15 years— that they planned to move to the Uk last week. The vietnamese authorities have asked DNA samples to cross-check these with the corpses and try to identify them. In addition to those detained in british territory, four people have been arrested in the country of southeast asia in connection with the case. Those arrested, between 40 and 60 years, have been accused of “arranging or forcing other people to travel abroad or work abroad illegally.”

Among those who have already provided their DNA are the family of Pham Thi Tra My, the 26-year-old shortly before the truck arrived at the industrial estate where he was found sent out a touching message in which was leaving and warned his mother: “I can not breathe”. His father, Pham Van Thin, has explained to the digital VNExpress that they took in to see the text because the mother did not realize that I had received it; only saw it a day after, when the brother of the girl he tried to call her. “No one picked up the phone”.

Tra My, remember his family, had left the university to seek work in Japan. But he returned to Vietnam with the idea of going to Europe, from where it hoped to be able to save more to send higher amounts to his own: he was the youngest of three brothers, the two largest without stable employment. “I advised you to stay at home and marry, but I said that I wanted to go to work to earn money to get us out of poverty, and then already think of a wedding,” recounts her mother, Nguyen Thi Tennis, also to the half-vietnamese.

Nguyen Dinh Luong (left) and Pham Thi Tra My, whose family members fear that they are among the victims.

Vietnam, a country of 97 million people, has experienced a great economic slump in the last 30 years. But the distribution of its fruits has been very uneven and has left important pockets of poverty in rural areas. Each year, thousands of people are put in the hands of networks of smugglers to try to reach Europe, where they believe they will be able to find well-paid jobs and lift their families out of poverty. The United Kingdom, where there is a significant vietnamese community, is one of the preferred destinations. In the last 10 years, the british authorities have identified 3.187 vietnamese, adults and children, as potential victims of trafficking. Although the actual numbers may be much higher.

According to Mimi Vu, independent expert on trafficking in persons from Vietnam, this country “is systematically among the three first positions of traffic of adults in the United Kingdom. But not only is it the traffic between Vietnam and the United Kingdom. Is the traffic from Vietnam, through Russia, Ukraine, Poland, France, the Czech Republic and others to the United Kingdom”. The countries of continental Europe, explains, used to be only places of transit. But as London has tightened control of its borders, begins to be more common that these immigrants end up staying in them. According to her, “Europe should do much more” to combat this trafficking.

The majority of those who aspire to go to Europe are male. 65% of the vietnamese who come to the Uk are adults and children of the male sex, according to Vu. “All handled by the organized crime in Berlin, Moscow, Prague, Paris… Is a very specific, and the journey to get to the United Kingdom is much longer. There is a service of smuggling behind it,” he says.

According to the report, Precarious Journeys: Mapping Vulnerabilities of Trafficking from Vietnam to Europe, three NGOS, many are exploited during the long journey, in industries like construction or work in clandestine workshops of counterfeit fashion brands. His first stop are the product markets for vietnamese in the cities where this community is great. Although the areas where they are most commonly exploited are the establishments of manicure and cultivation of cannabis.

The tortuous path, which varies according to increases the vigilance in the different borders —according to the report, are increasingly being detected routes to Europe through South America— can take years to reach the promised land. First, even in Vietnam, the families must pay the mafias, the cost of smuggling. About 950 million dong, the equivalent of 36,000 euros. An amount unaffordable to a peasant in a country where the average salary of a worker is 140 euros per month. To assume it, contracts a debt, often with their own mafias, which pays to work in the different stages of the journey.

The odyssey of Dinh Luong, as he has told his father to VNExpress, it is classic. A native of Thanh Loc in Nghe An, we got into debt in order for 18,000 euros —the other half, payable when you get to the Uk— to get to Europe with some security. Flew in August of 2017 from Vietnam to Moscow (probably with fake documents). From there, in other transport modes —typically trucks, cars, or even walking part of the way— to the Ukraine, to continue their journey towards the European Union. Germany in the case of the young man. In April of 2018 came to France.

Worked for a year and two months in a restaurant run by fellow countrymen. He won, account of his father, about 1,900 euros per month. Part sent home. Part going to pay the debt.

on October 10, Nguyen received a call from her son. “He said that the debt was almost paid off, and that I wanted to work doing manicures in a beauty salon, he would earn three or four more times. He said that he had contacted vietnamese in Europe, which had promised to bring her to the Uk. If you were successful, parents would have to send the money”, it has to VNExpress.

family recalls Nguyen, should not worry: Dinh Luong was not going to opt for the cheap option —“straw”, in the jargon of the trafficking networks, but the VIP, more expensive but more comfortable and guaranteed.

Or so he thought. If it is to meet the fears of their father, Dinh Luong ended, as the immigrants that paid less, in the container of the truck with registration Bulgarian to cross the English channel, on a route that the vehicle began in the port of Zeebrugge, in Belgium. The 24 came the warning call.

We Will, of 30 years, he followed a different path, told by his father, He Yuan, also of the province of Nghe An. The second of their children they left you three months, first to Malaysia, then to a long list of european countries. The October 21, called from France to tell you that I was leaving for the Uk. “I told him that he cared and that warned you when you were on the way. I do not know who was going, he only told me that it would cost thousands of dollars. I went to the bank and drew out what I could. I now have a distress huge. My family is very worried,” explained the digital vietnamese.

“The great majority of the population of Vietnam was born after 1975 [when the war ended with the united States]. Are people very young, very ambitious and very impatient. The traditional routes, go to school, get a job, go climbing, take a long time, and they want to make money immediately, already. And [the gangs] they sell these dreams: ‘Oh, you can win a lot of money in China, you can earn a lot of money in the Uk, just that you pay $ 40,000 and already’. There is a whole mafia behind it, and not to grow”, says Vu.

The only way to put the brakes, according to the expert, is prevention. To tackle the factors that increase vulnerability to trafficking: lack of education, poverty, gender inequality and discrimination towards minorities. “If atajamos these problems, he argues, also contribute to the development of Vietnam in general”.

A detainee in Ireland for sending to Belgium by the container

The strands of the strip the police of Essex (United Kingdom) to unravel the case of the 39 bodies found in the interior of a truck constantly carry to Ireland. The responsible of the research have revealed that during the weekend stopped in the port of Dublin, a man of 23-year-old native of Northern Ireland. It would be the carrier that sent —from a place that is unknown— up to the belgian port of Zeebrugge the container, in which were discovered the 39 bodies.

The detainee is Eamon Harrison. He was arrested Saturday upon his arrival to Dublin from the French territory, for a matter unrelated to the investigation of the hanging of a warrant of arrest. In 2009 he was sentenced to two and a half years in prison for trying to smuggle from the british port of Dover to the French town of Calais to 1,180 cartons of cigarettes hidden in pallets of fruit. It is not clear at this point that Harrison had knowledge that your container was going to be used for the illegal trafficking of immigrants. This is already the fifth person arrested in the course of the investigation. Three of them have been released on bail. The prime suspect, Mo Robinson, 25, who made the last journey with the container until they left in early morning at an industrial estate to the east of London, has appeared today by video link before the court and has not requested bail. Has been accused of 39 charges of homicide and conspiracy to traffic persons.