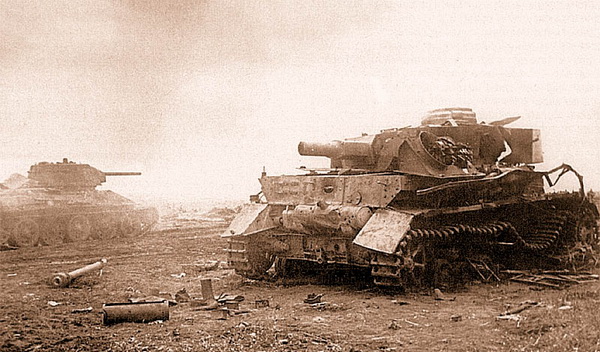 the battle of Kursk was the last chance the German army to turn the tide of the war. But for various reasons this did not happen. After July 1943, the Germans will retreat.

the Late spring of 1943 the Soviet army was not very successful. Rapid onset, which was conducted after the victory at Stalingrad was gradually losing his strength and, eventually, dried up. This allowed the Germans not only breath, but to return to Kharkov and Belgorod. Moreover, the Germans continued to hold their positions just 280 kilometers from the Soviet capital.
By this time otodvinuvshis to the West, the front line drew an almost flat strip from Leningrad to Taganrog. Only in the region of Kursk, where the Soviet troops penetrated deeply into the enemy, formed a projection area of over 65 thousand square kilometers, almost comparable with the territory of such a country as Ireland.
This ledge with one hand seriously interfere with communications between army group “Center” and “South”, but the other carried a real threat concentrated the Soviet group. Approved by Hitler on 15 April 1943, operation Citadel was to surround the Soviet troops in the Kursk area, to deprive the Red Army’s most combat-ready units and to launch a new offensive to the East. But the plans of the Reich was not to be.

field Marshal Erich von Manstein reported to Hitler that the forces of army group “South” were not enough to solve assigned tasks in the Kursk direction. An experienced military commander suggested to go to the strategic defensive: leave the Donbass and Kharkov, to redeploy troops to the West, to result in a sudden counter-offensive to strike the Soviet armies defeated.
inspector-General of armored troops Heinz Guderian and is convinced that to attack the German armyabsolutely not necessary, it will be enough to wear down the opponent. But the Fuhrer was not going to wait until the initiative passed into the hands of the red Army, and preparations for operation “Citadel” has entered the active phase.
However, during the development of the plan of attack became clear that what was the beginning of the operation, the Wehrmacht did not have time to make up for losses in manpower and technology. However, Hitler was adamant: “I decided as soon as conditions allow for the weather to conduct an offensive “Citadel” — the first occurrence this year. This attack becomes decisive. It should be completed rapid and decisive success.”

the Surprise came out

the Soviet command did not sit idly by, and using intelligence data and information from the frontline intelligence, analyzed the possible scenarios of development of events. Valuable information was obtained through working for Soviet intelligence British dushirovanie John Cairncross, which reported about the operation “Citadel”. “Germany intends to deploy a large-scale offensive in the region of Kursk and the eagle and take the ultimate revenge for the defeat at Stalingrad,” gave carncross.
By the way, many German historians still hold the view that the battle of Kursk was lost due to the successful actions of Soviet agents. They are still haunted by the fact that the Soviet command learned about the date of occurrence of the Wehrmacht just a day after she was notified of the German generals.
Already in the Bud “operation Citadel”, stripped of the element of surprise, had little chance of success. Soviet troops to the beginning of the German attack managed to build up some defensive lines by digging thousands of kilometres of anti-tank ditches and trenches, to equip the firing points and set a mine trap.
Expanding in the area of the planned strike three fronts (Central and Voronezh reserve – Steppe) command of the red army had built a strong defensive fist, which had almost double the advantage before the Wehrmacht in living manpower and equipment.

the German command was extremely surprised by the willingness of Soviet troops to repel the attack, but nevertheless the Germans continued to operate in a predictable, in particular using the same strategy as in the summer of 1941. However, the enemy was much colder and more organized than two years ago. Skillfully using armored vehicles and aircraft, he was able to take a series of pre-emptive strikes are completely confusing the plans of the German General staff.
General Walter Wenck noted that by 7 July 1943, only 3 Panzer division of the Wehrmacht had lost more than 67% of their machines, and by the end of the operation “Citadel”, the loss of tanks in different parts of the German army reached 70-80%.
“as a result of the failure of the offensive “Citadel” we suffered a decisive defeat, wrote in his memoirs Guderian. – Armored forces, supplemented with great difficulty, due to large losses in technology for a long time was incapacitated. Needless to say, the Russians hastened to use its success. And even on the Eastern front was not calm days. The initiative has completely passed to the enemy.”
Historians believe that the failure of the German offensive at Kursk to blame, and the German air force, which failed to win air supremacy. During defensive fighting Soviet pilots were able to destroy more than 1.5 thousand aircraft of the Luftwaffe, then how their own losses amounted to 460 cars. In the battle of Kursk the Germans first felt the full power of the Soviet attack and bomber aircraft.

the Tigers did not save

do Not lose hope for victory, Hitler seriously counted on the new samples of armored vehicles, which were massively used in the eve of the operation “Citadel”. The German car really made a strong impression on the Soviet forces, and allies. Although heavy tank T-VI (“Tiger”) already knew Soviet designers since 1942, however, his armor proved too tough “the thirty.”
the Situation on the fields of tank battles for our armortechnology has certainly facilitated by the fact that “Tiger” was not so much. On the Northern fase Kursk bulge at the beginning of the German offensive were attended by only forty-five tanks of this type on the South a little over a hundred. The case on 8 July 1943, damaged the “Tiger” of unterscharfuhrer SS Franz Staudacher single-handedly repelled an attack by about 50 tanks T-34 and T-70, while knocking out 22 Soviet armored vehicles.
But self-propelled artillery unit (SAU) “Ferdinand” created by Porsche and stuffed with engines Maybach, quite disappointing. Ferdinand showed himself in the destruction of Soviet tanks, but he was vulnerable: in addition to the powerful guns, no other weapons on the installation was not. Didn’t save the car and followed the infantry pulling far ahead she actually framed them under heavy enemy fire. When such tactics “Ferdinand” had no time to go back and again move forward, spending on these raids much-needed fuel. As a result, if the vehicle is not undermined on a mine, left without fuel it was destroyed by the Germans during the retreat.
Failed was recognized as the debut of another new car – T-V (“Panther”). This model proved to be vulnerable to fire 76-mm and 45-mm tank and antitank guns on the main ranges of combat, its tower repeatedly punched 45-mm sub-caliber and 76-mm armor-piercing projectiles.

the sum of the factors

Despite some local success, the operation “Citadel” was a complete failure of Hitler’s command. A major offensive has not led as intended to breakthrough the Soviet defence, on the contrary, it caused an irreversible process resulting in loss of previously conquered positions.
the German generals began feverishly to patch the hole, passing UD hit after another. For a short period, Soviet troops liberated Belgorod, Orel, Bryansk, Kharkov, Chernigov, Donetsk, Poltava, pushing the Germans to the line of the Dnieper.
as a result, the German command had finally lost the ability to pursue Strastrategic offensive operation, and the local counter-offensive as “Watch on the Rhine” (1944), or operation at lake Balaton (1945), could not turn the tide of the war.
Marshal Zhukov rightly observed that all failures of Hitler, as always, hastened to shift the blame for failures “on the heads of their field marshals and generals. He removed them from their posts, replacing, in his opinion, more capable. Hitler did not understand that the failure of a major strategic operation depends not only on the commanders, and is mainly determined by a large amount of strategic military, political, moral and material factors.” And they are in the summer of 1943 was not on the side of Germany.