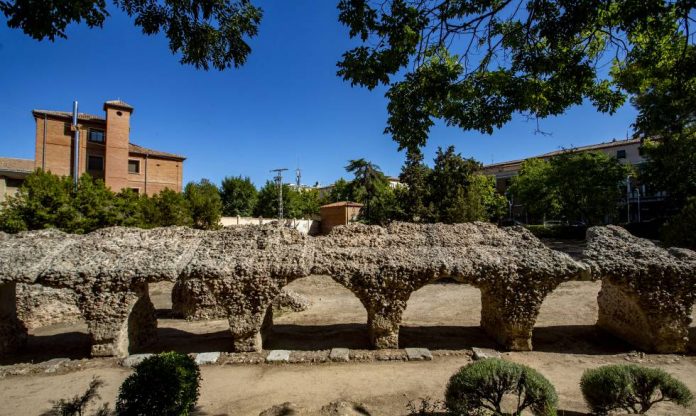 In a place of Toledo, whose name is the Vega Baja, lie buried the remains and legends of the capital of visigothic kingdom of Hispania. The city was, after Constantinople, the most important city of the Mediterranean from the sixth century. Contemporary of the mythical court of King Arthur, the remains of the city’s visigoth were buried by the passage of centuries, the invasions of the enemy, and the floods of the Tagus, and so it had remained until our days, protected under the floor by the mantle, safe from oblivion.

During that time, in the land of its site, is buried arabs and christians, were cultured gardens, built churches and convents, and, finally, Carlos III built the Weapons Factory, transformed in our days into an extraordinary university campus. Thus, next to the Tagus river and at the foot of the imposing heaviness rocky of the city, formed a unique landscape, in the words of Cossío, constitutes one of the essential elements of the heritage of Toledo.

The dream millennium of the capital of visigoth arrived in 2006 to its end: there was a charming prince who came to wake the sleepy town to unravel its mysteries, but a real estate project with no more ambition than the profit, which sought to drown any vestige that remains of the past up to the bottom most depths of the earth, under the weight of the concrete with a few snatched all your landscape, the traces of the memory and historical symbols.

He wanted to ignore the fact that the Vega Baja was protected as the soil is not constructible from the General Instructions of the General Directorate of Fine Arts, 1968, collected in all zoning regulations later, and that in the declaration of Toledo as a world Heritage site by the UNESCO also established this protection to defend your landscape. It was considered wrongly that the historic city was solely that it was within the walled city and the new city, to integrate planning, had to be extended for the las vegas del Tajo, occupying all spaces not built up, as if in the heart of Madrid needed to build the Retreat to connect surrounding neighborhoods or on the outskirts, to develop the Casa de Campo and El Pardo.

The City of Toledo decided to make a significant speculative business, consisting of the reclassification of the public lands of the Vega Baja to sell to three of the major property developers in the city, despite the fact that, months before the transmission, in 95% of the nearly 300 tasting sessions carried out in the solar, they had discovered the remains of high archaeological potential. Joined the operation two housing cooperatives in order to add a touch of cosmetic populist. With this privatization of public land is destroying a fundamental part of the historic landscape of Toledo, was raging in the archaeological remains of the first capital of Spain, and privatizing them some land that belonged to all the people from toledo.

The march 2, 2006, when the privatization process seemed to be irreversible since it had already been made to sell the land, I gave a speech in the Teatro de Rojas in before the King Juan Carlos, the minister of Culture, Carmen Calvo, the president of the Board, José María Barreda, and the mayor, José Manuel Molina. I reported the fatal attack was committed against the Heritage landscape and archaeological of Toledo, and I added: “we Ask, with unwavering firmness, the conservation of the rich landscape, environmental and archaeological site of las vegas…” to “our generation will not charge with the responsibility of having destroyed the landscape of Toledo”.

The response Barreda surprised by the firmness of its position, and changed the course of events. He said: “The Government that I chair is absolutely committed to preserve and enhance the extraordinary heritage of Toledo, the well-known and that the archaeology has not yet been brought to light. The time has come in which we need to define what needs to be done to preserve the historic landscape and natural of Toledo, its vegas and its river”. I was the only one who knew that it was not an improvisation, because he had prior knowledge of my speech. The forces in play that are favorable to the speculative operation were few but powerful, hence we decided to alert the public opinion about the seriousness of what was brewing.

Outside of Spain, UNESCO expressed its serious concern for what was happening and began to move with the sluggishness of large bureaucracies. On the 25th of July, I called José María Barreda to tell me that the next day he would meet with President Zapatero, and to the output, in the Palace of the Moncloa, announced its decision to stop the project of the Vega Baja. I was asked to only report to the president of The English Court, which had planned to build a shopping center in Vega Baja, outlining the need to transfer to another place of the city. Located immediately to the Isidoro Alvarez. Without a moment’s hesitation I expressed support for the decision of Barreda and their conformity with the change of location. The July 26, 2006, to the surprise of own and strange, Barreda announced the stoppage of the project to build the Vega Baja. What is the situation today in the Vega Baja? Unfortunately the one that corresponds to thirteen years of negligence and abandonment of public responsibilities in the management of this area.

After retrieving the Public Administrations of his title, almost nothing has been done, what has given wings to this insidious campaign that attempts to dismiss that recovery in base to hold that in the Vega Baja there are no archaeological remains, as if his landscape were not alone enough to preserve it. The first step that you must take in the Vega Baja is sort and make public all the information of the different archaeological campaigns, putting the existing documentation at the disposal of those who want to see it. It is an exercise in forced transparency, and cause flushing, that in these years no one has been taken to do so. And above all, the Public competent Administrations have to agree with the utmost urgency, a Special Plan to save definitely the Vega Baja eliminating conclusively the current management that even allows you to build 1.785 housing.

That a prominent empresario toledano has been stated recently that the Vega Baja are only “four trenches and two coins”, denotes the renewed desire to make a real estate business at the expense of the main historic landscape of Toledo and the archaeological site of the first capital of Spain, as well as a profound insensitivity to cultural.I want to trust, and I trust, in that the Ministry of Culture, the Junta of Communities and the City, you can avoid the threats of the “new barbarians” —as John Elliott qualifies those who are threatening the Cultural Heritage—, and will address the final solution to the Vega Baja of Toledo imperative.[

Gregorio Marañon is a member of the Academy of Fine Arts of San Fernando[.