Home Breaking Peasants lynching in Russia: how it was actually 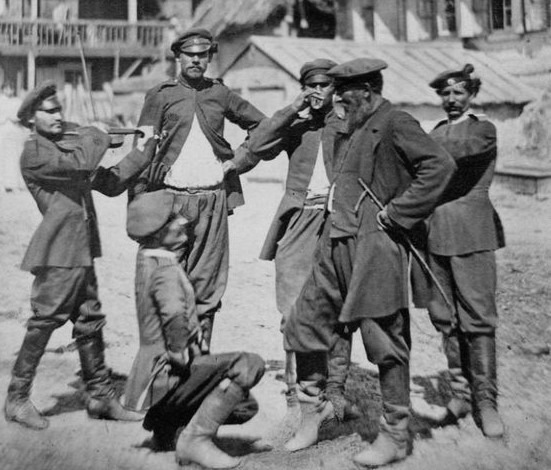 History 26/02/20 peasants lynching in Russia: how it was actually

In 1864, following the abolition of serfdom in Russia was followed by judicial reform. She was supposed to empower peasants to defend their rights. But the peasants until the Soviet times, the fair honored only lynching. Wild and cruel reprisals, which were perceived as fun, led to the horror of the tsarist police. And even mass executions could not dislodge from the head of the peasant the idea that only “their” judge is right and “godly.”

most Often judged gatherings, courts, parents and elders, neighbors. Punished thieves, horse thieves, adulterers and cut the family’s estate. Fault led through the village to the laughter and shouting, banging on tied on the back vorovannogo property, publicly flogged, tortured and even killed. The hardest thing for the farmer was a disgrace. Public disgrace were sometimes worse than death.

to Appease the gathering could be only one: feeding the whole village. For example, there was a case in Smolensk province. Came under suspicion for stealing oats a Michael Bukharin. The gathering brought together the elder said to him: “Confess and we forgive you!” Man confessed. Begged forgiveness, promised to “Belvedere” vodka. The vodka brought, to drink ran the whole village. As usual, not enough. Mikhaylo brought half a bucket to appease the villagers. When the vodka ran out once again, guys began to be indignant: “Now usacoe say that Robiskie vivsianyky each other oats steal. But for the fact that Yong a reputation put on our village, beat him, brothers, in the ear!” Fearing, Michael sons rushed home and locked the gate. But razzadorila men followed him, hoisted one of the peasants, he climbed the fence and unlocked the gate. Mikhailo had nothing to do but to withdraw and again to apologize, it’s what the men again asked for vodka. The owner said that no money has become a curse for men thieves and drunkards. And those angry, removed the wheels from the cart, standing in the yard, and drank them. This, too, was not enough. Mihailo brought to public disgrace: tied his oats on his back and led him through the village. After again threatened. He laid in the pub his retinue, brought more vodka, and only then, finally be drunk, the peasants calmed down.

Appeals to territorial authorities could turn to the Complainants even worse punishment. In the Oryol province was caught for stealing a canvas Anna Akulicheva. At the gathering decided to hold it at the village with the canvas on the back and drink her festive attire. Came to the yard, brought Anna. The festival was in a dressy shirt. Soiled shirt with tar, tied a woman with reins, tied the canvas and led through the village.

people came Running, but the laugh did not happen: Anna walked proudly, with head held high and contemptuous smiles. Brought her to the river, doused with water, but instead of voice, as expected, and forgiveness, Anna was silent, which caused General discontent. Brought her back home, but it was enough to untie the woman’s hands as she jumped up into the porch, grabbed the hook hanging on the chain and started beating everyone who’s arm she was caught. The mayor ordered to grab Anna and put under arrest in the barn, but she ran away from the angry mob. Farmers from another village had taught her to complain about the Zemstvo chief. He, after hearing the story, called the elder. The mayor confirmed it and said so de they have done for centuries. The headman was arrested for two days. Returning home, he gathered a gathering and told about the accusation, which hurt. Decided that Anna would punish her husband who will give her 30 strokes of the whip without mercy, and if you regret it and the risers. Anna also continue to show the world the contempt and spit in her direction. Brought a woman. The husband ordered her to lie down, but she stood, as if not hearing him. He grabbed his wife by the hair, dragged on the ground, grabbed her by the arms and legs two peasants and so kept until the husband beat ee with all his strength. Stopped only by the headman. Husband went to the house for the holiday attire of the wife to give it to sing, but it turned out that Anna has managed to hide it from relatives.

Since then, Anna is against the whole family, husband, every day was a fight with her. With grief she became a whore. The kids threw mud at her, just to spit in it – as it was agreed at the gathering, and she decided to leave. Vitreous my husband passport, walked away to eagle, and then moved to Odessa. Its history, as women brave, was narrated in “the Oryol Bulletin”.

spared the peasants and lordly servants. In the Saratov province in the village of Dolgorukovo lived in 1887, two sisters, widow. They kept the possessions, and rescue they were not from the local men who dragged all that bad lay. There was no such tin, which they would not have stolen. Lovely sugar factory turned into a wreck, or the Manager himself had them to steal, or beat it in a safe place mercilessly. The sisters wanted to sell the estate, but came here from Poland agronomist Stanislavski, who undertook to restore order. He was a brave, remarkable strength and for the first time, coming to the gathered peasants threatened them with a gun and a gun: “I know that you are all thieves! But now your robbery is over!” The peasants argue with him dared not: it was too strong, strangle a chicken. But I thought to myself to weave a conspiracy: if the pole you hurt someone, then run the world and beat it. A sign will be of a Church bell.

Once I reported that the farmers released their livestock on the Lord’s land (because they have always done) and the order to leave not react. Stanislavski himself came to him. Brandishing a gun, he demanded to divert the cattle, the crowd surrounded him, all shouting, especially trying one plyugavenky peasant, to which the Manager grabbed so hard and pulled his beard, that took a piece. He fell to the ground, yelled: kill! Immediately gave the command “fry flashes” boomed the Church bell, and thirst for reprisals, the peasants came out on the field.

upravlaushiy tried to retreat, promising to shoot anyone who gets in his way. The crowd hesitated, but some guy jumped on the back of the pole. He accidentally shot in the stomach standing next to the man. Destiny the Manager was solved. He tried to escape across the ravine, but the blood filled his face, and he noticed that behind the tree hiding with a pitchfork by one of the peasants. A man stabbed a pitchfork in the chest the Manager arrived, and the others tore him to pieces. Beat long and even the dead.

came to his Senses the next day and arrived before the investigators were justified: “Yes, I have it only with a twig!” The instigator was the centurion who first had to come to the aid of the Manager, but arrived on the field when it was all over. He was executed. Other desperate coward, not understanding why they are judged. 34 people were hanged, more than 100 were sent to prison. Until recently, the peasants were convinced that he had acted with the “greedy master” correctly.