Home Breaking Red terror: how many have actually been victims 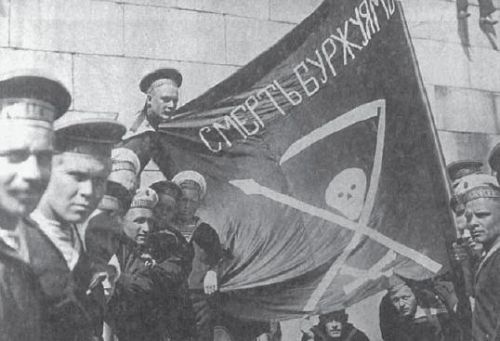 History 11/03/20 Red terror: how many have actually been victims

5 September 1918 the Council of people’s Commissars issued a decree on the beginning of the red terror. Harsh measures to retain power, mass shootings and arrests, hostage-taking, – still this bloody page of history is controversial.

the end justifies the means. This phrase, attributed to Machiavelli, was the unspoken justification for the actions of the Bolsheviks during the red terror. The Soviet government propagated the myth that the red terror was a response to the so-called “white terror”. September 2, 1918, the VTSIK adopted a resolution in which the term “red terror”: “In the white terror of the enemies of the workers and peasants’ government the workers and peasants will respond to a mass red terror against the bourgeoisie and its agents”. The decree, initiated mass executions were a response to the murder of Volodarsky and Uritsky, a response to the attempt on Lenin.

“White terror” and “Red terror” – the phenomenon of different order. The red terror was brought under a strong ideological base, it was officially legalized crime. S. P. Melgunov in his book “Red terror,” wrote: “it is Impossible to shed more human blood than did the Bolsheviks; it is impossible to imagine a more cynical form than that in which is clothed the Bolshevik terror. This system, which found their ideologues; it is a system of systematic implementation of violence, this is the apotheosis of open murder as an instrument of power, which is not reached yet never one power in the world. It’s not the excesses that can be found in the psychology of the civil war something or other explanation.”

Immediately after the attempt on Lenin in Petrograd was executed 512 people, prison was not enough, there was a system of concentration camps. Legitimate mass red terror did not go to any comparison with the atrocities the “white” which also took place but were not institutionalized remedyTATUS, but rather a manifestation of the so-called “ataman”.

Despite its official date: 5 Sep 1918 – 6 Nov 1918 red terror is quite blurry chronological boundaries. The red terror was defined by Trotsky as “a weapon, used against the doomed class which does not want to die.” Thus, the start time of the red revolutionary terror can now be considered as 1901. From 1901 to 1911, the victims of revolutionary terror were about 17 thousand people. February 21, 1918 the CPC issued a decree “the Socialist Fatherland is in danger!”, which decrees that “enemy agents, speculators, gromily, hooligans, counterrevolutionary propagandists, the German spies are shot at the scene of the crime.” 9 August 1918 Lenin wrote: “it is Necessary to produce a merciless mass terror against kulaks, priests and white guards; the dubious locked up in a concentration camp outside the city. Dicrateria and enforce fully disarming the population, shoot on the spot ruthlessly for any hidden rifle”. We need to understand such instructions were given before the official start of the “red terror”, the fist and the questionable element could be considered any decision on the affiliation of man to the counter-revolutionaries were “on the ground”. By the end of the Civil war in the concentration camps was 50 thousand people. The end of “red terror” – also very conditional date. Mass repressions of the 30s – whether it is possible and to relate them to the “red terror”? In this respect the historians debate to this day.

Myths of the red terror

the Red terror has generated a lot of myths. So, one of the myths was the myth that the “red people drowned in barges”. The source of this myth became witnesses of how the rebel officers in Petrograd forcibly driven onto the barge. Popular rumor turned this barge in “last refuge”, whereas the one who was on the historic barge (it was a one barge) later wrote that they, the prisoners on the barge were taken to Kronstadt, where they could apply for German patronage. Such mythmaking has existed everywhere and was even on hand the Bolsheviks, the cruelty of the measures which had prevented any “counter-revolutionary reaction”.

the Perception of the red terror as the class struggle was far from ambiguous.

M. Lacis wrote: “We are exterminating unwanted classes of people. Don’t look for the investigation of materials and evidence that the accused acted in word or deed against the Soviets. The first question – to what class he belongs, what he origin, upbringing, education or profession. These questions should determine the fate of the accused. This is the meaning and essence of the red terror.”

Word Lacis was critically evaluated by Lenin. “Political distrust of the bourgeois apparatus is lawful and necessary. Failure to use them for business management and construction is the height of folly, bearing the greatest harm to communism. Who would want to recommend a Menshevik as a socialist or as a political leader, or even as a political adviser, he would have made a huge mistake, for the history of the revolution in Russia proved conclusively that the Mensheviks (socialists-revolutionaries) are not socialists, the petty-bourgeois Democrats, each capable of a serious sharpening of class struggle between the proletariat and the bourgeoisie to side with the bourgeoisie”.

Latsis later recalled this episode: “Vladimir Ilyich reminded me that our task does not consist in the physical destruction of the bourgeoisie, and to eliminate the causes that give rise to the bourgeoisie.”

the Number of victims of terror

the number of victims of the red terror is another controversial issue. The discrepancy in the figures is very, very important from 135 thousand to 400-500 thousand people. It is significant that these disagreements are often caused by not even ideological approaches to the phenomenon of the red terror, and the fact that up withthen during archaeological excavations and construction work find mass graves.

an Unambiguous interpretation of the red terror can not be. There is no doubt that it was a bloody page of Russian history. The most fierce disputes are conducted on the basis of the national question. Participation in the revolutionary process of Jews, Latvians, poles provoke nationalist interpretations, leading to debate about a Jewish conspiracy against the Russian people. Gorky wrote: “the brutality of the forms of revolution, I explain the exceptional brutality of the Russian people.” The tragedy of the Russian revolution played out in the environment of “semi-humans”.”When the “atrocity” accused the leaders of the revolution – the group’s most active intellectuals – I consider this accusation as a lie and slander, is inevitable in the struggle of political parties or people who are honest – as honest mistake”. “The recent slave” – noticed elsewhere Bitter – became “the most unbridled despot.”

assessment of the “proletarian writer”, of course, far from objective, but you are right those who claim that the red terror is a product of the “Jewish conspiracy” and whether the conclusion of the red terror in the nationalist spirit?